Before her mother’s death in 1995, Angelica Osborne knew only a few things about her mother’s life in World War II-era Germany, before she married an American soldier and came to the United States.

She knew that her mother, Margit Chinkes, had spent time in two Nazi concentration camps as a teenager. Her mother had also talked about how she might have died of starvation if the commander of one camp, whose office she cleaned, had not left her a slice of bread in his desk drawer every day.

One other story Margit told her children was that a Gypsy woman on the train to the first concentration camp read her fortune and told her she would not die in the camp. Those and a few other fragments were all Osborne knew, and when she decided she needed to memorialize her mother’s experiences after she died, the facts barely filled a typewritten page.

She deepened her knowledge on a couple of subsequent visits to Germany and Austria, but Osborne, a devout Catholic, did not get serious about unraveling her mother’s story until 2014, when she went on a spiritual retreat.

During the retreat, she said, “I decided I really needed to write this book for my grandchildren. … I wanted them to know this history and to know where they came from.”

The book she referred to is “L’Chaim: Margit Chinkes’ Holocaust Survival Story,” recently published by Farcountry Press in Helena.

It would be interesting enough if it were only the story of her mother’s heartbreaking experiences in Nazi Germany. But it is also a story with so many odd twists and turns, improbable characters and striking coincidences that a novelist would hesitate to use them. Consider:

♦ Her mother’s father, besides being a philanderer, was a notorious con man, called by an influential newspaper in 1953 the greatest swindler in West Germany.

♦ The story about the bread in the drawer was not only true; it turned out that the camp commander had been considered by his SS comrades to be too lax, and he was executed near the end of the war for neglecting his duty.

♦ When the war ended, Margit wandered away from the concentration camp and was taken in by a nearby farm family. She was so emaciated they couldn’t even tell her gender. She stayed with them eight months and they nursed her back to health.

♦ When Osborne and her husband, Tom, first visited Vienna, Margit’s birthplace in Austria, they learned that Margit’s mother had committed suicide by jumping off a bridge when Margit was just 8 months old. They also realized that in that large city, they had booked a room in a B&B just a few hundred feet from the bridge in question, and that Tom had jogged over the bridge the morning of their discovery. 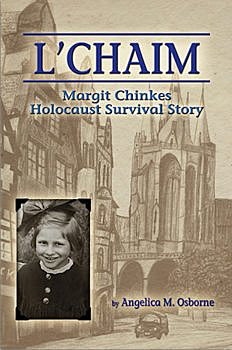 The “L’Chaim” in the book title is a Hebrew toast meaning “to life,” and it is fittingly attached to the story of Margit Chinkes. Despite all that happened to her, Osborne said, her mother always seemed to be happy, displayed no self-pity or bitterness and loved to celebrate her German heritage and culture.

Margit’s mother was a Polish Jew who was living in Vienna with her parents when she met and became intimate with Max Hugo Kuhner, known as Hugo, a German Lutheran. In an unpublished memoir, Hugo claimed to have later married Margit’s mother, but Osborne’s researches unearthed no mention of it in Vienna city archives or the city’s Jewish archives.

After her mother’s suicide, Margit was taken in by Hugo’s sister and mother. After the sister died, when Margit was 7, she and her grandmother went to live with Hugo.

Hugo, meanwhile, had had another daughter with a woman named Clara, then married a woman named Hanni. When Hugo was called into service with the German Army, his wife grew resentful of the presence of Hugo’s mother and daughter. The story Osborne pieced together was that Hugo’s wife told a neighbor that Margit was half Jewish, and the neighbor reported it to the government.

And that is why Margit, at the age of 14, was arrested by SS agents on the streets of Frankfurt am Main and sent off to the Ravensbruck Concentration Camp in the summer of 1944. She endured constant deprivation and horrific experiences, including a “death march” from one camp to another in the closing days of the war.

By pure luck, she left the first concentration camp just as a gas chamber was being built there, then transferred back while the chamber was being demolished to hide evidence of Nazi atrocities from advancing Russian troops.

Margit was only 15 when she joined seven other people who were supposed to be transported or smuggled from the Russian zone of Germany to the western zone. The man contracted to get them there took the other people across a major river, possibly the Elbe, then came back and said he’d take Margit over only if she submitted to him sexually. When she refused, he raped her several times.

Osborne learned that terrible secret, which Margit never mentioned, from one of her mother’s oldest and closest friends, Margot Turner.

Osborne pieced her mother’s history together from interviews with people like Turner, from visits to concentration camps and long researches in archives, Holocaust museums in Vienna and Berlin and the Holocaust Museum in Washington, D.C.

After the war, while Margit was attending the American House School in Frankfurt, she met a handsome 25-year-old American soldier named Angelo Pascetti. Osborne was born in Frankfurt in 1949, shortly before her parents were married.

Angelo went back to the states first, still in the Army. Margit had to stay on a few extra months to acquire the necessary papers, then sailed across the Atlantic with her young daughter to join her husband. They lived in New Mexico for a while, and then in Winton, Wyo., where Angelo was a coal miner.

They eventually moved to Leadville, Colo., where Angelo worked in a molybdenum mine for 29 years.

Osborne, for her part, worked as a registered nurse for 30 years, and her husband, Tom, was a hydrologist. They lived in Colorado when they were first married, and then Tom’s work took them to Montana. They lived in Lame Deer and Butte before moving to Billings, where they spent 21 years and raised their three children. They have lived just outside Absarokee for the past five years.

Osborne said she had never done any writing before, and writing a book about her mother “was a very painful experience for me.”  She received help from lots of friends and family members, including her husband and her younger daughter, Amber Majnik. Her other two children, Lucas and Julianna, were also supportive.

Osborne and her husband looked into self-publishing and publishing an e-book, but Osborne wanted a real book, and a well-made one, to give to her grandchildren. They decided to go with a Montana publisher, and Farcountry Press agreed to publish it.

Since the book came out, Osborne has done a presentation at her church and two presentations at Newman Elementary School in Billings, where several teachers had organized a Holocaust project. This fall, Osborne will address the annual conference of the Montana Teachers Association in Missoula.

Although she is careful to leave politics out of her presentations at schools, Osborne said, elsewhere she talks about how her mother’s story “is kind of pertinent to what’s going on in our country today,” when questions of intolerance and acceptance of immigrants are front and center again.

And for young people, particularly young women, she said, it’s important to know about people like her mother, who suffered so much and still managed to lead a happy, productive life.

As Osborne says in the book, “She always tried to face up to each situation with dignity and fortitude. Margit never wanted to be defined by her Holocaust experience but simply as another war survivor and immigrant who lived her life loving her family.”

You can order a copy of Osborne’s book by going to her website, or visiting the website of the Farcountry Press.