Looking to get fit for the New Year? Missoula is the place for you.

As it does every year around this time, SmartAsset released its “most fitness-friendly” places in America, placing Missoula second on the list.

This year, LaCrosse, Wisconsin, took the top honors, replacing Missoula in the No. 1 spot.

“Once again, it was Missoula and LaCrosse … pushing each other to the finish line,” this year’s study said. “Last year, Missoula came out on top. This year, the LaCrosse metro area took the honors.”

Missoula has appeared in the study’s top 10 for several years running, thanks in part to its hardy, self-powered commuters and its growing network of trails and dedicated bike lanes.

Pedestrian bridges over the Clark Fork River and Reserve Street, with its five lanes of traffic, don’t hurt.

Losing weight and eating healthy tend to rise to the top of many new year’s resolutions. According to the Centers for Disease Control and Protection. Nearly 40 percent of U.S. adults were obese in 2016.

But the study suggests that achieving a healthier lifestyle may be hindered by one’s built environment. All of the top 10 cities in this year’s study were located north of Colorado.

“Five of the bottom 10 least fitness-friendly cities are in Texas,” the study found. “These cities have low rates of people walking to work, and in some cities, the majority of restaurants are fast food joints.” 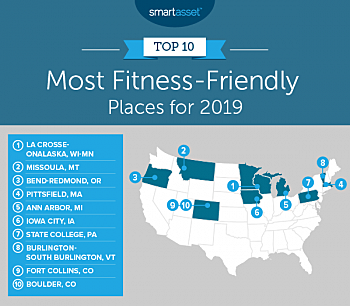 To compile its list, the study culled data from from several categories, including the percentage of people walking or biking to work, and the density of fitness-related businesses.

It also looked at the density of fast food restaurants and the hourly cost of a personal trainer.

“If outdoor trails aren’t enough for you, you have plenty of opportunities to hit the gym,” the study said of Missoula. “There are also 125 fitness businesses per 10,000 residents, the second-highest rate in the study.”