It was back in the 1920s when a plane appeared in the sky over David Thatcher’s family farm in eastern Montana and a dream was born. He would later leave that dryland farm in Rapelje and fulfill his flying wish as a member of the U.S. Army Air Corps assigned to the Doolittle Raiders.

Words like strength, honor and humility came easily to those who remembered the man who fulfilled his dreams, served his nation and died one month shy of his 95th birthday.

“If my dad were here today, he would very much appreciate this gesture, but he would quietly defer the recognition to others,” said Thatcher’s son, Jeff. “While many describe my dad as a hero, he didn’t see himself as one. Instead, he would say he was just doing his job.”

Thatcher enlisted in the Army Air Corps in 1940 after graduating high school. The Japanese attack on Pearl Harbor the following year set in motion a number of events that would change the course of history and the lives of those who made it.

As Thatcher himself put it during an interview played for Thursday’s crowd, his desire to fly prompted him to volunteer with an upstart bomber group for a high-risk mission. Those picked for the job would become known as the Doolittle Raiders.

Their assignment would see them fly a squadron of B-25 bombers over select Japanese targets. But like all good plans, theirs got off to a difficult start. Fearing their carrier group had been detected by Japanese radar pickets, they were instructed to take off without delay, never mind they were hundreds of miles further from the targets than planned.

Most knew they wouldn’t come home.

“I didn’t have time to be nervous,” Thatcher said in the interview. “As we approached Tokyo, there was quite a bit of anti-aircraft fire over the city, but it wasn’t accurate. We dropped our four bombs on (the Nippon Steel Factory) and got out of there.”

With their payload deployed, Thatcher’s B-25 followed the coast of Japan, then headed west toward China. Running low on fuel and with dark setting in, the pilot attempted a landing on a narrow stretch of beach, but clipped the sea waters with the landing gear.

The plane went into a spin, landing upside down in the water. Four crewmen were ejected through the nose of the aircraft in the crash. Thatcher, the tail gunner, was knocked unconscious and laid in the plane as it filled with water.

But as history now tells it, Thatcher later made it to shore and helped his crew avoid Japanese detection while reaching safety in China. His actions won him the Silver Star. It would take a bipartisan act of Congress nearly 80 years later to name Missoula’s VA clinic in his honor.

“His service as a member of the Doolittle Raid was remarkable and his selflessness and the caring of his crew mates didn’t go unnoticed,” Tester said. “David represents the very best of our nation.”

Acknowledging Thatcher’s wife, Dawn, who now represents the only surviving spouse of a Doolittle Raider – and holding a copy of the book “Thirty Seconds Over Tokyo – Daines offered his own thoughts on Thatcher’s service.

The bill dedicating the clinic in his name has been enshrined in the Congressional Record.

“When they had that first airstrike on Japan following Pearl Harbor, it lifted the morale and spirits of the American people during a dark time in our nation’s history,” Daines said. “I just can’t be prouder of David and what he did, and how he’ll be remembered.”

During the ceremony, Thatcher’s wife sat quietly in the front row, listening to the comments offered by speakers. Members of the veteran community thanked her, taking pictures and seeking autographs. “I think it’s real nice they did this,” she quietly said when asked for her thoughts.

Of the 16 bombers that took off that day in 1942, all but one were lost. As Lt. Col. Jimmy Doolittle sat on the wing of his destroyed B-25 in China, he considered the mission a failure. History would say otherwise.

“When I interviewed my dad in 2015 about the Doolittle Raid, I asked him if he was afraid, and he said no,” said Jeff. “He was confident in his training, and he was confident because the mission was being led by Jimmy Doolittle.”

Following the presentation, Tester and Daines joined members of the family in unveiling a bronzed plaque that now sits inside the door of the Missoula clinic, where thousands of Montana veterans receive care.

For Dr. Kathy Berger, director of the VA Montana Health Care System, the dedication found a fitting hero. Thatcher’s strength and courage, both as a service member and family man, “is the type of character each of us here at the VA should appreciate,” she said.

“We hope for future generations it will be a reminder of the sacrifices and contributions my father and other members of that generation made during a time of uncertainty and great challenges in our nation’s history,” Jeff said. “Despite those challenges, the men and women of that generation came together, sacrificing their individuality for the common good.” 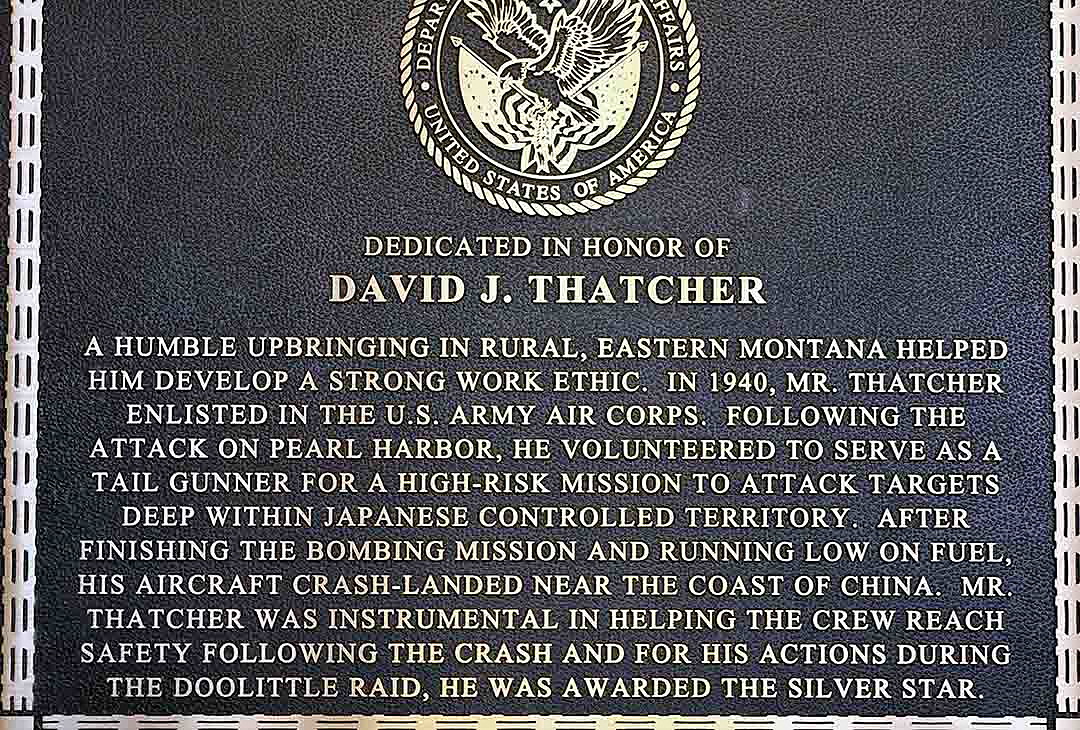