Having bid farewell to their conductor of the past 12 years, leaders of the Missoula Symphony Orchestra on Wednesday announced five finalists who will vie for the music director’s position in lengthy auditions over the next year.

As they did when Darko Butorac was selected as music director, the MSO’s Board of Directors will bring each of the five candidates to Missoula for a week during the 2019-2020 concert season.

While here, the finalists will lead the orchestra in rehearsals and then concerts featuring a program of music they’ve selected. At season’s end, the board will select the next conductor/music director of the Missoula Symphony Orchestra.

Here is the list of finalists – which for the first time includes a pair of women – plus the dates of the concerts they’ll present and information about their background released by the symphony. 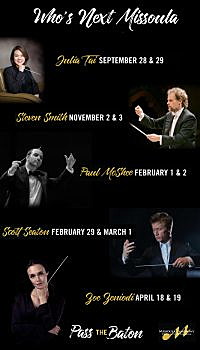 Julia Tai: September 28 – 29, 2019
Praised by the Seattle Times as “poised yet passionate,” Julia Tai is quickly becoming one of today’s most dynamic young conductors on the international stage, having conducted orchestras around the world. As the music director of Philharmonia Northwest, Julia Tai has established a reputation for her creative programming and community partnerships.

Paul McShee: February 1 – 2, 2020
Assistant professor and director of orchestral studies at UConn, Paul McShee is known for the remarkable blend of warmth, energy, and driving rhythmic vitality he evokes from any orchestra he conducts. As a passionate educator and advocate for both classical and new music, McShee has created numerous programs intended to encourage young people to open up to classical music.

Scott Seaton: February 29 – March 1, 2020
Scott Seaton is in his fourth season as music director of the North State Symphony in Northern California where he has garnered acclaim for his dynamic performances, innovative programming, and community and youth outreach. Seaton won the 2011 INTERAKTION competition and was given the opportunity to conduct an orchestra composed of all of Germany’s top orchestras.

Zoe Zeniodi: April 18 – 19, 2020
Zoe Zeniodi is the Principal Conductor of the Greek-Turkish Youth Orchestra. In 2016 she was selected by the Dallas Opera for the prestigious five-year Fellowship of the Institute of Women Conductors. Recent highlights include being the first woman to conduct at Opera Southwest and a Carnegie Hall Debut with the New England Symphonic Ensemble.