Ryan LaBar, a Montana native and ceramic artist commissioned to create an art installation in downtown Missoula, is a United States citizen and foreign national to China who lives in Jingdezhen, Jiangzi Province – the “porcelain capital of the world.”

He is healthy, but reports he is taking precautions to avoid contracting the coronavirus.

LaBar, 44, living in China under a cultural exchange visa, lives less than five hours from Wuhan, the central Chinese city where the coronavirus originated.

LaBar told the Missoula Current he feels confident he is safe and untouched by the disease. He grew up in Great Falls, earned a biology degree in 1998 from Gonzaga University and became a potter in Helena instead of enrolling in medical school. His parents are Missoula residents.

His art piece will be installed in the new HomeBase Montana-owned AC Hotel, replacing the former Firestone Tires on Main Street.

Missoula Current: How is the coronavirus situation is affecting you personally?

Ryan LaBar: I have lived in Jingdezhen, the porcelain capital of the world, for over four years now. I set up my personal studio here 3 years ago.

My studio is located in a renovated plate factory turned ceramic park, now home to museums, shops, restaurants, studios and a hotel. The park is currently closed to the public, as it’s a hot spot for the community to gather. Thankfully, I am allowed into my studio, where I spend the nights working on unfinished projects with looming deadlines.

The virus outbreak isn’t really affecting me so much. I stocked up on food supplies on the 24th (of January) and have been avoiding contact with the public. I am traveling to and from my studio (5 minutes apart) each day, back and forth … nothing more.

Because it’s spring festival time here, many businesses close. The closures were expected and because of the parallel of the outbreak with that of Chinese New Year, I was prepared. These businesses will remain close until the government gives a “green light.”

MC: Has your city and/or province evacuated?

LaBar: Jingdezhen has not been evacuated. I was told from the foreign affairs office here are only two reported cases, with one being cured. This number seems small, given that Jingdezhen has the population close to that of Philadelphia and we are only a 4.5-hour drive from the epicenter of Wuhan.

Days ago, I viewed a video of a person being carried out of their home on a stretcher with Hazmat team. It’s hard to say if this person was infected or not, and it’s hard to gauge the authenticity, but this home was said to be a few blocks from where I reside.

MC: How you are staying safe and healthy? What do you do to prevent getting the virus?

LaBar: I am staying away from the public and when I go out, I wear a mask and gloves. I am healthy and keeping informed on the situation. My undergrad degree work was in microbiology, and ever since being educated on that unseen world, I have always been a bit of a clean freak/hand washer. Now I can do that more.

MC: How would you describe the quality of information coming from the Chinese government about the virus for Americans/Montanans like you living independently in China?

LaBar: I have been following international news using a VPN (Virtual Private Network). I also follow the discussion and postings on WeChat (the social platform here). In addition, agencies (including the local foreign affairs office) have been good at giving me information while providing preventative measures to follow.

As with any government agency, it’s hard to know what is true. The same is true for all the information/stories out there. I remain objective and will not play into any social hysteria. I have been telling people that the hysteria could be worse to deal with than the outbreak itself.

Runs on the stores and hoarding of supplies when transportation is limited could create a problem. Not to mention, vigilante like protection tactics stemming from paranoia. I have a friend who was almost kicked out of his home upon returning from a 5-day trip to Sichuan Province.

MC: Have any of our Montana congressional delegation helped? What is the plan for getting you out of there if the virus spreads closer to you?

LaBar: Both offices of Senators Testor and Daines have reached out to me and provided direction if the situation worsens. I have relayed my concern to avoid crowded transportation methods in order to evacuate. Currently, I feel safe by adopting a more reclusive lifestyle.

I have enrolled in the STEP (Smart Traveler Enrollment Program), provided by the U.S. State Department that will connect me with the U.S. Embassy in Wuhan. That way, I will be notified of any new evacuation measures as the situation worsens. I also have contacts to both offices in case I need further assistance. Both offices were very helpful and showed concern. 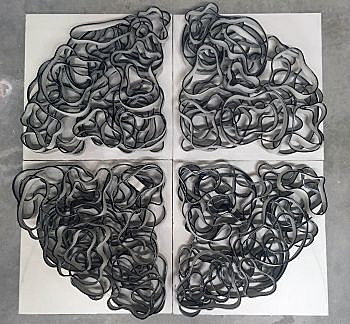 MC: Why you are living in China to do your ceramics art?

The studio when I arrived wasn’t finished and I made work that required multiple visits back to complete. Each time I came back, the more I wanted to stay. In the meantime, a couple of young entrepreneurs found me on Instagram and we decided to design and build a studio together.

This studio is located 50 meters from the international studio in Taoxichuan, a renovated plate factory turned ceramic art campus. The studio began as a place to host workshops from invited artists, but now has become my personal studio.

My original partners have moved to other projects and I am now the sole owner/operator. My work, over the years, has developed a presence in China and abroad. I can think of no better place for a ceramic artist to make his studio.

This city is the birthplace of porcelain and remains the most active ceramic city in the world. My medium and art is valued here and I have been quoted “I feel like a son returning home.”

The cost of living and making work here is very inexpensive. The international community of artists is broad and the city is still developing new multi-disciplined studios and programs. There is no better place for supporting the arts than here in Jingdezhen.

MC: Can you update us about the ceramic piece you are creating for the new AC Hotel?

LaBar: I was commissioned to create a piece for the new hotel where the old Firestone Tire Co was located. Trey Hill and Julia Galloway allowed me to use the University studio in Missoula to create the wall installation.

I made the piece last April/May and will install it when construction is completed. Jason Neal at the Radius Gallery who originally pitched the idea and commission to me made this possible.

I dream of Montana often and look at real estate literally every day from my computer in China. I hope to make a transition to Missoula as soon as I can afford to. It’s not easy getting a loan these days with an artist’s up-and-down income.

Also, my market is here. I am currently working on a project for a new Ritz-Carlton in Nanjing. I also was just picked up by a Paris gallery (Maison Rapin), who has and will be representing my works exclusively in Europe. My dream is to maintain two studios, one in Montana and the other in Jingdezhen.

MC: Can you share more of your professional background?

LaBar: I bought a home in Helena in 1999. There I found my community with the Archie Bray Foundation. I was working out of my basement studio. Many years later, in 2007, I was accepted as a graduate student at the University of Nebraska Lincoln.

Upon graduating, I was invited to become the program director of a ceramic art residency outside Joseph, Oregon. I was there until late 2014.  Then a year later, after spending some time in Portland, Oregon, making work at the Oregon College of Art and Craft, I was invited to China. I have been here ever since.