October 5, 1918 rumors began circulating in Missoula of two new Spanish influenza cases. One was said to be a woman in Orchard Homes, the other a man recently arrived from the East.

Police Chief Moore immediately reminded everyone the anti-spitting ordinance would be “rigidly enforced.” The ordinance (designed to prevent the spread of disease) declared it “unlawful for any person to expectorate on any sidewalk, highway, public or office building floor, public conveyance or street car floor, or stairway of public or office building in the city of Missoula.”

Within two days, however, it was clear Missoula would need more than an anti-spitting ordinance. Twenty five soldiers were quarantined at Fort Missoula.

Elsewhere in the state, Ritchey, Rapleje and Hingham were putting out telegraphic appeals for doctors.

By October 9, 1918, 28 cases were reported in Missoula. The city health officer ordered schools, churches and theaters closed (Nationwide, the motion picture industry announced it would stop distributing films the next week).

An unnamed prominent local physician was quoted in a Missoula paper as saying the cases were all “mild” and “the scare is out of all proportion to the present danger.”

It was probably good he was “unnamed” – within the next three days, 90 new cases were reported.

Then all hell broke loose.

The night of October 12, 1918, the Missoula Sentinel published an “Extra” with the text of a German peace offer – the Great War would be ending soon!

As the news spread, “…fire whistles in the city burst out into a din…” for more than two hours. “Thousands of persons flocked to the business section and joined in the extemporaneous jubilee.”

It was just what health officials feared, and had tried to prevent – a huge local gathering – and the consequences would be seen almost immediately. 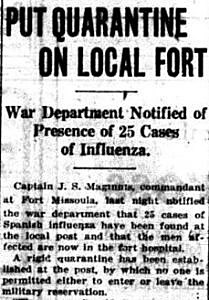 On October 26th, there were 44 new cases in Missoula – the next day, 36. The local headline read, “Only One Death as Flu Lessens.”

“Only one death.” That headline summed up a desperate situation.

It turns out that one death was the fourth member of the McClellan family. Mrs. Charles Kyllo was preceded in death by her mother and two sisters.

As bad as things were in Missoula, Butte had it worse.

By mid-November, national headlines declared, “More Americans Dead Of Flu Than In War.”

On December 1, 1918, a dispute between the city of Butte and county health officials threatened martial law to enforce quarantine and closure orders.

December 10th, Missoula ordered that placards be placed on “every house in which the disease exists,” and continued the prohibition of public gatherings, “including dances, theaters, schools, churches and lodge meetings,” although stores and saloons were allowed to serve small numbers of customers and chairs were ordered removed from saloons to encourage brief visits. “Lounging and loafing” were not allowed.

There were many sidebars to the daily coverage of the outbreak.

The editor of a small paper in Plentywood, called the Producers News, printed a letter to the editor in late 1918. H. L. Phinney complained the locals were “robbing the dead” with their over-priced caskets. The writer claimed you could get a complete funeral, including casket and hearse in the bigger cities for $50, versus local prices of more than $200. 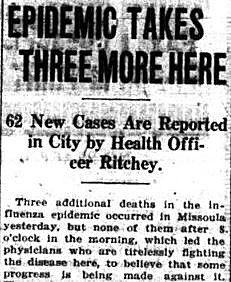 In the next issue of the paper, a front page story carried the headline, “Editor Taylor Is Assaulted.” It seems Mr. “M. M. Johnson, prominent undertaker and furniture merchant of Plentywood (who was also the county coroner) assaulted Editor Charles E. Taylor of the Producers News,” because Johnson felt the “letter to the editor” had cast him in a bad light.

The article continued, “Mr. Johnson got the worst of the encounter, getting off considerably easier than he probably would have, had it not been for the arrival on the scene of ladies and children.”

Today, while flu and pneumonia are still a serious matter, we have modern vaccinations for both, so we tend not to fear them as our parents and grandparents did.

But, it does give one pause. I don’t think I’ll whine that much, next time I get a cold or the flu. I am feeling much better this week. The coughing is about over; the nose is drying.

Jim Harmon is a retired journalist whose 50-year career included nearly three decades at KECI-TV, Missoula in roles ranging from news anchor to weather forecaster. In retirement, Jim is a landscape gardener and history buff who has spent years reading historical micro-film newspapers. You can read his weekly history column at the Missoula Current.