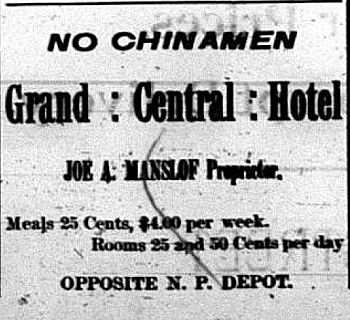 Discoveries made in the last year by University of Montana students in the 200 block of West Main Street have sparked a renewed interest in the brief history of Missoula’s Chinese community.

Hundreds of Chinese populated Missoula’s downtown Front and Main street areas from the town’s earliest days into the beginning of the twentieth century – peaking, according to census data, between 1880 and 1890 at 405. By 1900 it was half that at 208 and and by 1910, only 73.

The decline can be linked directly to the economy, politics and prejudice.

With dwindling gold discoveries, a tanking economy and the abrupt halt of railroad expansion, jobs were scarce in the late 1800s, leading to increasing prejudice against Asian immigrants. In 1882, Congress passed the Chinese Exclusion Act – barring, for the first time, a specific race of immigrants.

Missoula’s prejudice was as deep and as old as the city itself. Its first newspaper, in 1870, declared that manifest destiny demanded that the precious few jobs that there were belonged to “the free-born, large-souled and intelligent white men who have ever composed the glorious vanguard of American civilization,” not to “heathen Asiatic slaves.”

In 1885 the Missoulian newspaper called for ousting the undesirable element, “Drive them out. Do it peaceably and quietly, but do it.”

As a result, it is nearly impossible to find positive, or historically helpful, newspaper accounts of Chinese immigrants in the early days of Missoula. Among the very few exceptions was a story that shed light on both their hierarchy and lifestyle.

The Anaconda Standard sent one of its reporters to Missoula’s Chinese district on lower Main and Fronts streets in the early morning hours of February 5, 1894 to observe the beginning of the New Year celebration. He was accompanied by a Missoula police officer named White.

“The first place visited was the establishment of Chung Foy on West Front,” where they were offered “China gin and tea” as well as ten-inch-long cigars. There were also sweet cakes, oranges and fruit.

Then they observed a number of Chinese men making a concoction of “hard nuts resembling nutmegs (covered in) a bright red paste,” wrapped in big green leaves. The Chinese delighted in chewing these things, which they called “bin lung.”

The reporter, having declined the earlier offerings of gin and cigars, “felt duty bound to accept something and took the ‘bin lung.’ O, fatal step!” The reporter said he “tried to look as if he liked it. But he made a poor bluff of it.”

The newspaperman described the leaves as something like a “cross between tobacco and cocoa and are esteemed a luxury by the Chinamen who pay as high as $12 a pound for them.”

Next, the two visitors crossed over to Main Street “to the store of Ah Ping, who divides with Quang Wah the honor of being chief of the local Chinese colony in this city.” 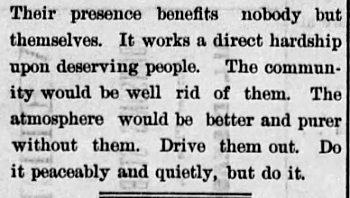 Described as a “little fat fellow who wears American clothes,” Ah Ping, on this particular morning, was “resplendent in a cream colored silk shirt and a butterfly tie of startling proportions.” He expressed pride in the community’s “extensive preparations” for the new year.

He told the reporter, “It has been a hard year, but we have made a little money and now we’ll have a good time.” About this time, “Old Fan,” as he was known, “emerged from a dark room, smelling strangely of ‘hop’ and blinking as he entered the light room.”

Fan was a member of Ah Ping’s household and “one of the best known Chinamen in the city.”

He simply said, “happy new year and then went back to his den.”

The next stop was the “Joss house (a Chinese temple), which was located in the second story of a brick building above the Star lodging house (one of madam Mary Gleim’s establishments).

“Up a narrow staircase full of stifling fumes of opium and firecrackers, through two small rooms fitted up for opium smoking and down a hallway, the visitors groped their way and finally entered the room where the Joss and his attendant priests, hold sway.

“The source of the wailing ‘music’ (was) a little old Chinaman (sitting) upon a stool. His wizened face screwed up into a knot and his eyes tightly closed, (he blew) like a leaky bellows upon an instrument that was a combination of a clarinet and coronet.

“He seemed to be satisfied with his production, but it was a fearful thing. Wagner would blush could he hear it. In the opposite corner was the Joss, in an elaborate shrine, before which was heaped a wealth of Chinese offerings. Money, fruit, pasties, rice, nuts, oil, and a host of other things. 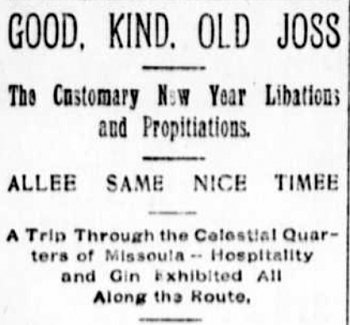 “A priest, wearing a blue cap with a red button on top, was busily burning prayers in front of the shrine. These two, the priest and the musician, were the only living occupants of the room and neither vouchsafed any notice of the two visitors, who speedily withdrew unable to endure the shrieking of the musician’s instrument.”

The reporter put his story to bed with a reference to an on-going feud between Chung Foy and Ah Sing, which had been dominating the local headlines – and the hope that what he’d learned that night of Chinese tradition would end the affray.

The two “came to blows the other night over the affections of a negro woman. They hate each other bitterly and, though Ah Sing has the inside track with the woman, he paid a police court fine the other day, and Chung Foy went free.

“The quarrel has not yet been patched up, but the Chinamen say that it will be before the new year’s feast closes. The new year will open with all debts canceled and all grievances forgotten – an excellent example to the Caucasian brethren of the heathen.”