Even before I began writing this story, I was attacked by a vicious earworm (a song you just can’t get out of your head). In researching the history of Missoula street names, I noticed that Orange Street at one time had four names. That’s all it took.

Orange Street, as we know it today, runs from Interstate 90 to the dogleg at Sacajawea Park, then morphs into Stephens Avenue. Same road, two names.

Historically, the street had two more names. Its northernmost end was originally called Urlin Avenue, after a city pioneer by the name of Alfred J. Urlin.

The Ontario native, following the gold strikes, arrived in Bannack in 1864. In his five-year stay there, he became involved in local government and eventually became the county’s treasurer.

Urlin set out for Missoula in 1870, where he took a bookkeeping job with Worden and Company and later tried his hand in the lumber business. He and Horace Brown set up the Missoula Lumber Company, believed to have been Missoula’s first planing mill – located near what is now the Orange Street interchange with I 90. 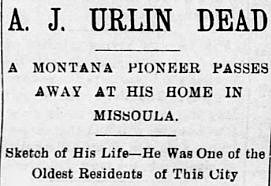 He left Missoula briefly, moving to Glendale, where operated a store and was married. But Missoula had won his heart, and he soon returned.

This time, he began a successful career in real estate (one of Missoula’s early plat maps shows the “Urlin Addition,” named after him). During that career, he donated the site for the Northern Pacific Hospital.

He served one term on the city council, being elected council president when sworn into office in 1894.

Back around 1887, Urlin had nearly been killed in a train derailment near Gold Creek and his health suffered the rest of his life. He died 10 years later, on May 24, 1897, when he suffered a brain inflammation following a tooth extraction.

Urlin’s portion of the street ran only from what is now the Interstate to the railroad underpass. The section from there south to the Orange Street Bridge had another moniker: Harris Street.

Lewis E. Harris was a longtime Missoula resident, said to have clerked in the old Higgins-Worden store for a time. Most of his life, though, was spent in the employ of the Northern Pacific Railroad.

He started with N.P. in 1895 at Grantsdale on the Bitter Root Branch of the railroad, transferring to Missoula in 1904 to become the chief clerk of the division storekeeper’s office. He also served as city clerk and school district #1 clerk for a few years in the early 1900s. He retired in the 1940s.

His life ended tragically on Saturday morning, June 11, 1949, when the 67-year-old man took off his coat and hat, and jumped off the Van Buren Street Bridge. 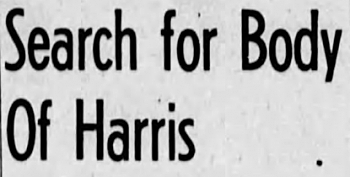 The incident was observed by a Missoula couple crossing the bridge at the time. They immediately flagged down a passing patrol car. The two officers were able to see the man still bobbing in the water, and called for more help.

Two transients, near the Milwaukee tracks, saw the man as well – but didn’t think anything of it. They told police they thought he was out for a swim. They yelled to him that the water was too cold for swimming, but they said the man just “took a mouthful of water and squirted it at them,” so they thought he was just joking.

Both Harris and Urlin became somewhat forgotten names by 1962 when the Missoula Police Department asked that the city consider eliminating some of the different names attached to that “street with four names.” After all, it was (and is) a single roadway, and the different names tended to confuse the public, visitors and the police department. 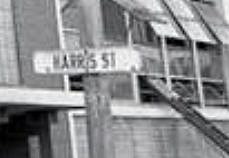 Three years later, the local chamber of commerce – also citing the confusion of too many names – petitioned the Missoula City Council to drop both “Urlin” and “Harris” streets from city maps, making both sections of the road Orange Street.

At the public hearing in July 1965, Councilman James P. Nugent (the father of current City Attorney Jim Nugent) informed his colleagues he had received only a single protest to the name change, from a person claiming Mr. Urlin would become forgotten to history. Besides, the protester asked, “Who is Mr. Orange?”

The council collectively admitted it had no idea who “Mr. Orange” was – if there even was a Mr. Orange – then promptly adopted the resolution “renaming Urlin, Harris and Orange streets and the Parkway Bridge to Orange Street and the Orange Street Bridge.”

There you have it – the history behind today’s Orange Street.

Except – well, technically – I should have called the earworm “a street with five names,” not four.

At the second dog-leg (the current intersection with Mount), Stephens actually used to transform into Middlesex Street. But, we’ve gone on long enough – and we must stop this vicious earworm.