There’s a plaque on the wall just inside the main entrance to the School of Music at the University of Montana.

Kathleen Kimble, who’s on the UM Jazz Advisory Board, says: “It’s funny how a person can walk by something for more than 40 years and only then suddenly see it.”

The plaque recognizes Lowndes Maury and his special contribution to the dedication ceremony for the building held on May 24, 1953.

Kimble wondered, “Who was Lowndes Maury?

According to a collection of his work in the Archives and Special Collections at the UM Mansfield Library,  Maury was born in 1911 in Butte and as a youngster “learned piano from his mother.” He apparently learned well.

The Big Timber Pioneer reported in 1926 that the teenager won “the gold medal (for piano duet with Eleanor McArthur) in the music division of the Montana Federation of Women’s Clubs.”

A few years later, Maury impressed Music Professor A.H. Weisberg at the University of Montana (then called MSU) who said, “I advised only two students to make music their life work,” and Lowndes Maury was one of them. 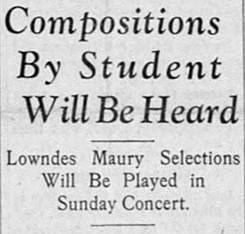 In Maury’s senior year in 1931, the Kaimin student newspaper detailed a concert by the University Symphony Orchestra under Weisberg’s direction which featured “four selections, one an overture … all of (which were) composed in the last few years by Lowndes Maury Jr.”

After graduating and completing further studies in Boston and Chicago, Maury “built a career in Hollywood as a pianist, composer-arranger and conductor,” according to biographical notes by Archives West.

“For a time, he worked as a composer, arranger, pianist and organist on twelve radio shows simultaneously, including the Eddie Cantor and Jack Haley shows ‘Life with Father’ and ‘The Life of Riley.’ He wrote film scores for Universal Pictures studios, for U.S. Air Force training films, and for the Mr. Magoo cartoons. He was also a contract pianist for Twentieth-Century Fox studios.”

In 1948, some of Maury’s “serious work” was featured on the Canadian Broadcasting company. The Montana Kaimin wrote, “The string ensemble will present his ‘Quintet for Piano and Strings’ and his new song-cycle entitled ‘Five Songs from The Book of Hours’ with lyrics by Rilke.”

On Sunday, May 25, 1953, MSU’s new music building, described by the Missoulian “as probably the outstanding structure for music education and music training in the nation,” was dedicated before a crowd of a couple hundred in a heavy downpour of rain.

Dorothy Green of Helena, MSU graduate, world-renowned violin instructor and performer, and longtime executive secretary of the Montana System of Higher Education, told the crowd, “It is more than a building, more than just brick and stone.

“It is evidence of the vision and effort of all those who have pioneered for the fine arts in Montana, as well as those who have felt the special beauty and spiritual lift that music contributes.” 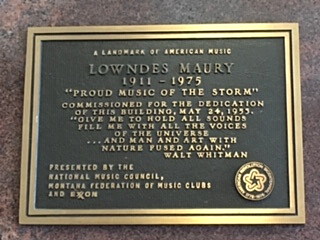 That evening, inside and away from the rainstorm, Lowndes Maury’s cantata entitled “Proud Music of the Storm” was performed by a 150-voice choir and the University Symphony Orchestra under the direction of Eugene Andrie.

The performance was recorded for a nation-wide broadcast the following Saturday, May 30, 1953, on the Columbia Broadcasting System.

The University of Montana awarded Maury an honorary doctorate in 1973, two years before his death.

But wait. Lost in all the publicity about Lowndes Maury was the “other man.”

Remember what Music Professor A. H. Weisberg said? Maury was one of only two students he had advised to make music their life’s work.

The other was Herbert Reynolds Inch, who had also been commissioned “to do a choral setting, from the Psalms, for the dedication of the New Music Building,” and was a student remembered fondly by Weisberg.

Born on November 25, 1904, “Herbert was a Missoula boy whose father occupied an executive position in the local office of the Montana Power Company, from which he advanced to a higher position with the company and its eastern Maine office,” wrote Weisberg.

“Herbert enrolled in my Harmony class (and) it became evident he had the gift of a very fine ear – that is, ‘absolute pitch,’ which is all important to everyone who aspires to a high place and music.

“His father asked me the categorical question: Do you consider Herbert talented enough to justify making music his life’s work? I answered in the affirmative.”

After his studies at MSU, Inch went on to earn a master’s degree from the Eastman School of Music in Rochester, New York.

Over the years, he won “the Prix de Rome and other national awards.”

Professor Weisberg recalled, “The overture contained in part a very clever and effective arrangement of the ‘Montana my Montana’ song.”