It’s become a daily routine – checking the COVID-19 map, showing the number of cases in each Montana county. Gallatin continues to have the most cases, while many counties have none.

A century ago, Butte was the hot spot for the Spanish flu pandemic, but neighboring Anaconda and other areas had no cases.

Now keep in mind, in both instances – today and 100 years ago – we’re talking about the days and weeks before the “peak” is/was reached. Numbers dramatically changed on November 11, 1918, when World War I ended and people abandoned all medical advice, streaming into the streets celebrating – and spreading the disease.

But before that happened, in late October and early November 1918, there was much conjecture (as there is today) about why the infection rates varied so much between one area and another.

One news dispatch out of Anaconda carried by papers around the state claimed “arsenic and sulfur fumes kill the influenza germs!”

The November 8, 1918 headline read: “Not a Single Case of the Disease Is Reported in Smelter Town.” 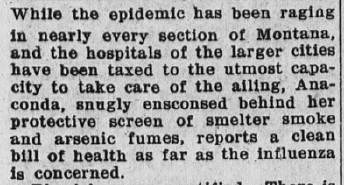 The story continued, “a remedy has been found to check the flu bug. Anaconda is a city of 16,000 souls. While the epidemic has been raging in nearly every section of Montana, and the hospitals of the larger cities have been taxed to the utmost capacity to take care of the ailing, Anaconda, snugly ensconced behind her protective screen of smelter smoke and arsenic fumes, reports a clean bill of health as far as the influenza is concerned.

“One theory is that the slight amount of arsenic which escapes the separation process of the biggest smelter stack in the world and gives the Anaconda air piquancy and Anaconda maidens the rosiest cheeks in the world, and makes the hearts of young Anacondans beat stronger on the approach of those berosed maidens, also puts an aerial barrage between the bad flu bug and its possible victims.

“The flu bug breathes the arsenic-impregnated air, which goes direct to its bad little flu bug heart and checks the normal functions of that minute organ. The flu bug goes into a quick decline and is dead before it can fly from the Anaconda-Butte boulevard to the paved streets of the Smelter City, and that is all there is to it.”

Ah, the good old days of Anaconda’s manipulation of the press! 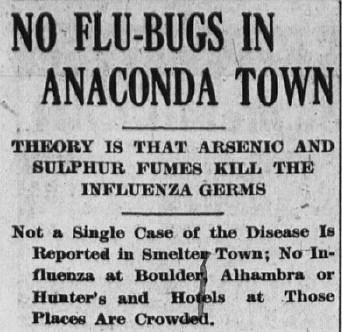 To the northwest, in Polson (at the time, part of Flathead County), city leaders claimed their quick action putting in place precautionary measures had resulted in no flu cases.

Furthermore, they said, had the flu arrived, “the precautions taken by the local board of health would have effectually put a stop to it,” opined the Flathead Courier.

Polson, according to the paper’s account, was in great shape, health-wise: “There is less sickness from colds and grippe (flu) at this time than any fall ever known here.”

Not only had health officials ordered local stores to be “fumigated,” but people “had been taking better care of themselves.”

When Polson schools were shut down to prevent the spread of the Spanish flu, “the records show(ed) that the percentage of absentees from sickness was the least it ever had been at this time of year.”

The Polson health board, as a precaution, also issued “closing orders,” affecting businesses, although the newspaper played that down: “The closing order has in no way been a detriment to but a few business places in town.”

The paper’s report ended on an optimistic note, with the opinion that “school will be kept closed another week or so.”

It didn’t work out that way.

One of the most comprehensive articles on the Spanish flu pandemic in Montana was published just two years ago in the Montana Historical Society’s Montana -The Magazine of Western History.

Missoula County had similar numbers: an infection rate of 9.4 percent and 227 deaths.

We all now wait to see what Montana’s final COVID-19 map will look like when this is all over.