This pandemic we’re in, with its societal shutdown and social isolation, has given us all a chance to reflect on what’s really important in our lives.

I miss going to the library. I miss spending hours looking at microfilmed old newspapers. I miss checking out books. E-books and audio-book downloads just aren’t the same.

A few months ago (although it seems so much longer), we were all looking forward to the opening of Missoula’s new library. Now, we wait … and reflect.

Missoula’s love affair with books goes back to the town’s early days. A local women’s reading circle was organized in 1882. A few years later, in the summer of 1890, the Weekly Gazette declared, “Missoula needs a public library!”

Given the “wealth and culture in the city,” wrote the paper, “why steps have not been taken before to provide reading rooms for the public is beyond comprehension.”

Within a few months, a number of leading citizens (both ladies and gentlemen) “met in the parlors of the Gate City club (to form) an association which would be of mutual benefit to both sexes and help strengthen the moral, intellectual and physical powers of its members.” In other words, they were proposing a combination library/gymnasium!

Their specific concern was the town’s young men, who had little option for socializing other than in local saloons. They wanted to provide “a place where our young men can come and meet each other in a pleasant way, and at the same time enjoy the refining influence of the society of good women.”

In April 1891, the Higgins brothers offered a couple of rooms in Professor Hamilton’s offices in the Higgins block for reading rooms, and Mrs. John McCormick was appointed librarian. By October, a “large number of books and standard magazines” had been acquired and “the rooms (were) comfortably arranged.” Missoula finally had its library. But it was short-lived.

Enthusiasm waned over time. The idea of a gymnasium never took root, and financial support for the library– through private subscriptions – fell off appreciably. The library rooms became widely unused; the “200 volumes of congressional records and reports and 300 volumes of history, fiction, etc.” were left to gather dust.

A truly public library, it seemed, required public funding – and that would have to wait another year or two.

The proposal “to establish and maintain a free public library in the city of Missoula” went before the voters in April 1893. It passed, though somewhat surprisingly, judging from press accounts of the day.

The Missoulian characterized the vote this way: “It is satisfaction to those who can read, who had to keep the matter quiet to keep it from being defeated.” Whether that was true or not, Missoula was set to have its first-ever publicly funded library. Or was it?

Remarkably, absolutely nothing happened – for a full year.

Finally, the Missoulian newspaper called out the city dads in a March 1894 article under the headline: “That Public Library – That Has Been So Much Heard Of and So Little Seen.”

The paper declared, “It is the duty of the council to at once appoint a board of trustees … secure a proper and convenient library room, select a librarian” and secure books and other literature.

Within a month, the city council acted, adopting Ordinance 55, establishing the library and setting an “annual tax of one half of one mill on the dollar … to support and maintain” the undertaking. 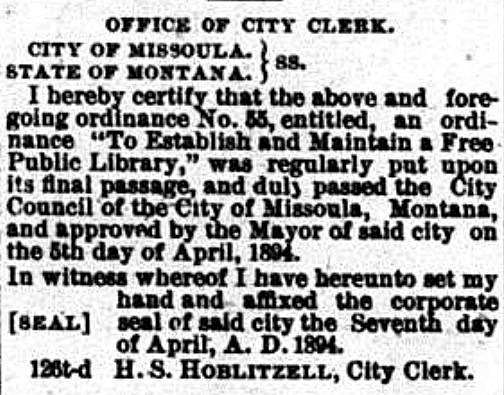 On November 19, 1894, the new, publicly funded, free library opened in the Higgins block, downtown, offering “about 1,200 volumes” of books, supplemented by periodicals and newspapers from New York, San Francisco, Philadelphia and elsewhere.

Library card holders were required to “observed the rules of the library … and reading room … and be signed by some responsible person (but) members of the same family cannot be guarantors for one another.”

By the turn of the century, with the library’s book collection approaching 5,000 volumes, it was clear the rented downtown space would soon become inadequate.

“In 1903, both the chair of the women’s club library committee and Missoula’s mayor contacted steel magnate and library benefactor Andrew Carnegie, requesting funds for a dedicated building,” according the Montana Historical Society.

Carnegie pledged $12,500 initially with another grant of $9,000 in 1911. The building, at Pattee and Pine (now housing the Missoula Art Museum), was designed by Missoula architect A. J. Gibson. A second story was added later, designed by architect Ole Bakke.

The building served its purpose well for decades, but by 1967 Librarian Evelyn Swant warned “additional space is desperately needed if the library is to continue to serve the public in its current manner.”

In 1972, Missoulians approved an $850,000 bond issue to build a new home for the library on East Main Street at the site of the old Community Hospital.

Today, that building is about to be replaced by a brand-new structure a block east, constructed at a cost of $30 million from a voter-approved bond and $6.25 million from a capital campaign.

But how soon we’ll all be able to take advantage of that wonderful new building is largely dependent on the Covid-19 pandemic and how soon we can begin the “new normal.”

Meantime, we wait and reflect on what’s important in life.