Mrs. Mabel McLaughlin gunned her eight-cylinder Oldsmobile on the flats near the Missoula fairgrounds. No lawman was going to catch her!

The chase lasted for about a mile, with McLaughlin putting up “a hard race” while her baby sat atop “eight pints of moonshine liquor in the front seat of the car and a boy about 10 years of age (sat) beside four quarts of the liquor in the back seat.”

McLaughlin herself had “a gallon jug of liquor under her dress and between her feet on the floor of the car.”

But Sheriff George A. Cole’s “big Nash car” proved the better vehicle in the chase, pulling in front of the Olds and blocking the woman’s way.

It was May 1922 – the early days of prohibition – and moonshiners and drug dealers were a busy lot in Missoula.

The same day of the high-speed chase near the fairgrounds, Missoula police assisted a federal narcotics squad in a raid on Eva White’s house on East Railroad Street where alleged moonshiner and suspected “dope ring head” Sam Mercer rented a room. The raid was sparked by the death of Army Private John P. Turpin.

Turpin, a member of Company B, 58th infantry stationed at Fort Missoula, served in France during World War I. He was described by the Missoulian newspaper as a young man of “quiet habits and genial manner … a favorite among his fellows.” He died after drinking bad moonshine believed to have been supplied by Sam Mercer. 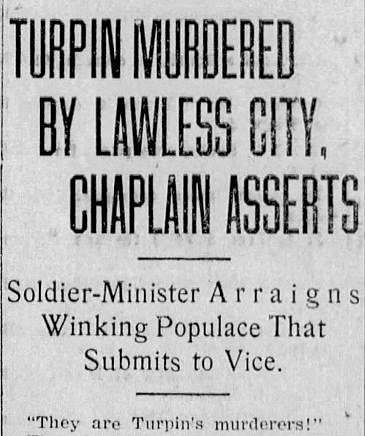 In a Sunday sermon following the death, Fort Missoula Chaplain J. R. Benjamin placed blame on everyone in the community who had failed to stamp out illegal moonshine: “They are Turpin’s murderers!”

Chaplain Benjamin said, “If Sam Mercer made and sold that fearful brew to John Turpin, he is guilty of his death and should be punished accordingly,” likewise anyone else who sells moonshine.

“But until this community as a whole rises, casts every maker and dealer from our midst and rouses a militant public spirit against anyone guilty even of indulgence in the stuff … we are all guilty to a certain extent.”

Would Missoula or Montana rise to the occasion? Sheriff Cole didn’t think so.

Following Turpin’s death, Cole said, “In another ten years this state will have to enlarge its asylums (if people don’t) stop drinking moonshine booze. The next generation, some of whose parents are now surreptitiously guzzling this filth … is sure to show the ill effects of these parents’ heedlessness.”

Cole added, “At least 75 percent of the stills that are seized are incapable of making anything but the rankest poison.”

But the criminal justice system seemed unable to deal with the problem. Even when arrests were made, convictions rarely resulted. In the cases of Eva White and Sam Mercer, both were acquitted.

White told the jurors “that the keg found in (her) bathroom” contained nothing but water. It was simply “being soaked in preparation for use as a kraut container.” In the Mercer case, the jurors cited a lack of evidence.

Mercer was also successful in a lawsuit against Sheriff Cole for injuries he claimed he suffered at the jail the night of his arrest. 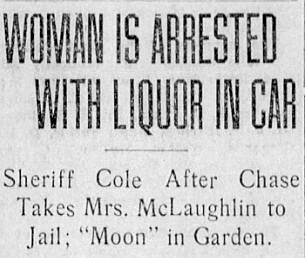 Cole’s attorney characterized Mercer as “a faker, simulating an injury in order to get money from Mr. Cole.” Mercer’s lawyer described his client as “a vigorous, red-cheeked boy a few years ago, now pale with the pallor of continued suffering.”

The jury unanimously awarded Mercer $4,850 in damages and costs.

As for Mrs. Mabel McLaughlin, she and her husband continued to make headlines throughout 1922 and 1923, with repeated arrests in Missoula and Ravalli counties for liquor violations.

After her conviction following that high-speed chase near the fairgrounds, McLaughlin, like Mercer, sued the sheriff, alleging Cole had brutalized her – claiming she was jerked from her car, then “dragged, beaten, bruised and scratched.” A search for the verdict in the case, unfortunately, has proved illusive to this writer.

Such were the early days of prohibition in Missoula – with its numerous raids, arrests and complaints of overzealous law enforcement.

Meantime, the community as a whole remained accused by Chaplain Benjamin of being as guilty as the moonshiners in the illegal liquor trade – guilty by acquiescence.

“What of those leaders of the community whose liquor parties are a matter of common knowledge?” asked Benjamin. “What of the community at large, whose lack of emphatically expressed civic righteousness has allowed the more active lawless spirits to carry on their traffic?”