The obituary was published in newspapers across Montana in July 1888.

Dan (no last name was given) died “on the range, between the Muddy and the Teton, at 8:15 a. m., while in pursuit of an antelope.” The cause of death was listed as “short windedness and too much obesity.”

His hunting companions, Sam Mitchell and Frank Higgins from Missoula, “tried in all their power to revive him, but without success.” Dan “breathed his last in Mr. Higgins’ arms.”

The deceased was well-known statewide. In fact, he had become quite a celebrity, even though he was but 4 years old.

Dan was “the last of seven trained kangaroo staghounds specially imported by the ST Ranch to exterminate wolves.” The obituary described him as “a good fast dog (whose) loss is largely mourned, as he was a general favorite.”

Perhaps I’ve led a sheltered life, but when I stumbled across this newspaper article I had never heard of a kangaroo staghound, kangaroo dog, or roo dog.

“Jane Dogs” traces the kangaroo dog back to the 1770s “when Captain Cook … arrived in Botany Bay Australia (with) a pair of greyhounds,” which the newcomers found useful in hunting kangaroos for food and in protecting their livestock.

By the 1790s, the greyhounds were cross-bred with the likes of the Scottish deerhound, resulting in a new type of dog called the “kangaroo dog.” 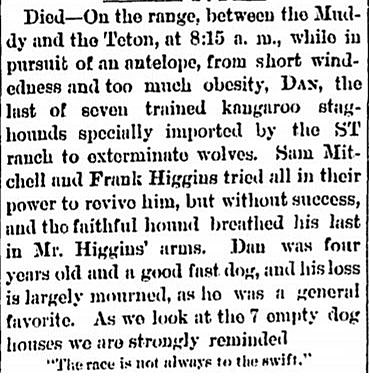 In the 1800s, Baron Nathan Mayer Rothschild, head of the English Rothschilds, counted among his many titles that of “master of staghounds.”

In Montana the staghound, or kangaroo dog, was being used by many ranchers to hunt coyotes and protect their livestock and sheep herds.

The Fort Benton River Press, in its June 28, 1893 edition, reported, “About as big a catch of coyotes as we have heard of for some time is reported from the Turner ranch at Lucille on the Marias.

“One day recently Justice Knox, of Fort Benton, was called to that point to transact some business for W. P. Turner, Sr. … when he had finished, the number punched (recorded) was found to be 171 coyote and 23 wolf skins. This, at the regular price of 25 cents each, was quite a profitable piece of work.

“Mr. Turner has a band of magnificent greyhounds and staghounds, and has been instrumental in playing havoc with the bands of wolves and coyotes which infest the Marias Range.”

In the tradition of English fox hunting, the use of staghounds or kangaroo dogs for sport became extremely popular in Montana in the early 1890s.

The Missoula Weekly Gazette, January 28, 1891, published a lengthy account of Frank and George Higgins’ weekly “hound and hare” sport hunt in the mountains outside Deer Lodge. 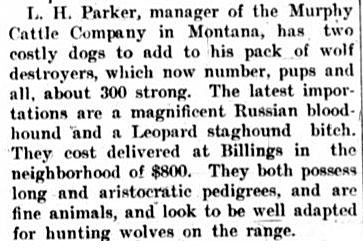 “A very few minutes ride brought the huntsman to the chasing grounds where the festive jack rabbit is known to be in abundant numbers,” but the first two “chases” ended with the hounds encountering too many prickly pears to continue.

After a rest, Captain Reynolds’ dog “Blue” and Frank Conley’s dog “Nelly” spotted a jack which took “an easterly direction for about 100 yards, when he was turned and Rex of the Missoula pack took up the jack and kept up the pace for about a quarter of a mile closely followed by Nip, Sandy and Spring.

“Sandy gradually turned the jack downhill (where) Rex and Nip took up the pace and from that time on, ran close to the heels of the rabbit.

“After a hot run up about three quarters of a mile with various turns by several dogs Nip, a well built muscular staghound with a meek expression, made a great spurt and caught the rabbit.”

Following the hunt, the Missoula sportsmen “were treated to a fine repast by the Deer Lodge gentlemen (who announced future plans for) “getting up at grand meeting when 30 or 40 dogs from Butte, Anaconda and Granite will be on hand to compete.”

The Weekly Gazette declared, “Any one of the four dogs taken from Missoula will make a credible showing in such a contest.”

Staghound hunting continued into the 20th century. The Missoulian reported in early 1905 that “William Steinbrenner and a number of friends will leave for Gaspard Deschamps’ big ranch next Sunday morning with a pack of staghounds where they will occupy themselves with the exhilarating sport of chasing coyotes, which are said to be an abundance in that section.”

As late as 1927, a Mineral Independent news account said, “So long as the country is infested with coyotes, every farmer needs two dogs, either of the Airedale or Russian Staghound breed, if he expects to bring in a fine bunch of turkeys in the fall.” 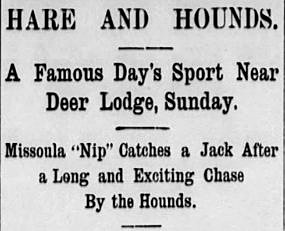 However, with the exception of “Dan,” this writer has not run across another report of a hunting dog famous enough to warrant a statewide obituary, although (with editorial tongue in cheek) the Choteau Calumet did suggest it wasn’t for lack of trying.

“Since our publication of the mortuary notice in connection with the ST kangaroo stag-hound Dan, a short time ago, there has been a curious suicidal purpose manifested by the dogs of Choteau and a mad rush to get into print.

“As a pointer, we may mention Paisley’s Turk, who became a setter to the extent of getting himself locked into a saloon all night, where his Peruvian bark discounted all the schooners connected with the place.

“The brave hound howled for all he was worth, hoping apparently to receive recognition from The Calumet, so that in the canine heavenly world he might bask in the sun of obituary renown.”