Had the weather been nicer, the attendance certainly would have been much higher, but September 22, 1895 was bitterly cold – more like December.

Still, it “did not in any way lessen the enthusiasm of the celebration of colored people,” according to an account in the Anaconda Standard newspaper.

It was the 33rd anniversary of President Lincoln’s signing of the Emancipation Proclamation. Despite the cold, nearly a thousand people turned out that day in Butte.

Missoula’s 25th infantry regimental band led a large procession through the city. The crowd then boarded street cars for the ride to Columbia Gardens, where they would hear speeches and celebrate the anniversary.

Montana Governor J.E. Rickards, the keynote speaker, called the Emancipation Proclamation “the grandest document ever penned by the hand of a statesman.”

He told the crowd, “I rejoice with you, my fellow citizens, that today the freedom attained is untarnished by fear; that the racial prejudices are dying out from the hearts of men and that the future is radiant with the sunlight of better days to come.”

Rickards, like so many others, saw higher education as the path to equality. “The higher education of the masses and broader conception of their rights and privileges, a great knowledge of man and measures paves the way to the amicable adjustment of every difficulty that seems to interrupt the political contact of the races.

“With such advanced conditions,” Rickards declared, “the race problem will settle itself in the universal recognition of the rights of man.”

The Rev. Charles Cushingberry was equally, if not more, optimistic. “The negroes now boast of 30 academies, 80 colleges, 20,000 district and conference schools, 1,000 ministers who are college graduates, 200 editors, 300 lawyers, and 800 doctors.

“At the same rate of advancement,” said Cushingberry, “in the next century the negro will lead the world.”

What remarkable visions they had 125 years ago.

The Fort Missoula band (part of an all-black regiment created after the Civil War) provided the concert for the closing ceremonies; the music “pronounced excellent by all who were fortunate enough to hear it.”

Joseph White, the drum major, won the evening’s cake walk and also was named “handsomest man in the band.” 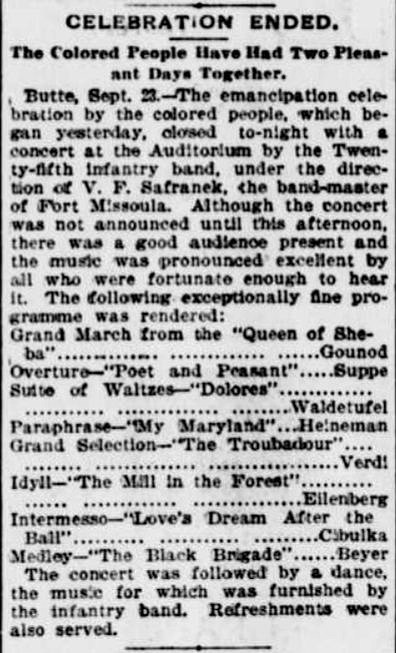 A re-creation of that performance at Columbia Gardens in 1895 will be part of the Missoula City Band’s 2020 summer concert series in Bonner Park on August 5. This Wednesday night, June 17, the season’s first offering will feature “The Missoula Big Band,” according to Gary Gillett, the band’s director and historian (author of a book detailing the history of the Missoula City Band).

The Fort Missoula Military Band of the 1890s, like the Missoula City Band of today,  was extremely popular with locals, performing weekly concerts on Thursday evenings in the summertime.

After attending one of the performances, a newspaper editor called it “the finest they have given yet. The selections were new to most of our people and were rendered with a degree of proficiency hard to excel.

“The only feature that tended as a drawback towards the evening’s entertainment, was the appearance of a couple of patent medicine quacks with patent leather cheek and a gall as large as grindstone whose aim it was to drown the music of the band with one loud, discordant yell.”

Let’s hope there are no “quacks” at the concerts in Bonner Park during the 2020 season – and thanks to Gary Gillett and the City Band for giving a nod to the historical 1895 event later this summer.