The marker at Grave 4, Lot 5, Block 054 in the Missoula Cemetery simply says, “In memory of Mae Durfee.”

The tragic story of the teenager buried there has lingered in Missoulians’ memories for well over 100 years. Unfortunately, in all the telling and retelling of the story, the truth of the 1890 event remains blurry, at best.

Mae Durfee was a stage actress, praised by the Pittsburgh Dispatch in 1889 for her role in a new comedy being performed there: “There is hardly time enough in the play to get a satisfying vision of her. The little touches of force and feeling which accentuate the maiden’s part were admirably dealt by Miss Durfee.”

The play, “A Gold Mine” by Brander Matthews, was being presented by the Nat C. Goodwin company in a coast-to-coast tour that would eventually find its way to Missoula.

The 19-year-old actress, a Covington, Kentucky native, began her stage career with James O’Neil’s “Monte Cristo” company when she was 16 or 17. It was during that time that she married a fellow actor, R. J. Shewell. He was touring with another company in New England as Durfee traveled westward across the country.

When the Goodwin group arrived in Missoula from a stop in Spokane, Miss Durfee was not well. A doctor was summoned. The Anaconda Standard newspaper reported the physician “pronounced her dangerously sick and positively forbade her appearing at the opera house in the evening.”

A few hours later, wrote the Standard, she was dead. “Thus, far distant from home and relatives, with none near whom she knew except the members of the troupe, Mae Durfee, aged only 19 years, beloved by all of her acquaintances, passed from this world to the great beyond.”

Her husband, telegraphed of the death, directed that she be embalmed and sent back to Kentucky, but the “remains were not in a condition to be shipped such a distance,” so it was decided she would be buried in Missoula.

Although officials originally told the press heart failure was the cause of death, a coroner’s inquest determined otherwise. The sole witness, Dr. Billmeyer, “testified that the deceased told him that she had been pregnant two months (and) that an operation was performed about a month ago resulting in a flow of blood for five hours.”

The Anaconda Standard reported, “At Spokane Falls, the last point at which the troupe played, (another) operation was performed by a female doctor. The jury found that the immediate cause of death was blood poisoning. It was the intention to keep the matter secret, but it leaked out.”

The press then took aim at Nat Goodwin. The Butte Miner claimed that Goodwin had “lit out for Butte without so much as a look at the dead woman,” and charged he had not left enough “money to furnish a decent burial to the unfortunate girl.”

Goodwin denied it, telling the Helena Independent, “To charge me with leaving her helpless in such a bad affair far away from home, is cruel. I ordered flowers, embalming, and paid all the bills for funeral expenses.”

“The only reason I did not attend the funeral,” continued Mr. Goodwin, “was that my troubles seemed to come thickly. We had contracts to appear at Butte and the presence of someone there was necessary to explain matters.”

The Missoula Gazette charged him with “cruelty in abandoning Miss Durfee.” Despite Goodwin’s threat to sue the paper, the Gazette persisted, writing a few weeks later, “When Nat Goodwin was here he got on an elegant jag and complained bitterly about the way he was treated in Missoula about the Mae Durfee affair. 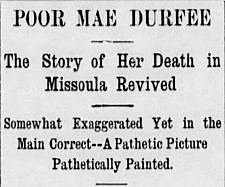 “I heard him bragging about his father having been a bunko steerer and he himself a capper for a skin faro game in Boston. Whatever the man may be intellectually, it is quite evident that he is cut bias morally.”

Versions of the Durfee story were retold for years by newspapers across the country with varying degrees of accuracy. One account said Goodwin was in Anaconda at the time of Durfee’s death. Upon receiving the telegram, he “made a slighting remark, stuck the message in his pocket and went on playing poker.”

The Gazette reprinted another story, “taken from the dramatic columns of the Philadelphia Press,” describing the “strong men of Missoula (taking) flowers and (placing) them about her body and upon her coffin.

“Indeed, there never was seen another such funeral procession since the founding of Missoula. Wind and rain and cold have assailed the wooden grave mark, but it is set firm in the earth, and the name is cut deep with a knife.” 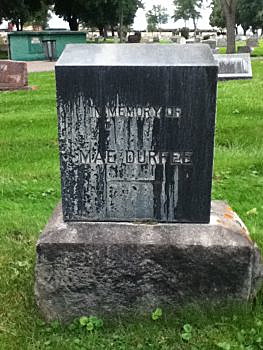 In December 1909, Missoulian columnist Arthur L. Stone revisited Durfee’s story, lamenting her “rude grave in the Potter’s field.” It struck a chord with a number of people, including “the famous George M. Cohan,” whom Stone said wrote a check to pay for a proper monument.

But more than 50 years later, another account in the Missoulian said that the money for the gravestone had actually come from Nat C. Goodwin himself, who also provided “a fund to decorate it with flowers each year on Memorial Day.”

Likely none of the accounts are completely accurate. But if we were to rely on a brief report in the Salt Lake Herald newspaper, dated May 25, 1890, just days after the Missoula appearance, perhaps Mae Durfee didn’t actually die in the Garden City after all.

It reads, “The Nat Goodwin company, which was in a railroad wreck near Butte, lost three members, including Mae Durfee, who played in the ‘Gold Mine’ in this city.”

Blood poisoning in Missoula? Railroad accident near Butte? Given no corroborating reports to back up the Salt Lake Herald’s story, it’s reasonable to believe it was just an error – and Mae Durfee is indeed buried in  Grave 4, Lot 5, Block 054 in the Missoula Cemetery.