Imagine Missoula as the largest, most powerful and most influential city in America, dwarfing New York and Washington.

Imagine its skyscrapers so tall that new technology would be required to allow elevators to reach such heights.

The Missoula Weekly Gazette envisioned such a future in a front page article on March 18, 1891.

Titled “Anno Domini 1950 – Missoula as Portrayed Sixty Years Hence,” the writer (presumably the editor of the paper) presented imagined clippings from the March 14, 1950 edition of the Gazette.

“The air ship Acolus reached Missoula today with 7,000 passengers on board. It came direct from Asia, a distance of nearly 10,000 miles, making the trip in three days, seven hours and twenty three minutes. It will lay up, poised in mid-air above Mount Jumbo for several days, returning on Monday next.”

Other airships included the balloons Inflatus and Boreas, both capable of carrying a thousand passengers.

There was also a “startling account of the approach of the sun, which is said to be moving toward this sphere at the rate of 1,000,000 miles per day.”

Perhaps that was a contributing factor to another event: “The Missoula river has widened nearly seventeen miles since yesterday’s issue of the Gazette and a powerful flashlight telescope is required to discern the opposite shore. 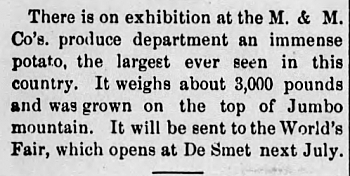 “Several prominent scientists located in the twenty-sixth story of the Aerial block, state the sudden widening is caused by the heavy overflow of the Pacific ocean while on its way to join the Atlantic.”

The writer’s foresight was considerably less boundless when estimating the future height of metropolitan buildings. Missoula’s tallest structure was envisioned to be the “First National bank block,” which added a 37th floor in the futuristic year of 1950.

Similarly strange was the juxtaposition of stories envisioning giant air transports (and even travel to other planets) with the following futuristic report on an incident at a major packing plant.

“Just as the whistles of the Girard Packing company’s establishment blew for the noon hour to give its 3,700 hands time for lunch, a team (of horses) attached to a gay cabriolet, driving in that quarter of the city, took fright probably at the sound, and made a wild dash to escape from their driver (crashing) through the main doors of the ladies’ waiting room of the depot and out the other side.” 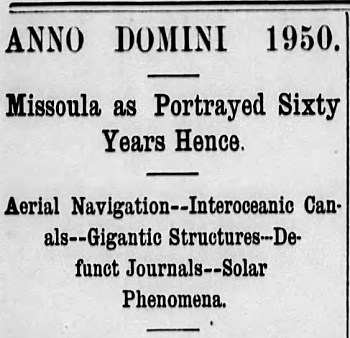 The Gazette scribbler intimated no love lost for lesser communities like Butte or Helena. Butte, in 1950, was described as a “suburban village adjoining this city, (where the smoke was) so dense as to make aerial navigation uncomfortable.”

Helena? Well, Helena was envisioned as no longer existing! “A lifeline was shot over the mountain yesterday from Helena, an extinct village said to have existed about sixty years ago.

“Police are in a quandary over the affair as it has generally supposed that the locality has been uninhabited for ages.”

The author was even less complimentary for a competing newspaper of 1891.

Workers excavating a site for future construction “unearthed a copy of a paper published presumably in the earlier ages. When brought to light, the name Morning Missoulian could be traced through the faded sheet.

On the inside, more plainly could be read, ‘Absorbed the Times March 1, 1888. Owns all the telegraphic franchises in America, secured by letters patent and barbed wire fence, and is the greatest paper on earth.’” 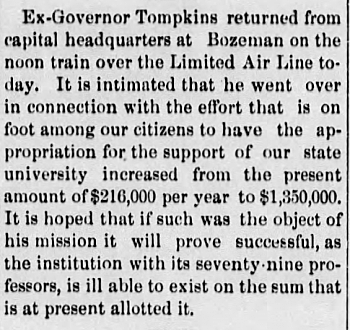 Meantime, the Gazette envisioned itself as the dominant journal of the land.

“The Gazette today accomplishes the greatest journalistic feat of the year 1950. With the aid of its 3,300 automaton compositors and twenty-seven electric presses, it issues an edition of 3,000,000 copies …”

The following day, promised the writer, “the regular 108-page Sunday edition of the Gazette will be issued.”

Also on Sunday, announced the futuristic 1950 Missoula Gazette, “The spiral elevator to Heaven leaves regularly … at 14 (sic) o’clock. Passengers destined to that point are requested to call on Rev. Skypilot for wings and harps.”