A piece of Missoula history is being torn down this summer. The removal of the Rattlesnake Dam (see Laura Lundquist’s story), will allow Rattlesnake Creek to run free for the first time in nearly 120 years. Unlike the demolition of the Missoula Mercantile, the reviews of this razing are positive.

Rattlesnake Creek provided Missoula with its “pure” drinking water for most of Missoula’s history until 1983, when giardia contamination forced boil orders and Mountain Water Company tapped into the valley’s sole-source aquifer for its supply.

Most Missoulians had never heard of the little one-celled parasite called giardia before the 1980s. Experts and the press quickly indicted the lowly beaver as the probable cause (more specifically, beaver poop) and a specific infected beaver was removed from the watershed.

Later investigations pointed to voles as the probable cause. Whatever the case – dogs, horses, humans traveling into the high country, beavers or voles – the days of using surface water for the drinking supply came to a quick end.

Back in May 1871, locals were excited to hear the news: “In a few days, Mr. H.H. Lyons will have completed the digging of the ditch which is to supply Missoula with water. The logs which are to carry the indispensable element from Rattlesnake Creek will all be bored and ready for use about the same time.”

The Missoula and Cedar Creek Pioneer newspaper concluded, “By the 1st of June, we will have an abundance of water for all purposes within convenient reach.”

But with water come rights – and fights. Before Mr. Lyons could even complete the construction, Cyrus McWhirk sued Mssrs. Higgins, McCormick and Worden over the project – specifically claiming damages for trespassing on a section of land he owned.

In 1889, with the city’s population requiring a larger water supply, Frank, John and George Higgins filed paperwork with the county clerk and recorder’s office laying claim to over 14,000 inches of water from the high lakes feeding into Rattlesnake Creek.

According to press accounts, the Higgins brothers wanted to “use this large amount of water for power purposes and also to increase the supply of water to the water works company.” Up to that point, Missoula’s drinking water supply had been limited to about 3,000 inches.

The additional supply, it was hoped, would be enough to expand the city water supply to areas south of the river. But the flume system of the 1870s and 1880s had many built-in problems, including wintertime ice and slush as well as leaves and debris carried down with spring run-off. 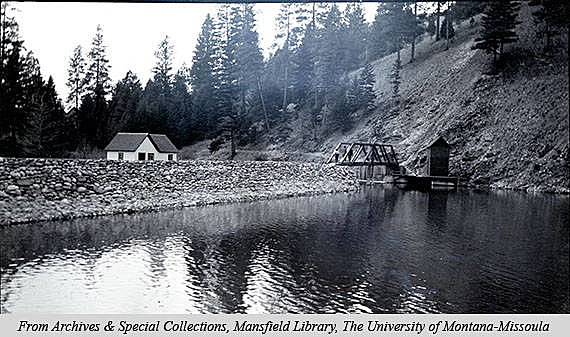 So in May 1902, construction began on a new reservoir on the northern hillside above Missoula (exactly 187 feet above downtown street level) – high enough to produce the water pressure needed to reach even the “loftiest sky-scrapers” of the future!

The Rattlesnake Dam, above the mouth of Rattlesnake Creek, was begun in August 1902 and completed five months later in mid-December.

The Missoulian reported on December 13, 1902, “The valves in the new reservoir were opened yesterday afternoon. Water flowed into the mains and thence throughout the city.” 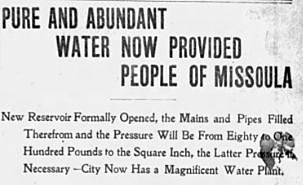 The paper described a 70-foot tunnel running downhill from the dam “which conducts the water into the main pipe by means of a solid body of concrete. The (30-inch) pipe … is composed of California redwood staves bound together with steel bands and clips.”

Photographer John E. Dunn captured a series of images of the newly constructed Rattlesnake Dam back then, showing its rock wall and spillway. His photos are now part of UM’s Archives and Special Collections at the Mansfield Library.

The new waterworks were declared “far above human habitation” to assure a long-term supply of clean water.

In fact, one written account described the water as “so chemically pure … that the laboratories at the University use it without distillation and no foreign impurities are present to affect the accuracy of their chemical tests.” 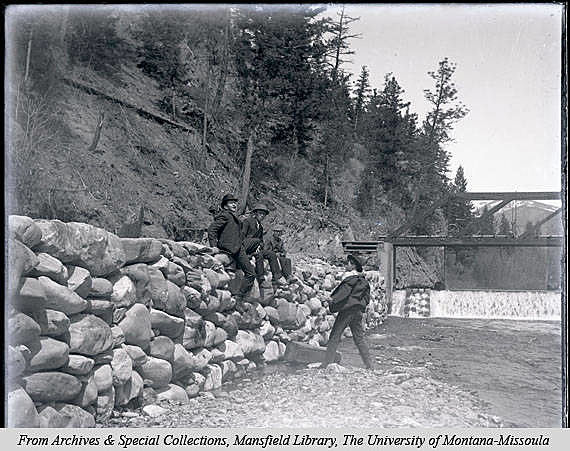 But with the giardia scare of the 1980s and a conversion to groundwater wells, the need for the 1902 Rattlesnake Dam has long since passed.

Demolition of the dam should be accomplished by late summer, followed by streambed reconstruction and revegetation. In all, the work has been estimated at roughly $2 million.