It was late, approaching midnight, on June 30, 1897. Edward C. Reitz, founder of the Garden City Commercial College, accompanied by a fellow professor, was walking through downtown Missoula, dropping in at several saloons and then passing by the Florence hotel.

It was there that “someone from the second story window dropped the contents of a bucket of slop on the head of Reitz,” according to a local newspaper account. Reitz “rushed into the bar room of the hotel,” confronting a crowd of men who “jeered him in anything but a pleasant manner.”

Someone in the crowd sprayed Reitz with seltzer water; others commandeered a fire hose, drenching the professor; then the crowd “evicted (him) bodily from the hotel.”

That was just round one. The mob followed Reitz and his companion down the sidewalk “toward the Rankin house, a block away,” throwing eggs at the pair until “Chief of Police Angevine came upon the scene and the crowd dispersed.”

The mob’s target, Professor Reitz, was at once respected and hated in Missoula.

Reitz’s name was as well known in the Garden City around the turn of the 20th century as those of Higgins, Worden, Woody or Greenough. He would come to contribute enormously to the city over a period of four decades.

Yet on that night in 1897, he was attacked by a mob angry at Reitz’s part in backing a law which prohibited gambling. The law took effect at midnight. Many in the crowd thought Reitz was spying on the saloons to make sure they were complying with the new law.

The editor of the Missoulian newspaper personally admitted he didn’t much care for Reitz (to the point of calling him “particularly offensive”), but declared “mob law does not and cannot rule in Missoula (adding, it) blackened the fair name of Missoula (and) gave it a coat of tar so to speak.” 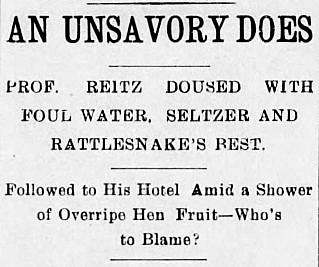 The editorial came only after the mob story had been picked up by the press in neighboring states, to Missoula’s embarrassment.

The Spokesman Review wrote, “(The) episode in Missoula will not help the good name of that town.” It described the mob as “coarse loafers (who) had a notion that a faro dealer was a more important personage than an educator, and perpetrated atrocities which would be condemned in the slums of a great city.”

The newspaper called on the city of Missoula to “proceed with vigorous determination against the members of the mob.” The city responded, but not with the result desired. The grand jury swiftly indicted only three members of the mob, and the jury, just as fleetly, found all three not guilty.

The Missoulian newspaper, for its part, defended the jury – reporting that Professor Reitz “had made himself obnoxious to many people on account of trying to suppress what he considered vice.”

In all honesty, that was probably a fair description of one aspect of the man: He could be, and was, “obnoxious” at times in pursuit of what he considered to be right. 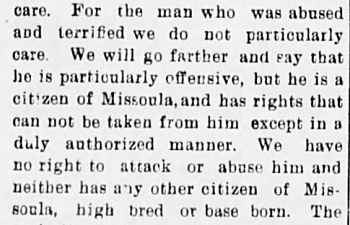 Even in subsequent decades, after achieving so much good for the community (founding an esteemed business school and raising funds to build a bridge after the 1908 floods), he couldn’t seem to help himself.

He hounded the city council about “the great number of unlicensed dogs on the South Side,” and was hauled into court on a reckless driving charge, after smashing his car into a wagon.

The final straw, for those who didn’t care much for the man, came in 1938 during the campaign for a bond issue to finance a new city hall. A group called the Municipal League was forced to disband after Reitz, a member of the group, went rogue.

Reitz distributed pamphlets, using the group’s name, “in an effort to confuse and mislead voters,” charged the league, and its membership wanted to disassociate itself from him.

They claimed “the author of the dodgers had a habit of injecting personalities, epithets and insinuations and belaboring all those whose opinions differed from his own.” 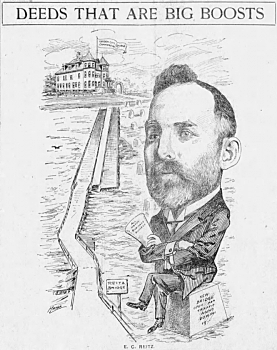 When Reitz died in 1952, at age 89, the Missoulian described him, very accurately, as a man who “swam against the current most of his life (and) was steadfast for his convictions no matter what general sentiment was.”

He was, said the editorial, “a firm advocate of reform long before the community was ready for change and suffered persecution for his efforts. But he never changed, and was a gadfly to some even when he had reached extreme old age.”

Nonetheless, he left his mark on Missoula, to be sure. You might give him a kind thought as you drive by his most visible and lasting legacy – the Garden City Commercial College building (now, the Babs Condominiums) on South Fourth Street West, just off Higgins.