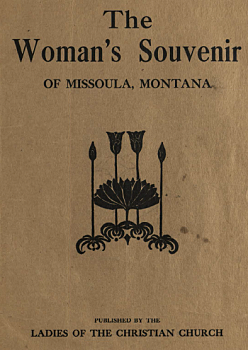 “Two motives have prompted the preparation of this little book,” said the ladies. “The first was the urgent need for funds, which is ever existent in organizations engaged in auxiliary church work,” but as the work progressed, the women “became enthusiastic in the endeavor to portray Missoula from the woman’s point of view.”

They titled their work, “The Woman’s Souvenir of Missoula, Montana,” a digital copy of which is available to all, thanks to the preservation work of U-M’s Archives & Special Collections at the Mansfield Library. It is a delightful and insightful read.

Mary Curtis Knowles described, “Life in Montana” in the 1870s, when “the roughest and most dangerous elements which had threatened the building of a more civilized social structure, had been eliminated,” by the vigilantes. To her, it was a good time, when “we were a community of young or middle-aged people (of) strong, vigorous, confident lives,” something she feared may be changing in the new century, ahead.

Belle Cash Tevis wrote of the “scenery and environment of Missoula,” a daunting task, she said “because of the strong element of the impossible, (in) an attempt to describe scenery, particularly where the large attribute is grandeur.”

Of descending from the upper Rattlesnake to Greenough park, she wrote, “The entrance to the park presents one of the most charming views in all the long list of Missoula’s beautiful views. In the park one sees the ‘forest primeval.’”

Lucina L. Worden Sterling recalled the first white settlement in the valley, and “a spot about four miles down the river below Missoula, where four desperadoes, who had figured as road agents, horse thieves and murderers, were summarily executed by avenging vigilantes and buried where they died.

“That was in 1864, in Captain C. P. Higgins’ corral, within a stone’s throw of a little, old log house, which was the first building in this valley, the first store in Montana, and, in reality, the beginning of the present City of Missoula, being the trading post at Hell’s Gate Ronde, established by Captain Higgins and my father, Frank L. Worden, when they came from Walla Walla in 1860, bringing a stock of merchandise on pack horses, which was the way traders obtained supplies previous to the opening of the Mullan Road.”

Mary E. Ross wrote of the future of Missoula, describing it as “very bright to those who have inherited it as their birthplace, and also to those who have made their homes here for a number of years and have seen what has been done, and realize to some extent what more could have been done in the way of substantial development during it’s brief history.” 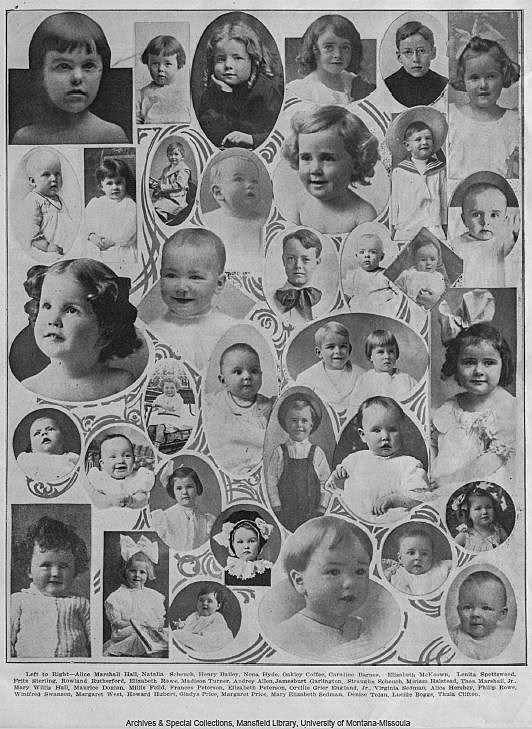 Others described the economy and commerce, magnificent homes, public buildings and hospitals, railroads, and supervised playgrounds.

One section of the book, of course, described the churches of Missoula from their inception to the date of writing,1910.

Mary E. Coffee recalled Rev. W. D. Lear of the Christian church settling in the Bitter Root valley about 1879, then traveling north to Missoula in 1885 to preach to a “little band” of followers. Soon, a Missoula church was organized, “with sixteen members.” In 1888, “the present church building, on the corner of Washington and Cedar (now, Broadway) streets was built.” 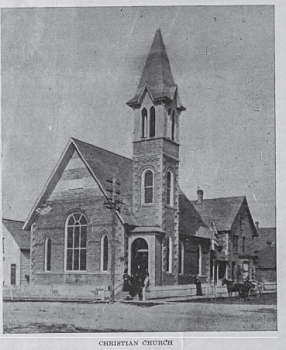 Mrs. George F. Brooks wrote of the early days of the Baptist church in Missoula and the man in charge. “This man was Rev. Donald McGregor, who, with his family, arrived in Missoula in 1882. Late that same year he organized (the) church with, perhaps, ten charter members.” In 1890, that church transformed into the Emmanuel Baptist church, boasting 204 members by 1910.

Similar growth was described in the Presbyterian church. Mrs. C. H. Grant noted as few as eight members in the early church in Deer Lodge in 1876. Between the time the Missoula church was built in 1889 and the writing of the book, church membership grew to “between 250 and 300 members.”

Helena Grace Evans and Hallie Hall wrote about Missoula’s earliest public schools, the creation of the Sacred Heart Academy and the establishment of the University of Montana. Freda Heckler described the prospering, private Garden City Commercial College (written about in this column just weeks ago).

Then, there were the social clubs.

The “As You Like It” club, formed in October, 1891 as a women’s reading club, acquired its name quite by chance. Mrs. W. F. Book recalled. “In deciding what they should read, one lady said: ‘Bring anything you like,’ when another remarked then, we will name our society the ‘As You Like It’ club, a suggestion unanimously adopted.”

The “Woman’s Club of Missoula,” was formed in the spring of 1902 at the “home of Mrs. L. J. Knapp…with a charter membership of twenty-six bright, broadminded women.”

If you have the time, click on that link near the top of the story, and give this book a read. I hope you’ll like it as much as I.