In 2020, it houses Sorella’s Spa Boutique, but if you look up to the top of the structure at 207 E. Main St. in downtown Missoula, you’ll see its original occupant: Independent Telephone Co., 1910.

Independent Telephone was far from the first phone company in Missoula. The earliest attempts at using phone equipment date to 1879 and proposals to add “telephonic communication” lines to the existing telegraph poles between Missoula and Fort Missoula so messages could be sent more efficiently from downtown.

By 1884, quite a phone exchange had developed. The Occidental Hotel had the honor of having phone number 1. If you wanted the Northern Pacific Hospital, you would ask the operator to ring number 11.

Competition for Missoula phone franchises heated up in the early 1890s, according to the Missoula Gazette. One of the town’s founding fathers, Frank Woody (with partners), obtained a franchise but found “it impossible to obtain the instruments,” so they relinquished their option “to the Rocky Mountain Telephone Co., which has a monopoly of telephones in this section.”

That domination lasted for nearly two decades, but in 1909 New York’s Telephone Securities Weekly published an article showing Rocky Mountain Bell with “a deficit of $104,997” in the previous year, and pointed to remarkable gains by its competitor, Montana Independent Telephone.

In April of 1909, the Butte-based Independent Telephone purchased a building lot  (26 feet wide and 130 feet deep) from John M. Keith on the “south side of East Main Street, west of the adjoining Harnois Theater” in downtown Missoula.

After a year of construction, invitations were sent out for the grand opening of the company’s new $250,000 automatic telephone exchange in Missoula on July 30, 1910. “Your attendance … is most urgently requested … from Two to Eleven o’clock P. M.,” read the invitation.

In hyperbole matched only by that of a carnival barker, Independent President Thaddeus S. Lane proclaimed that he expected a crowd of no less than 10,000 persons to attend the ceremony!

There was to be “a generous supply of delectable refreshments.” Souvenir gifts were prepared – watch fobs for gentlemen; hat pins for the ladies. A special train was assembled to carry President Lane and a hundred or more dignitaries and guests from Butte to Missoula, for the affair.

On arrival in Missoula, “Fat Jack” led the parade, costumed as a monkey “clad in a spike-tail coat and stovepipe hat and manacled with leather handcuffs and waist strap,” according to the Missoulian newspaper. “He cut quite a figure on the way from the station to the Florence hotel, where the delegates had their headquarters.” 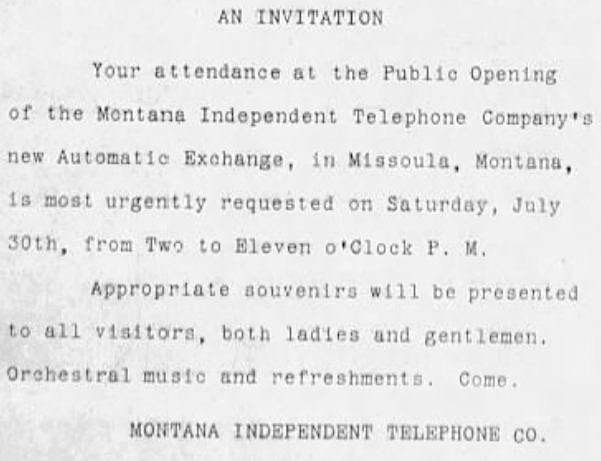 On his back was a sign proclaiming, “He’s wild; just captured. He tried to make love to a girl-less telephone operator.” Fat Jack was the nickname of John C. Jones, an 1860s Montana pioneer who spent time in Fort Benton, Deer Lodge and Cedar Creek west of Missoula.

The official celebration at 207 E. Main got underway with remarks by toastmaster John Tolan of Butte. The new phone system, he said, was truly automatic – no operators required. “Just point your finger at it and it talks,” said Tolan. “Its tones are so strong and clear that you may hear (Butte) Mayor Nevin appoint a new police chief.”

Nevin, for his part, told the crowd that Missoulians should enthusiastically support the new phone company, not only for its investment in the Garden City, but because “it is a home industry and we should be proud of it.”

Company employees staffed the second floor of the building “to explain the workings of the ‘girl-less’ system of telephony” – or at least try to explain it to guests. 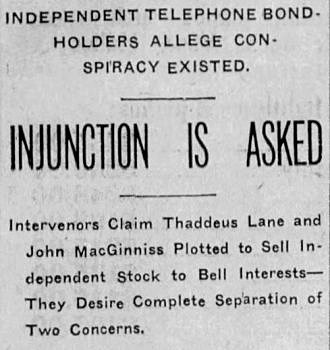 Many guests found themselves scratching their heads in confusion over the thousands of electrical circuits and magnetic connections triggered each time subscribers picked up their phones at home or work.

In the weeks and months to follow, additional exchanges were set up in the Bitter Root and elsewhere, as the company expanded. But competition was fierce and the enterprise didn’t last very long.

By 1915, Independent Telephone bondholders filed suit alleging company President Thaddeus S. Lane had conspired to sell the company to a rival, Mountain States Telephone, without their knowledge. Soon, the company folded and Lane moved to Spokane.

In 1917, the building at 207 E. Main became the home of the Missoula Chamber of Commerce. Later was used as an office for the State Department of Agriculture, the AAA Auto group, and others.

It was added to the National Register of Historic Buildings in 1990.