To regular readers of this column, I openly acknowledge this is not the first time I’ve taken up the quill to jot a few thoughts about swine.

But it is a fact I cannot deny: I love pork.

Ribs, chops, bacon, sausage, ham – set the table, and bring it on! Why, that might even be considered somewhat poetic.

Also, to the many who caution me on my dietary choices, pointing to medical studies of one kind or another, I point to history!

It would be downright un-Montanan of me to give up pork. Hogs have been part of Montana before Montana was – Montana.

“The first hogs were brought to Montana by the Catholic priests early in 1855,” according to the Butte Daily Miner.

“Hogs, in those early days,” reported the Miner, “subsisted through spring, summer and fall upon camas roots, which grow in great quantities in the Bitter Root and Joco valleys.”

Despite my stated position on oinkers, I will admit that there were problems, historically. Hogs and Montanans didn’t always get along, resulting in passage of the first “Hog Law,” (House Bill 10) on December 21, 1871. 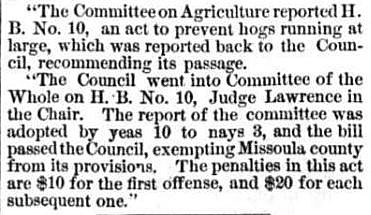 The law, including an interesting Missoula exemption, seems to have been largely ignored.

The Helena Weekly Herald pontificated on June 5, 1873: “We would like to see some citizen immortalize himself by enforcing the hog law. The city is overrun with numberless swine the owners of which refuse, unless forced to do so, to abate the intolerable nuisance!”

The Livingston Daily Enterprise declared: “Without desiring to seem captious or exacting we respectfully submit that Livingston is too much of a town to be converted into a hog pasture. They are especially proving themselves (a nuisance) in the residence portion of the town, where preparations are being made to do some gardening during the spring and summer.”

But in Missoula County (which until 1893 included what is now Ravalli County), hog raising was big business – and hog laws were continuously fought at all levels of government, local to territorial or state. 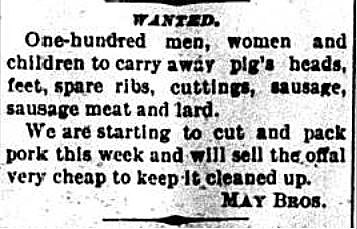 The May brothers, George and Albert, operated a substantial hog business at the site of old Fort Owen, in Stevensville. They shipped hogs by the wagon load, and later by the car load on the Northern Pacific Railway.

And there were characters like “Old Billy” Sipple, described in one newspaper article as “engaged in the delightful occupation of butchering hogs in the Bitter Root valley.”

The Legislature tried repeatedly to address the “hog wild” problem in Missoula County. In 1878, it enacted “a law making it a misdemeanor, punishable by a fine of $10, to allow any hog to run at large in a town of over ten inhabitants. Besides this penalty the hog so found at large may be seized and sold, the proceeds being paid into the school fund of the county.”

Urban Missoulians applauded the action, but the new ordinance wasn’t much enforced. The Missoulian noted a year after the law passed, “There are hogs running at large in town, contrary to the statute,” and pointed out the “swinish creatures ought to know that they are guilty of a misdemeanor and that their lives are forfeited and their hams dedicated to the smoke-house by law.”

The fight over hog laws continued well into the 1880s. It was only when the community of Missoula finally incorporated – officially becoming a town – that it passed Ordinance 58, outlawing “animals willfully permitted to run at large within the city limits,” including hogs.

Now, it wasn’t that Missoulians didn’t appreciate hogs; they just didn’t want them on their doorsteps or in their gardens.

The Daily Meats operation continues to this day at a plant near Mullan Road and Reserve, although now owned by Midwestern firms, Seaboard Foods and Triumph Foods.

On the right day, with the right wind direction, the sweet bouquet can be wonderful as one sits in traffic at that intersection.