It’s a quote attributed to General William Tecumseh Sherman in 1871, after hearing rumors he might run for the presidency.

More accurately, his words were: “I hereby state, and mean all that I say, that I never have been and never will be a candidate for president; that if nominated by either party, I should peremptorily decline; and even if unanimously elected, I should decline to serve.”

Something similar happened in Missoula in April 1884.

The Garden City’s first elected mayor, Frank Woody, was just finishing his term in office and a new election had been scheduled.

Everything happened in a flash – nomination of candidates, campaigning and election – all within five days.

On a Thursday night, “some fifteen or twenty citizens met in Woody and Marshall’s office and nominated what was known as the ‘People’s Ticket,’ ” including Woody for a second term.

The next night, at Kennedy’s Hall, another group – dissatisfied with the secrecy of the Thursday meeting –  nominated what they termed the “Citizens Ticket.”

On Saturday, “the action of this (Friday) convention being unsatisfactory to some … a third ticket was placed in the field called the ‘Straight Ticket.’”

The election was held the following Monday, “the result being the election of the entire ‘Citizens Ticket,’ except for the candidate for police justice.”

Ferdinand Kennett (no photo to be found), the president of the Western Montana National Bank, chairman of the Missoula County Republican Party and a delegate to the territorial convention, was elected mayor in a landslide over Judge Woody, 142-44.

The Helena Weekly Herald proclaimed, “Ferdinand Kennett is the Executive-elect of the city of Missoula. The honor was unsought, but it was conferred by a rousing majority nevertheless.”

The trouble was – just like Sherman – Kennett didn’t want the job. Period.

The Weekly Missoulian pleaded with him, “Mr. Ferd Kennett, mayor-elect declined the nomination tendered him and repeatedly declared he would not accept if elected. But he received such a testimonial of the esteem in which he is held that we trust he will reconsider his determination.

“It is the duty of good citizens to fill public positions, even if they are onerous and unpleasant.

“It is by such sacrifices that our government is kept safe and pure. We are certain Mr. Kennett can serve the office with credit to himself and satisfaction to the people, and hope to call him mayor for the next year.”

Kennett would have none of it. So, the whole process had to be repeated. 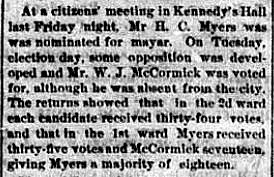 Mayor Myers presided over his first meeting of the town council on May 23, 1884.

So who was this man, Ferdinand Kennett, who was so admired by his fellow Missoulians, but refused to serve as their mayor?

Kennett was a Scotch-Irish civil war veteran from Missouri who came to Montana in 1867. He worked as a bookkeeper for the St. Louis and Montana mining company in Philipsburg, later taking banking jobs in Helena, then Missoula.

He and his wife helped organize Missoula’s First Presbyterian Church in 1873 – he becoming the elder of the group.

In his later years, he developed health issues – asthma, which aggravated a heart problem – forcing him to retire early. By the spring of 1915, he was bed-ridden and died on May 2, 1915.

He was fully prepared for his death, having written detailed funeral plans years earlier. He wanted his closest friends to be his pall bearers, including Judge Frank Woody, the man he defeated in the mayoral election in 1884.