The Missoula Weekly Gazette called it, “One of the handsomest, most commodious and most elegantly furnished family hotels in the state of Montana or the Northwest.”

The Mix House – or as it more was commonly known, the European hotel – was constructed in 1890 at the corner of Spruce and Woody streets by a man described as “one of the best known citizens of Missoula and Missoula County.” Yet few today recognize his name.

Miles Mix was a lawman, a businessman, a high-degree Mason, a staunch Republican and a three-term alderman on the Missoula City Council who was elected council president in 1899.

Mix was born in Ohio somewhere around 1850 (not having a birth certificate with an exact date was far from uncommon back then). He volunteered for the Union Army in the Civil War, serving under General Custer.

After the war, in the 1870s, he worked as a deputy sheriff, a city marshal and a justice of the peace in Missouri and Colorado. He moved to Missoula in 1884.

The Missoulian reported: “His reputation for excellence as a peace officer having proceeded him, he had scarcely entered the county before he was offered and accepted the office of deputy sheriff … a position of no little responsibility and requiring much courage.”

A few years later, in 1887, he opened Missoula’s first-ever bottling works – then sold it to finance construction of his hotel, which would feature “nice steam heated rooms for $10 to $12 per month.” 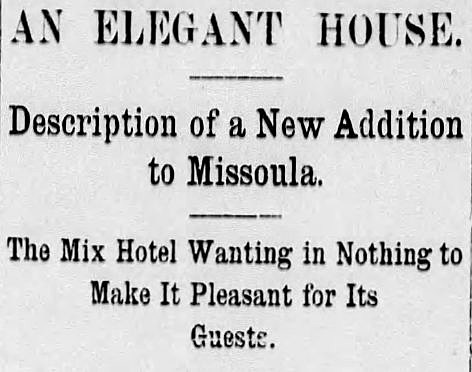 Missoula’s Weekly Gazette described it as looking “more like a gentleman’s residence than a hotel” with “an elegant eight foot porch … a large bay window on the Woody Street side (and) fine asphaltum walks on the south and west sides.

“Entering by the front way, on Spruce street, the visitor finds himself in a handsomely carpeted eight-foot hall, with hat rack, mirror, etc., in dark cherry, just as he would find in a home.”

Down the hall were elegant rooms furnished in walnut, oak and Turkish leather. A “marble wash stand … with hot and cold water faucets” was available for guests.

Upstairs were more guest rooms, wash rooms, and a large family space for the Mix family. “There are fifty-three rooms altogether in the house, and the whole house is heated with hot water pipes, handsomely painted and gilted.” There was even a barber shop in the basement run by Harry Mead.

Miles and his wife were a couple, not only in marriage, but in business. She was the main proprietor of the European hotel and also ran the nearby Northern Pacific lunch counter for years until the NP canceled the agreement in 1897, placing the lunch counter under it dining car services.

Mrs. Mix was also enthusiastically “in the mix” in Missoula’s social scene. She was a longtime member of the Garden City Cycle Club and, according to her husband, “the most enthusiastic (bicycle) rider in town and stands ready to prove it.”

When they were packing to return to Missoula from a trip back East, she told Miles, “Leave out anything you want to but don’t forget to put in my bicycle suit.”

At the 1897 gala New Year’s masked ball, she “created no end of amusement” by wearing her mask “on the back of her head,” delighting the crowd “walking backwards and forwards seemingly advancing either way,” according to one press account.

Mrs. Mix was a proud Irish girl, a native of Monaghan County, Ireland.

Miles – a native of Ohio – was said to be equally proud of his English background, and was one of a handful of Missoulians who noted Queen Victoria’s birthday in May.

But in 1897, on that particular day, he was reprimanded by one of his hotel guests, who happened to be an Englishman. Miles had just come in gardening with his hands as “green as the Irish flag!”

Turns out he’d been dying burned-out light bulbs to use as garden decorations, and admitted to his guest that yes, by the color of his dyed hands, “he must be a poor Englishman.”

While Mrs. Mix would be bicycling, Miles would be hiking or fishing. In 1891, Mix and three fishing buddies recorded a combined catch of 32 trout in three hours at Fish Creek. In the evenings, Mix would debate politics and the bi-metal issue with guests at the European hotel.

But there was also much sorrow in the family.

Both husband and wife, although relatively young, were not in good health. Mrs. Mix – while described as a “rugged woman,” suffered greatly from stomach and heart problems for years. She died in 1897 at the age of 41. 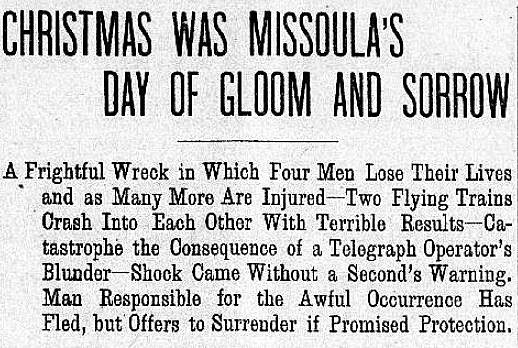 Two years later, one of the couple’s two sons, Wallace Mix, a brakeman on the Northern Pacific line, was seriously injured in a “head-end collision” of two freight trains a few miles east of Bearmouth. Wallace was standing “on top of the tender … was thrown over his own engine and almost the entire length of the other … (then) badly burned by steam.”

Miles, who had been in ill health for much of the 1890s, rapidly declined after the death of his wife. He ultimately died of Bright’s disease in November 1900, at the approximate age of 50.

The European hotel, at 222 Spruce Street, continued to operate but by 1910 had declined to the point that 63 people petitioned the city council to revoke its saloon license, calling the place “a menace to public welfare.”

Then, in the early morning hours of March 14, 1912, a fire broke out in the basement of the hotel, spreading quickly, causing guests in their night clothes to scramble “from the building through every exit.”

No one was hurt, but the building was a total loss – well, except for a vine, covering the outside walls. F.S. Lusk, a neighbor, dug it up and transplanted to his property, hoping to save at least a little history.