There was a steady, heavy rain in Butte the morning of September 7, 1891. “At 8 o’clock representatives of the different labor assemblies gathered at the Miners’ Union” for the planned march to the Montana Union train station.

But the parade “was not the imposing affair that had been anticipated,” with many of the participants opting to use “the shelter of street cars and carriages,” rather than marching in the rain.

At Union Depot, “two trains of about 18 coaches were waiting to carry the excursionists” to the first-ever celebration of Labor Day in Montana, in Deer Lodge – “one of the events in the history of the state,” according to the Anaconda Standard newspaper.

The Montana legislative assembly had approved a bill on March 4, 1891, creating the legal holiday in the state for the first Monday in September each year.

The train cars were “crowded almost to their capacity with men, women and children, and a number more were picked up at stations along the road.” A separate train brought a hundred or more people from Helena. 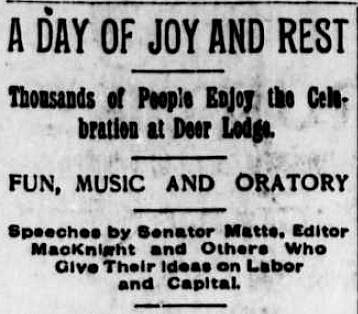 At 2 o’clock, under slightly improved skies, Montana Senator Elmer D. Matts of Missoula, the “father of the Labor Day bill,” told the Deer Lodge crowd, “The time is coming when class legislation shall be a thing of the past.”

But that time hadn’t yet arrived.

At that moment – the fall of 1891 – Matts said, “We have been witnessing the growth of two classes, one growing richer and the other poorer. There is no natural law and there should be no artificial law to allow this.

“The cause of labor is a noble one. It has been trod upon too often!”

The state senator from Missoula called for “mental improvement and the education of the masses as a means of defense against the encroachments of capital.”

But as bad as the relationship of labor and capital may have been in the fall of 1891, it was only to get worse in the coming decades.

Standard Oil bought up nearly every mine in the area, crushing its last real competitor, F. Augustus Heinze in 1903, who warned miners, “If they crush me today, they will crush you tomorrow.”

Workers wages stagnated for over 30 years. In 1914, the Miners Union parade turned into a riot, with members ransacking their own union hall and throwing Butte’s acting mayor out a second story window when he pleaded for calm.

Standard Oil made a move on Missoula as well. Andrew Hammond, who’d made a fortune in the timber market (much of the resource taken illegally from public lands) sold his lumber operation to “The Company” (Anaconda Copper).

Lumber workers, like miners, found themselves working in a dangerous enterprise for low wages. 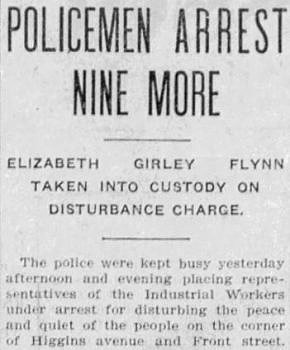 Elizabeth Gurley Flynn (Mrs. J.A. Jones) came to Missoula with her husband in October 1909 as an organizer for the International Workers of the Word (I.W.W., known as the Wobblies) and was promptly arrested “for disturbing the peace and quiet of the people on the corner of Higgins Avenue and Front Street.”

The arrest was ordered by Mayor Logan, who according to a Missoulian newspaper account, “is determined to put an end to the local I.W.W. demonstrations.”

Gurley Flynn, writing from jail, rallied Wobblies from Spokane, Portland and Seattle to come to Missoula and fill the jail, which she described as “a filthy, dirty hole under the firehouse stable, where all the filthy excrement of the place pours down upon the prisoners.”

Two days later, on advice from City Attorney Frank Woody Jr., the charges were dismissed. And a few days after that, there was a shake-up in the police department, with a number of officers assigned to different duties.

Labor’s history in Montana is long and bloody: the “Great Shutdown” of 1903; the “Granite Mountain Mining Disaster” of 1917; the abduction and hanging of labor organizer Frank Little; strikes, scabs and federal troops.

But on that first official Labor Day in 1891, there was optimism – and with speeches concluded, there were athletic events of all sorts, including a fat man’s race “of fifty yards, for a silver cigar box … won by C.S. Parrot of Butte.”

The reporter for the Anaconda Standard newspaper found “the most interesting contest was the women’s foot race…won by Miss Studebaker of Butte.” He noted, “The fat ladies’ race was declared off as no contestants could be secured.”

The day’s event concluded with the pavilion being cleared “for dancing, which continued…until a late hour at night.”

Labor Day 2020 for most Montanans marks a three-day weekend at the lake, the end of the tourist season, a big sale at a boxstore – but likely won’t generate much thought about the reason for the holiday.

You could pick up a copy of Mike Malone’s book, “The Battle for Butte: Mining and Politics on the Western Frontier.” It’s an excellent shade-tree read on the last holiday of the summer season.