Arthur L. Stone, the famed newspaperman who became the first dean of UM’s School of Journalism, wrote the obituary of “Uncle Charlie” Harnois in 1941. He admitted “to the newer generation of Missoulians the name means nothing.”

But to those who were around in the 1890s – well, that was another matter.

There were two indelible recollections for Stone: “a slight figure, standing on the platform of a two-wheeled newspaper delivery go-devil, drawn by a bony cayuse at high speed peddling his papers in high endeavor to beat his rival,” and that “same slight figure” in the footlights of a marvelous new theater bearing his name, “thanking the crowd for its presence and friendship.”

It’s that second image we’ll recall today – that of Charles A. “Uncle Charlie” Harnois and his three sons, Oliver, Tom and Marshall, and the impact they had on a small western Montana town, yearning for culture and entertainment.

From the 1880s through the first decade of the 20th century, Missoulians filled the opera houses – the granddaddy of them all being the 984-seat Harnois theater built in the 200 block of East Main. At its opening night in 1909, it was sold out for the production of “Brewster’s Millions.”

But we’re getting ahead of ourselves.

The earliest entertainers passing through Missoula had to use the courthouse as their stage before regional promoter John Maguire converted an old livery barn next to the Missoula firehouse at Main and Stephens into an opera house of sorts.

The stories were legend of the perfumed performances on a warm summer night. There was even a tale of a man, playing the part of ghost, quitting after one performance because his disappearance from the stage required falling through a trap door. It wasn’t the fall itself that precipitated his departure; it was the landing spot – a pile of seasoned livery manure.

By the 1890s, Missoula had a number of fine opera houses: the Bennett at 109 East Front, the Union at 208 East Main, the Gem located where today’s Florence building “pigeon parking” is found, the Mascot at 115 West Front, and the Bijou at 110 West Main.

Charles Harnois was a relative late-comer to the Missoula entertainment scene. He was a Missouri boy who headed west to the Montana gold fields in 1875, working on riverboats, running a restaurant, and eventually becoming a news agent for the Northern Pacific, selling papers “on the run between Bismarck and Spokane.”

When N.P. built the Bitter Root branch, Harnois became the news agent in the Garden City, hawking both the Missoulian and the Gazette, then “heated rivals,” according to A.L. Stone. He then took on the outdoor advertising business in Helena, Butte and Anaconda in association with local opera houses.

That led him to Missoula where he “fell heir to the management of the old Bennett opera house and later acquired the old Union theater.” Both had seen better days. The Bennett, for example, had been converted into a gym for the local athletic association. Many other opera houses in the city had turned exclusively to vaudeville or closed.

It was Harnois’ vision to bring back the days of the grand opera house, attracting major acts and major audiences – and in 1908, he received the backing of the chamber of commerce. 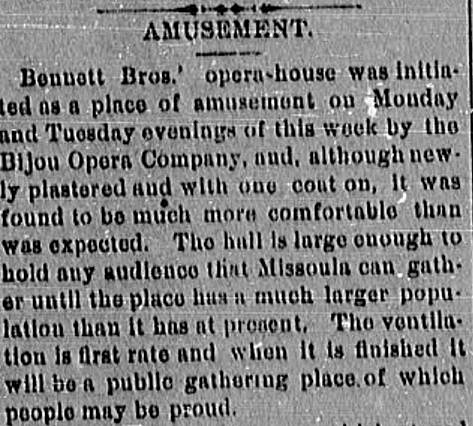 At a mass meeting held at the Union theater on Thursday night, April 17, 1908, the chamber membership backed two major projects of “vital importance to the community.” The first was petitioning the city to immediately pave Higgins Avenue. The second was to assist Charles Harnois in raising money to build a new theater.

The opera house committee wasted no time. They met the next morning, setting plans to sell 300 tickets, at $10 each, to add $3,000 to Harnois’ own fundraising which had collected around $5,000. The added boost would give Harnois the ability to borrow the rest of the capital needed.

Construction began in 1908 but took longer than many expected, lingering into early 1909. But the delays were worth it. Newspaper reporters marveled at the craftsmanship, predicting the Harnois theater to be “one of the handsomest playhouses to be found anywhere in the country,” adding that the work required “such nicety of calculation that it would have been fatal to the future of the house to hurry the work.”

State legislators were brought in from Helena in late February 1909 for a sneak preview of the opera house, prior to its formal opening. “The beautiful decorations on the walls, ceiling and the scenery (were) especially admired.”

The grand opening was set for Sunday night, April 4, 1909. “There were ‘Ohs’ and ‘Ahs’ of delighted admiration,” wrote the Missoulian, “as the men and women of the Garden City took their seats.”

Missoula Mayor John M. Keith recalled the days of the city’s first theater, “a livery barn converted to Thespian uses and situated where is now the city hall.”

Judge John M. Evans welcomed the crowd and explained the chamber of commerce’s hand in making the new theater a reality.

Harnois, recalling his promise to the chamber of commerce, told the audience, “Tonight, I think, I have accomplished that object; tonight, I present to you as good a theater as there is between St. Paul and the coast!”

It was a marvelous night. It was a marvelous theater. But the writing was on the wall. Motion pictures would soon gain such favor with the public that the opera house would not survive. New management was put in place. By 1912, Uncle Charlie was out of a job.

In 1921, the Wilma opened; two decades later, the Fox Theater was built – both offering excellent venues for Hollywood film productions. The Harnois tried to follow the trend, reinventing itself as the Liberty movie theater. Later it was transformed into a bowling center.

In the end, the building which was once the pride of Missoula reverted to chamber of commerce ownership and was demolished in 1968 to create more parking space.

Perhaps today, as we drive by 211 East Main in downtown Missoula, it might be nice if we were to give a little nod to Uncle Charlie Harnois and envision that “slight figure in the footlights of a marvelous new theater bearing his name.”