Teaching is a challenging career choice, not only in the era of COVID 19, but historically.

I suspect, however, that few teachers have ever faced an angry mob as did Mr. William W. Ulin, a music teacher in Spring Hill, Montana, in February 1886.

Under the headline “An Outrageous Proceeding,” the Bozeman Weekly Chronicle reported that Deputy District Attorney Campbell “was awakened from his slumber by an individual who bore the appearance of having just passed through a threshing machine.

“His head and face were covered with blood, his clothes torn and muddy, his entire make-up the sorriest the now thoroughly awakened attorney had ever gazed upon.”

William Ulin told Campbell he had been conducting a class in “the rudiments of vocal music” at the East Gallatin Grange Hall, “about fifteen miles from Bozeman, when the door was suddenly thrown open and a band of masked men, armed with shot guns, revolvers and knives entered.”

He was then taken outside, dragged to a cabin at a nearby ranch, and had a rope tied around his neck. In a scuffle, he managed to escape, but not before unmasking and identifying one of the attackers.

In the Deer Lodge New North-West newspaper, it was labeled a “Mysterious KuKluxing.”

In another version of the story, the Livingston Enterprise reported it may have been a case of revenge. It seems a young man who had been convicted of assaulting Ulin in an earlier confrontation and was upset at the large fine imposed by a judge “succeeded in gathering together 15 to 20 kindred spirits, disguised with masks,” and set out to give Ulin a “payback.” 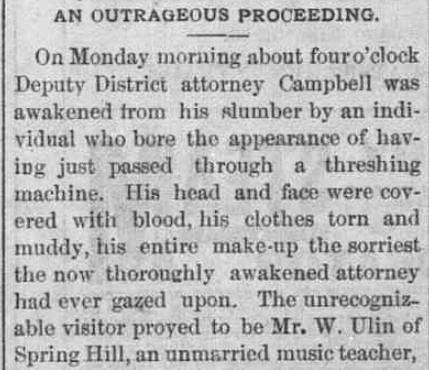 In this version, Ulin – after being beaten by the mob – headed back toward town when he came across a man who “had witnessed the entire masking performance in the early evening and personally knew all the parties, but had no idea of their purpose.”

Ulin, using this new information, swore out a complaint against the group of now-identified young men.

But wait – there’s yet another version of the story.

A Philadelphia newspaper, picking up the Montana story, claimed Ulin had been rescued from the beating by a friend who “appeared with a brace of revolvers (and) dispersed the murderous crowd, (finding) his friend more dead than alive.”

On top of all that, someone (presumably from the mob) burned down the Grange Hall the next night. The loss was estimated at $1,500 and the Grangers had no insurance.

Just about everybody, it seems, had a version of the story to tell – not to mention an opinion of Mr. William W. Ulin.

A Bozeman Weekly Chronicle reporter “found very few men from Ulin’s neighborhood who speak favorably of (him),” many “questioning his reputation for truth and veracity.”

But in a letter to the editor penned by someone identifying himself only as “Justice,” Ulin’s music classes were praised as “an honorable calling (whose) object (was) the elevation of mind and morals of the rising generation,” and labeled the attack as “the most cowardly and dastardly act ever perpetrated in this community.”

Within a week, a hearing was set before Judge Hartman, with the witness list numbering something over 50. 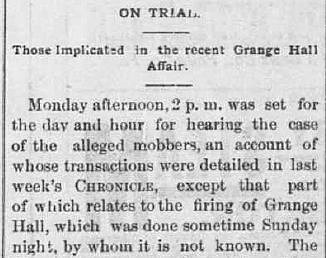 One after another, prosecution witnesses identified the various defendants as having been among the mob. Ten-year-old Nora Davis pointed out a man called Johnson. Henry Davis swore he personally unmasked one defendant, Lewis Kennedy.

Miss Sophia Aklin, reported the Bozeman Weekly Chronicle, “swore that she was warned not to go to Grange Hall that night by James Kennedy, because the boys were going to hang Ulin.”

But one after another, the defendants testified they were nowhere near the Grange Hall that night and they all produced witnesses to that effect.

Judge Hartman, having heard all sides, “delivered a stinging reprimand to both parties of the case,” ruled there was no probable cause to believe the defendants were guilty, dismissed the matter and ordered Ulin to pay court costs.” 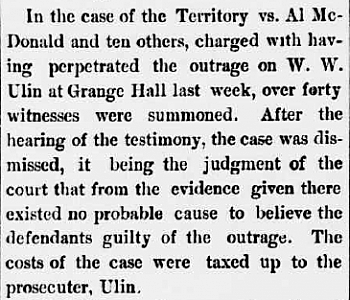 This is one of those stories which discombobulates and befuddles. There has to be more of a back-story – there just has to be. The account above leaves us with far more questions than answers.

Who was the real William Ulin? What was behind claims that his “reputation for truth and veracity was extremely bad?” Was he truly that widely despised – or, contrarily, respected? Where did his life lead after this incident?

I’ll continue searching through old newspapers, but so far – the questions remain unanswered.