There were claims of voter fraud; election results were disputed; members of the state canvassing board were threatened. The election had been stolen!

It may sound like today’s political scene, but it actually takes us back to Montana’s election of 1889 and Silver Bow County’s infamous Precinct 34.

Oh – and while we’re at it – let’s throw in a few fist fights and a central figure in the case who was accused of murder.

You just have to love Montana history – there’s nothing like it.

Congress was on the brink of granting statehood to Montana Territory, so an election was needed to select members for the new state legislature. It did not go well – particularly in Butte.

First, a fellow by the name of Henry Bernard inexplicably appeared in Butte just in time for the 1889 election.

Bernard, in the view of Democrats, was an infamous character who’d made a name for himself as a mudslinging newspaper owner and political promoter, and had come to Butte specifically to orchestrate the theft of the election. Such villainy!

As background, some years earlier in Idaho, where Bernard’s newspaper had pursued a “radical course (and) had aroused considerable” hard feelings, he had shot and killed one of his employees in an office melee. A mob tried to lynch Bernard, but failed. He spent a couple of years in prison for manslaughter. 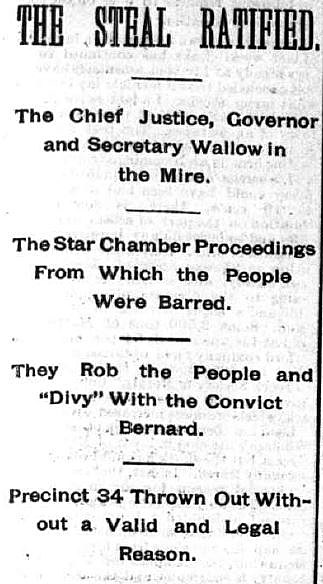 Republicans in Montana immediately came to Bernard’s defense in 1889. In a letter to the editor of the Great Falls Leader, a man signing his name as “One Who Knows” described Bernard as having the personality of “a school boy, with a modest, retiring air.”

He claimed Bernard’s “mission to Butte” was solely to provide local canvassers with “sworn evidence (exposing) one of the foulest Democratic frauds and conspiracies” to overthrow the will of the people.

The Leader labeled the Democrats as a “vile pack of boodlers, bribers, intimidators, forgers (and) perjurers!”

The various claims and counter-claims of election misconduct presented to the county and state canvassing boards included:

In the end, the Silver Bow County canvassing board refused to include the Precinct 34 votes in their final tally, declaring them “false, fraudulent and void.”

Anonymous threats of violence then surfaced – should the state canvassing board agree with Silver Bow County – hinting that board members’ heads might become lamp post ornaments!

The board chairman said he’d never been hanged, “and didn’t propose to be hanged now,” adding the group would “do its duty … without favor and without fear of consequences.”

Overall, the new state Senate was poised to have eight Republicans and eight Democrats. Similarly, the election filled the house with and equal number from each party – 25 each.

But as William L. Lang of Portland State University would later write in his book, Spoils of statehood: Montana communities in conflict, 1888-1894, “the five seats from Silver Bow were in dispute. Hoping for some resolution, Silver Bow politicians sent two House delegations to Helena, one Republican and one Democratic.”

But wrote Lang: “Both parties refused to compromise. House Republicans and Democrats met separately. Political conflict and stubbornness descended to burlesque when Democratic senators refused to attend their sessions, fearing that an organized Senate might elect Republican senators; some even fled the state when warrants were issued for their arrest.”

Ultimately, Montana’s first state legislature accomplished virtually nothing – they couldn’t even agree to pay themselves. 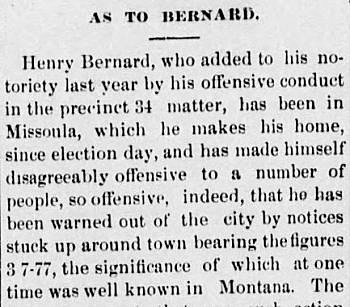 Meantime, the man alleged to be at the center of all this chaos, Henry Bernard, ended up moving to Missoula immediately after the 1889 election, only to find himself quite unwelcome there.

The Missoula Weekly Gazette reported Bernard made “himself disagreeably offensive to a number of people, so offensive, indeed, that he has been warned out of the city by notices stuck up around town bearing the figures 3-7-77, the significance of which at one time was well known in Montana.”

The Weekly Gazette added, “Whether he contemplated fraud or not against the ballot box we are unable to say,” but “the Gazette enters its protest against the 3-7-77 business, and hopes nothing will come of it.” 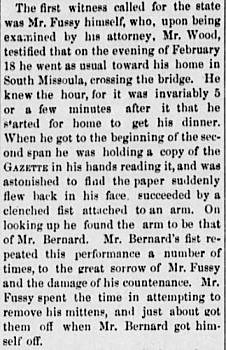 Soon enough, Bernard was again in the papers, this time for allegedly punching a local businessman, Mr. Fussy, in the face after he’d asked Bernard whether he’d had enough of politics?

The court case went on and on, to the point of the Gazette likening it to the plot of Dickens’ Bleak House in which lives and fortunes are all consumed.

Finally, after hearing alternating versions of who started the fight, the judge ruled for Mr. Fussy and fined Bernard $125. He, of course, immediately appealed.

At this point, I have to wonder if dredging up the past helps or hurts; whether understanding history helps us avoid making the same mistakes again in the future…or not?

I’ll let you decide. As for me, I’m going to make myself a drink.