This week’s story is a wonderful example of the challenges faced by anyone doing historical research – sometimes documentation is incomplete, confusing, misleading or downright wrong.

But first, a side note. One of my go-to sources has always been Emy Scherrer, Missoula’s historic preservation officer, who routinely responds with “Thank you for reaching out! I love solving these mysteries!”

But to my disappointment, Emy has just accepted a job as Bellingham, Washington’s new city planner, and wasn’t able to help this time. Last week was her final week here in Missoula.

So here’s the story as best I can piece it together – told in “process” form (as journalists tend to call it), in which the story is told through the process used to uncover the story.

Most Missoulians are aware of the building known as the Palace Apartments at Broadway and Ryman – an old hotel converted into its present use, as documented a year ago by Martin Kidston at Missoula  Current.

It is the genesis of that original building which has both intrigued and confused me.

All the “official” sources would have us believe the following:

The National Register of Historic Places, in giving the building a historic designation in the early 1980s, lists it as the Palace Hotel, constructed in 1909 at 147 West Broadway (emphasis added).

A separate National Register of Historic Places document, describing the Missoula Downtown Historic District, offers a confusing mix of names when referring to the original building (1909) and the annex (1941) just east of the original structure.

“(A) six-story annex was built on the east end of the Palace Hotel located on West Broadway diagonally from the Courthouse. While never competing stylistically with the Florence, the Savoy (147 West Broadway) as it came to be known, did take its place in conjunction with the Palace, as one of the larger downtown structures along one of the city’s main thoroughfares. The Savoy, constructed in 1909 and similar in massing to the Palace, differs in character. Unlike the Palace, the new building features bays, piers and windows that all align vertically.” (Emphasis added).

The reason for that last question is found in a wonderful photo of a horse-drawn fire wagon from the UM Archives and Special Collections, showing the Savoy Hotel in the background. The problem is, the photo is dated circa 1891.

So what’s the real history of the building at 147 West Broadway?

As it turns out, it was neither the Palace Hotel nor the Savoy Hotel when it was constructed in 1908. It was the “Lacasse Building,” financed by brothers, John T. and Alphonse Lacasse (pronounced LACK’-us), well-known Missoulians who made a fortune in mining in the Cedar Creek area.

Olson and Johnson, a firm based in Wallace, Idaho, was the contractor. That firm also built the library building at the “state university” (now UM) and numerous other Missoula structures. Eugene Morin was the architect.

The Missoulian newspaper called the $90,000, five-story structure, “one of the largest and most up-to-date buildings (in fact) the most pretentious structure in Missoula,” built with “106 tons of steel” along with brick to make the building “semi-fireproof.”

It was designed to be a combination of retail space on the ground floor, with office space on the floors above – not a hotel. The demand was there. “Though the structure is half complete,” reported the Missoulian on October 23, 1908, “numerous applications have already been received by the owners for store and office accommodations.”

But in January 1909, with the building virtually completed, everything changed.

T.S. Martin, described as “one of the most experienced hotel men of the west” signed a 10-year deal with the Lacasse brothers to lease the property at Cedar and Stevens streets (now Broadway and Ryman) with intent to convert the building into a hotel.

The ink was hardly dry on that deal when, in late February 1909, Archie Ash and Michael Ball of Spokane along with H.H. McVety of Missoula filed incorporation papers with the Missoula County clerk creating “the Savoy Hotel company” and took over the 10-year lease from Martin. 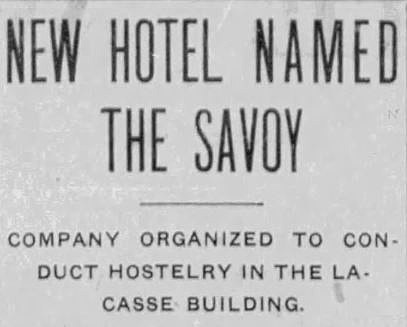 Four months later, the building had been remodeled and refitted as a first-class hotel. The grand opening of the Savoy Hotel (not Palace) was held on July 8, 1909, complete with tours and a concert by the Missoula Eagle band.

Visitors viewed the spacious lobby, the adjoining cafe, the second-floor parlor, “the luxurious halls and the handsome anti-rooms,” along with the rooms themselves, decorated with “their pretty bird’s-eye maple furniture.”

The night concluded with guests adjourning “to the Elite Hall, noted for its splendidly smooth floor, where dancing was indulged in until a late hour (to the music of) the Missoula Club orchestra.”

It seemed the Savoy Hotel partners were on the road to success. Their cafe hosted overflow luncheon crowds including regular Chamber of Commerce events. But in less than two years, the bottom fell out. The hotel was insolvent. With $30,000 in liabilities and only $20,000 in assets, it fell into receivership.

The district court ordered everything that wasn’t nailed down in the Savoy Hotel, from desks and chairs to coffee urns and bed linens, to be sold to satisfy “the lien of the Lacasse brothers.”

Enter Arthur Halle, a German immigrant who had spent nearly a decade with the Grand Pacific Hotel in Chicago, before moving to Montana where he opened the Bright Hotel in Lewistown, then leased the Grand Hotel in Billings.

In June 1911, Halle’s firm opened a new hotel in Walla Walla and also entered into a lease for the defunct Savoy in Missoula, re-christening it the Palace Hotel.

In July 1940, construction was completed on an annex on the east side of the Palace, adding 48 rooms to the original building and creating a larger space for the hotel office.

So as best I can ascertain, the true story is likely this:

The structure at 147 West Broadway in Missoula, commonly referred to as the Lacasse building, was originally built as a retail and office building in 1908; it became the Savoy hotel in 1909; it became the Palace hotel in 1911; and the archival photo from the UM Mansfield library, dated circa 1891, is in fact, more likely circa 1910.

I hope you’ve enjoyed this “process story.” To me, the research is often more fun than the story itself.

My thanks to Emy Scherrer for all her help over the years. I wish she could have joined me sleuthing this mystery, but appreciate her well wishes: “It’s been great working with you over the years, and thank you for preserving the history of Missoula! Hope you had a great Thanksgiving, Emy.”