Age and perspective are fascinating. As I head toward my mid-70s, I tend to think of anything since the 1940s/’50s as rather contemporary, not historical.

But then I’ll be abruptly reminded by some youngster displaying a quizzical look when I mention the “King,” Elvis Presley, that perhaps I should rethink my perspective.

So it is with the Lambros boys, Danny and George. They’ve been household names in Missoula for decades, although I suspect there are more than a few youngsters unfamiliar with the famous family.

For that younger generation, I recommend a quick online search for the history of Lambros Realty and the Southgate Mall.

Anyway, Dan Lambros will turn 90 next spring – April 28, 2021, to be exact, as he reminded me in a recent phone call. I wanted to pick Dan’s brain about his college days at MSU (now UM), and more specifically about his election as ASMSU president in 1952.

He and George were quite the pair of headline-hounds even back then.

In an editorial titled “The Lambros Brothers,” the Missoulian noted on May 9, 1952, that “Danny Lambros this week was elected president of the Associated Students of Montana State University. He won this honor, the highest that University students can bestow upon a fellow, in an all-school election. 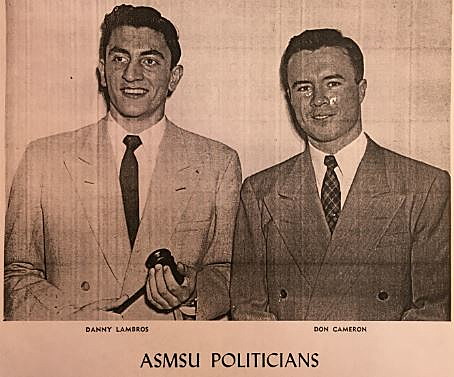 “George Lambros, brother of Danny, last week received a similar honor at the hands of the students of Missoula County High School.”

The writer admitted while the two honors may have been coincidental, they were “far from accidental,” praising the local Greek community as industrious and adaptable.

The boys were “sons of parents who were born abroad … of pure Greek blood,” adding to America’s “melting pot … developing this great nation to the destiny so plainly indicated for it.”

Dan says his proudest accomplishment as ASMSU president was pushing for student support of the construction of the new fieldhouse, specifically allowing the State University to use student fees as a “guarantee” supporting loans required for the project. 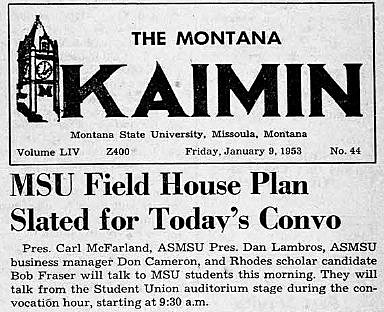 None of the student fees were actually used – but played a pivotal role in allowing the construction to proceed.

My favorite stories about Dan Lambros’ business acumen as ASMSU president were his negotiating abilities in bringing big-name entertainers to the Missoula campus.

Lambros, with ASMSU Business Manager Don Cameron of Miles City, managed to get Stan Kenton and his band (sorry, youngsters – you’ll have to look it up) to perform for a concert and dance at the university on February 24, 1953.

It was no easy task. They had to convince Kenton and his band to make the trip from Boise, where they were booked, to Missoula, then back to Pocatello, for their next commitment.

Just the previous fall, Lambros, according to a Montana Kaimin article by Bill Jones, had “bluffed his way” through a phone negotiation with representatives for the Les Brown Orchestra, saving ASMSU $500!

The band’s agent wanted $1,750 for the performance, but ASMSU’s Central Board was willing to pay no more than $1,250. Lambros made it happen.

An estimated 1,350 came to the concert by the bandleader famous for composing “Sentimental Journey” (sorry again, youngsters). 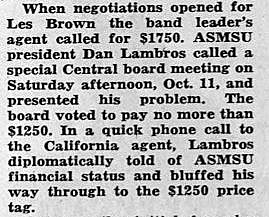 The dance that followed in the Student Union’s “Gold Room” drew over a thousand students. Kaimin staff writer Jones described it this way: They “crowded the Gold Room so full it took hula-hipped halfbacks to dance.”

There were, of course, the more pedestrian activities conducted by ASMSU and the Student Union Activities committee, including “plans to place a record player (again, youngsters – look it up) in the check room for student use during the day and evenings.”

Oh, I nearly forgot – there was a bit of college hijinks in the 1952 election, although Dan doesn’t recall the particulars. The student newspaper, the Kaimin, reported someone had called a local print shop to order 300 extra election ballots after the originals were already done.

The printer later called ASMSU asking about it, but before any student leaders could get over to the shop, an unknown person had already picked up the ballots. 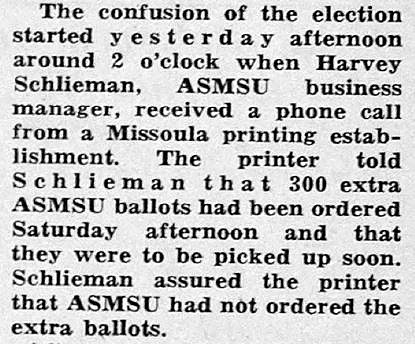 Luckily the ballots, subsequently named “shorties” since they were cut to a different size than the bona fide ones, were easy to spot as fakes. Still, 79 of them showed up when the counting took place.

Lambros won by hundreds of votes, so even if the fakes slipped through, it wouldn’t have made a difference. But the Kaimin reported there was some “confusion and cussing” for a short time.

Interestingly, a quick search of newspapers in the weeks following the election revealed no follow-up reports that the mystery ballot prankster was ever unmasked. Today, such hijinks would likely make national headlines!

This was fun. Perhaps I’ll read a few more modern newspapers for some other lost gems of the past, although I’m sticking to my guns when it comes to Elvis. No one should have to look that up!