The salesmen at Olney Motors scrambled to move the brand-new 1956 model Cadillacs from their display lot. They had to move fast – the building just west of theirs, the American Legion Hall, had caught fire and the blaze was spreading fast.

It took several trips to get all the new unlicensed cars to safety in available parking spaces a block away at Missoula City Hall.

The fire moved so quickly only the outer walls and a few partitions and floors remained after just three hours. Spectators – some estimated the crowd as large as 3,000 – jammed the sidewalks watching firefighters battling the blaze.

Cascading portions of the roof fell in, badly cutting the right hand of firefighter James Hamilton. James Slocum suffered a laceration on his head when his helmet was knocked off. He had to crawl out to safety. A third firefighter, Earl Bean, suffered smoke inhalation.

They faced other dangers, too: molten tar falling from above and leaking ammonia from the cooling system.

It was nearly impossible to put water on the source of the fire, located in a “honeycomb of false ceilings and corridors. The cause of the fire was eventually determined to be electrical, starting in a main service conduit on the east side of the building.

That was disputed by Montana Power Company officials and “five electrical workers and an electrical contractor,” but the fire chief, city manager and city building inspector, after a second inspection, stood firm on their conclusion that it was an electrical short in the main conduit. The loss was estimated at $175,000.

Reporter Stan Healy wrote the Missoulian newspaper account of the fire and took the photos that day noting, “Records of the post, along with trophies, an American flag, some liquor and a little furniture were saved.”

Healy was remarkably familiar with the building. He’d photographed it many times over the construction period just a few years earlier, in 1949.

Architect H. E. Kirkemo designed the building to be all concrete with a distinctive, eye-catching, curved brick finish on the front corner (facing the intersection of Harris (now Orange) and Main.

At the dedication on December 17, 1949, American Legion Montana Commander V.O. Overcash called it “the best Legion hall in the Pacific Northwest.” Kermit Curtis, the Hellgate Post No. 27’s building committee chairman, declared “history has been made,” and Floyd Day, the business manager, called the new building “a dream come true.”

The Hellgate Post at the time boasted membership approaching 1,000, and it seemed every one of them showed up for the dedication along with wives and children.

After the 1956 fire, post membership dropped by 50 percent as members used the local Moose Club for their meetings and considered whether to repair or abandon the downtown icon.

In May, the decision was made. The property was offered “For sale – as is” for $65,000. The Hellgate Post would build their replacement Legion hall elsewhere.

Oh, remember those Post records saved from the March 3 fire?

You’re not going to believe this, but after being stored in another downtown building, at 240 N. Higgins, they too were lost in a fire that swept through that building July 27. 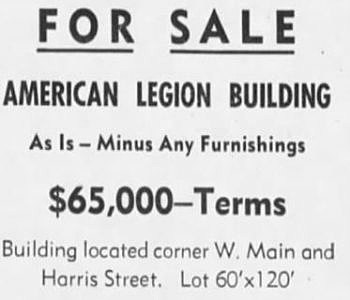 Meantime, the downtown property sold quickly. The buyer: well-known radio and television entrepreneur A.J. Mosby. He planned to use the burned-out building as a TV studio for his fledgling venture, KMSO-TV, and as a space for Farviews Realty.

Over the years, KMSO-TV was bought and sold, becoming KGVO-TV, then KECI-TV. The building though, while remodeled repeatedly inside, outwardly appears much as it did when built in 1949, with its iconic, curved brick front corner.

Inside, there are still reminders of the 1956 fire. TV engineers, crawling about in the attic spaces in the early 2000s to move some cabling discovered charred timbers left in place when Mosby rebuilt the gutted remains of the Legion hall into his TV studio.

Full disclosure: I worked in that building from the early days of its re-branding as KECI-TV until 2010, a span just short of 30 years, when I retired.

Perhaps one day I will be inspired to go down memory lane with Missoula’s early radio and TV pioneers, A.J. Mosby, Dale G. Moore and the unforgettable Vi Thomson. But that’s for another day.