As a result, my wife, for good reason, believes me certifiable. Grudgingly, I can see her point but there are extenuating circumstances.

The newspapers are, for the most part, not today’s fare – they are from the mid- to late 1880s.

Yes, there are times I may read for hours and hours, finding nothing of interest. But every now and then, a single page of a single newspaper can offer up a treasure trove.

Today’s example: Page 3 of the four-page November 10, 1870 issue of the Missoula Pioneer, the town’s first paper.

It is a wonderful snapshot of what life was like in the early days of the Garden City (at the time, commonly called Missoula City, not Missoula).

Imagine sitting down with a cup of coffee, picking up the day’s paper and reading about Mr. D. F. Hanks of Hellgate.

He was “one of the oldest men in Montana,” a man having seen “more than seventy-two winters pass over his head.”

Originally from Illinois, Hanks had in his younger days “carried in his arms the infant Abraham Lincoln, late President of the United States.” He had given Abe “early lessons in reading and writing,” and had remained “bosom friends” until the end of Lincoln’s life.

Hanks still carried with him a “silver watch which Lincoln owned during his early struggles in Illinois, and which was considered an heirloom in that industrious man’s family.”

Nearby, there’s a construction update on the new courthouse and county jail, both said to be nearing completion.

The courthouse is described as “splendid,” especially its strong and substantial roof. The jail has walls “thick enough to withstand a bombardment,” and containing no windows; the townsfolk apparently tired of jailbreaks.

Then, there’s the poetry:

“One pleasant eve to take a walk, don’t deem it strange,

To rid myself of idle talk, and spend some change;

I seldom drink, but very soon, I found myself in Con’s Saloon.

All you that feel inclined to test, some liquors of the very best,

Try Con and Tom, of this be sure, you’ll find they keep their liquors pure!”

In response, another purveyor of potable elixirs took out ad space to declare: “Poets have sung of inspiration, which, in most cases, is a myth; but for genuine konkoktions of nectar, which will inspire man with deeds of noble daring, the taking of Metz, or any other man, call at Johnny Parker’s saloon, just opened.”

Poetry aside, there are – or should be  – consequences for those who may overstay their time at the bar room. The Pioneer’s editor took a few paragraphs to demand local authorities pick up the “inebriated, pediculus-looking individuals … rolling around the streets, apparently in doubt as to whether they would go home or make a resting-place on the soft side of the plank.”

Mining reports included a note that Charles Barkley, “a merchant in Kootenai and formerly a packer to Bear Gulch,” staked a claim in Idaho paying “$10 a day to the hands.”  Another dispatch from the camps told of miners in Louiseville (near modern-day Superior) planning to “drive off every Chinaman on Cedar Creek.”

There was a report that four men arrested west of Missoula back in July for a murder at Wolf Lodge had been acquitted in Idaho Territory for lack of evidence.

With the approach of the winter months, freight teams were arriving in Missoula en masse. “Thirteen wagons … arrived in town Thursday last from Corinne, with merchandise for Worden & Co. and J. P. Reinhard,” with another large shipment expected in a few days.

I don’t know what may have been contained in those shipments, but Helena’s Toole, Leach & Company assured Missoula’s ladies that they offer up the finest “gaiters, feathers, hats and gloves” and that “orders will be promptly attended to.” 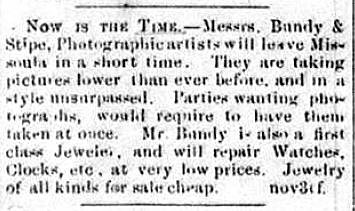 Messrs. Bundy and Stipe, advertising themselves as “photographic artists,” reminded locals they’d be leaving town soon – so time was short to have your picture taken. Oh, they also noted that Bundy was a first-class jeweler, with all sorts of stuff “for sale cheap.”

In another column, the paper’s editor felt compelled to ask for mercy from those who may been offended when one of his reporters, in covering a fancy ball the week before, had described some of the ladies as “matrons,” when he meant only to say they were married women … not, old.

Then there was a birth announcement from Sun River, which the Pioneer’s editor found perplexing: Jacob Smith’s wife “has had a pair of twins, (we don’t undertake to say whether a pair of twins counts four or only two children), weighing 25½ pounds.” The letter, reporting this news, failed to specify “if this pair of twins weighed 25½ pounds each … or, in the aggregate.”

So there you have it – my feeble defense. I’ll go back to my room now.