This is a story I’ve put off writing for more than three years because, well – it’s so complicated.

But there comes a time when you just have to let go, and accept that you may never be able to solve all the mysteries or answer all the unresolved questions.

One main part of this story – the death of Moses M. Drouillard, Missoula’s 11th sheriff – has been told and re-told, even in recent years.

It is the back-story that fascinates me – a tale of three prominent Missoula men and their unfortunate connection to one woman (a child, really, by today’s standards).

Let’s start with what many of you may already know.

Just three months later, on Sunday, December 15, 1878, the newly married Mrs. Drouillard “appeared at the County Clerk’s office to inform Mr. (Frank) Woody that her husband had shot himself.”

A year later, in December 1879, Mary was convicted of 2nd degree murder and ordered to serve 15 years in the state penitentiary.

Only a few months into her term, in the spring of 1880, prisoner Drouillard was transferred by the penitentiary warden to a nearby hospital because the convict was enceinte (a word commonly used in the 1800s to mean an unwed mother who brings shame to her family). 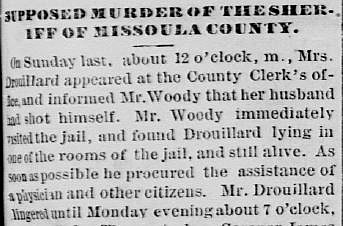 Obviously, she had become pregnant while awaiting trial in the Missoula jail in 1879. She gave birth to a baby girl, who was quickly adopted but died a few months later.

Mary Angeline Drouillard was eventually pardoned, after serving three years. A ledger entry simply noted a payment to E. L. Bonner & Company in the amount of $15 for “clothing for discharged convict Mary Drouillard,” on August 22, 1882.

At this point, Mary virtually disappeared from sight, and from the headlines. There are reports she may have moved to Walla Walla, Washington, where her mother lived. Probably so.

All this leaves us with so many unresolved questions: Did Mary shoot the sheriff? (There actually were other possible suspects.) What really happened? Who was the father of the child born while Mary was in prison?

And the most the intriguing questions: Who were these two people with the biblical names of Mary and Moses? How did they come to be together? Was Mary the villain she was made out to be? Or was she the innocent victim of a cruel husband? As it turns out, it could have been either – or both.

For insight, we must go back nearly a decade – to 1870, when Mary was first wed, at the tender age of 14 or 15, to the first of our trio of prominent Missoula men, Cyrus McWhirk.

A farmer from Walla Walla, Cyrus had moved to western Montana about 1862, working first at Fort Owen near Stevensville, then moving north to Missoula where he acquired 160 acres of land, stretching from what is now downtown Missoula east toward Hellgate Canyon and north toward the Rattlesnake.

His older brother William, who had suffered some financial setbacks in Washington, joined Cy in Missoula in1866. While William always seemed to draw most of the newspaper headlines in Missoula and the Bitter Root through numerous land deals and business ventures, it was really Cyrus who had put everything in place to succeed.

Cy, with his farming roots, made very productive use of those 160 acres. The Helena Weekly Herald noted the gardens included a “small grape vine laden with ten or twelve large bunch of grapes (which) we believe is the first instance of grapes having been produced in Montana.”

The variety was reported to be “Concord,” and according to the article, “This surely should remove all doubt concerning fruit raising in Montana.” In fact, the McWhirk brothers are often cited as giving Missoula City its nickname, the Garden City.

The brothers’ business ventures were wide and varied, including orchards, a shooting gallery, a general store and the McWhirk Brothers saloon on Main Street.

Part of that 160 acres they owned later became the “McWhirk addition” as the town developed, with properly laid out streets and avenues.

Now, also living in Missoula in 1870 was a French Canadian by the name of Henry F. Thibault.  Census records indicate Henry was an unemployed carpenter. His family included a young daughter, Marie Angelina.

Just how 33-year-old Cyrus McWhirk and Marie (Mary) Angelina Thibault came to hook up is a mystery (it’s hard to imagine a girl of 14 hanging out in a saloon, even in 1870). It’s possible the unemployed carpenter was looking to marry off his young daughter to some well-to-do local man.

In any event, the two were married on April 17 of that year, settling into a home at 503 East Front Street. It was by all accounts not a match made in heaven.

By early the next year, scandalous rumors circulated about the community, resulting in Mary abandoning Cyrus for a time. Then, on July 27, 1871 – in an astonishing bit of journalism(?) – the Missoula Pioneer newspaper printed the following:

“Domestic Happiness Restored. We are indeed glad to state that Cy McWhirk’s wife has returned to their little family circle, and hope that hereafter the mischief-breeding tongues of either pretended friends or relations will not been heeded by her, but that she will cling to him whom she has chosen as her guide and protector over life’s stormy voyage, forsaking father and mother, and cleaving to him, and him alone.”

The article concluded, “She is very young, and, perhaps, too susceptible to evil influences. In view of this we would counsel Cy to forgive and forget, and bear with her until she can love him too well to listen to the venomous words of others.”

Whatever scandalous events that were apparently common knowledge in the community were not cited in the remarkable article, although there was an implication that Mary may have been a girl of loose morals.

In any event, the couple was reunited and Mary soon gave birth to a daughter, Clara, in 1872. Still it was a very troubled marriage.

On August 4, 1872, the teenage mother bundled up her newborn daughter and abandoned Cyrus, who she claimed was cruel and abusive. She stayed with her parents who had since moved from Missoula to Walla Walla.

Months later, on January 11, 1873, Cyrus filed for divorce, claiming he’d been abandoned while having had done nothing but treat his young wife with “kindness and affection,” and provided her with “a good house and with all the necessities and comforts of life.”

He claimed it was Mary who was “of a violent and cruel passion and temper” and was “wholly incapable of having the custody and education” of their daughter, Clara. Remarkably, the two soon reconciled and the divorce action was dropped.

Meantime, much of the McWhirk land was sold off in 1874 – 10 acres to A. J. Urlin and the rest of the “McWhirk Addition” to “Messrs. Worden, McCormick, Kennett and Moore, for the sum of $1,200,” according the Helena Weekly Herald.

On March 25, 1875, Mary gave birth to the couple’s second child, Georgia, and – are you ready for it? – within months, Mary files for divorce.

She said McWhirk “struck me with his fist, knocked me down, kicked (me) in (the) side and dragged me out of the house and told me if I came back in the house he would kill me. I was compelled to go to my friends and (stay) for about three months.”

Then inexplicably, with her divorce paperwork still on file, she returned to the McWhirk home solely on Cyrus’ “promise” that he “would not ill-treat me again in the manner which he had.”

Court records back up her story in both assault cases. On Oct 5, 1875, Justice of the Peace Thomas M. Pomeroy ordered McWhirk arrested. He was “convicted of assault and battery and fined $50.” Then, on March 20, 1876, Cyrus was again arrested, convicted and fined $100.

In a new court filing, this one dated June 12, 1876, Mary added more testimony to her  divorce paperwork. She charged that McWhirk had “failed to provide proper and sufficient food for his family,” something backed up by the local doctor, Dr. John B. Buker.

Buker signed a statement saying he found Mary to be “suffering and exhausted from (lack) of food.” He prepared her a cup of tea and a piece of dry bread – the only food in the house –  and stayed with her all day into the night. “About two o’clock in the morning,” he said, Cyrus McWhirk “returned, very much intoxicated, so much so he was incapable of taking care of (Mary).”

Finally, on July 1, 1876, District Court Judge Hiram Knowles granted Mary her divorce. Alimony was set at $500 and Cyrus McWhirk was ordered to pay $50 for attorneys and other costs.

For a time, both Cyrus and Mary dropped from the local headlines. But, in a dispatch in the fall of 1880, we learned that Cyrus McWhirk, once a man of great wealth, was now penniless and seriously ill in Fort Benton. Just months later, on February 20, 1881, he died.

The River Press reported, “Being in indigent circumstances, (McWhirk) applied for aid from the county, which was given him. Everything possible was done for the poor fellow, but to no avail, and he quietly faded out of existence.”

As for Marie (Mary) Angelina Thibault McWhirk, there is much, much more to tell.

Our series will continue next week.

This series would not have been possible without the assistance of Keith Belcher at the Missoula County records center who found many of the historical documents on which the stories are based. Also invaluable was the assistance of Bill Lawrence, a friend and retired attorney, whose passion for genealogical research is unmatched.