A trip over Marshall Grade east of Missoula has scared the socks off adults and children alike for generations.

“We passed over (Marshall Grade) in a light wagon with some ladies and children, and a little girl who sat beside us clutched our hand in fright!” wrote a Weekly Missoulian reporter in 1880.

Nearly 30 years later, in 1908, two young men were “returning from a ball game at Bonner” when their buggy broke down, frightening their horse which “dashed into another rig coming up the hill.

“The force of the impact was so great that the second horse was knocked off the steep embankment.” The occupants of the buggy, thrown into a wire fence, watched as the “horse and buggy continued to turn somersaults down the steep mountainside.”

The two baseball players tried to control their horse and what was left of the buggy, but “after being dragged several yards” let loose of the reins. “The horse, pulling two wheels of the buggy along with him, was captured at the detention hospital by some of the inmates of that place,” near the bottom of the grade.

Whenever the spring runoff was significant, Marshall Grade was the first to go: “The Marshall Grade, three miles from town is a ruin,” reported Deer Lodge’s New North-West newspaper in 1876.

Fifty-five steel beams and 1,400 tons of concrete, it’s hoped, will solve what has been a 150-year-old problem.

Newspaper accounts back to the 1870s have called “Marshall Grade a mess,” injuring road workers and travelers alike. The Helena Weekly Herald reported a worker “fell from a wagon (dislocating) his shoulder … whilst repairing the Marshall Grade” in the summer of 1872.

In 1877, news accounts had repair work “progressing favorably,” with “thirty-four days’ labor” put in and another month to go. By completion, the “road will involve seventy days’ labor at a cost of $210.”

Even with the “federal aid job” completed, the problems persisted.

In July 1925, “a landslide on Marshall Grade completely covered the county steam shovel (but) none of the crew was caught in the slide.”

A month later, so many slides were occurring that “a watchman is stationed at the point and warning lights have been placed as a precaution.”

In the spring of 1931, “A caterpillar and grader from the State Highway Commission’s district office” worked on the same section of road “to make it conform with the new road on either side.” Again, in 1936, slides blocked the road.

And so it went. Land, sliding and sloughing; cars, crashing and plunging. It was commonplace, even into the 1950s. “Two thousand yards of rock threatened to slide” in 1952.

Of course, there were always those who treated the challenges of the Marshall Grade as their personal speedway. 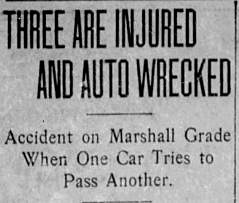 In 1924, two eastbound speedsters tangled. Three men in one car tried passing another car when “the right front wheel of the car carrying the three men struck the left hind wheel of the other car (raising the passing car) so high in the air (you) could see underneath” it.

The passing car spun out of control and rolled, the three occupants were hospitalized, and the car was deemed a total wreck. The car being passed ended up in the ditch.

Today, with 150 years of improvements, hopefully a trip up the Marshall Grade will be a safe and scenic drive for all.

Still, watch out for the speedsters.