“There is to be a new town in the valley. It will be located below Stevensville and the Three Mile Bench and will be a model place (named) Bitter Root.”

The centerpiece of the new town, a hotel named the Bitter Root Inn, would be designed by none other than Frank Lloyd Wright!

The homes built nearby would be in a district known as Sunnyside Orchards, as each homesite would include an apple orchard.

Now, I know the Sunnyside Orchards area very well. I live just down the road from there. I spent about 30 years commuting to a TV news job in Missoula from this location; then, the last 11 years retired in this same spot.

But a town nearby? A hotel? Nope – never heard that story. Well, as it turns out, it’s all true – at least as far as the hotel and orchard-homesites.

To transform the Sunnyside area’s arid land into rich planting soil, allowing orchards and commercial development, required the construction of Lake Como reservoir and the “Big Ditch” to bring that water north.

That, of course, required money – and lots of it. Enter Chicago financier, W. I. Moody who helped Samuel Dinsmore form the Bitter Root Irrigation Company, which then recruited university professors from Chicago and elsewhere to talk up the enterprise.

The Bitter Root Irrigation company’s plan was to recoup its investment by selling 10-acre orchard lots with the “most beautiful landscape in the world (with) the magnificence of the grand mountains over across the valley” to the west.

The targets of the planned-community marketing were out-of-state lawyers, doctors, university professors and others who would like a summer retreat in a magnificent setting.

Zeislerin discovered that while the Bitter Root Inn was designed by a young Frank Lloyd Wright, “in the early stages of his career,” it was actually built by carpenters hired by the irrigation company.

Among the first social events held at the Bitter Root Inn was a luncheon, hosted by Mrs. W. M. Noble in October 1910 for a couple dozen Hamilton ladies, including Madame Marcus Daly.

“The dining room of the Inn was beautiful in decoration of flowers and autumn leaves,” wrote Stevensville’s Western News, “while the tables were made most attractive with pyramids of red McIntosh apples.”

Members of Missoula’s Kappa Kappa Gamma motored to the Inn that fall as well, enjoying an “elaborate and delicious dinner,” then singing and laughing themselves all the way home.

The St. Paul Pioneer Press added full-page regional coverage to the new enterprise, in a 1910 year-end story which included numerous photographs of the Inn and its golf links along with shots of Lake Como.

Just about everyone, it seemed, was praising the idea of an apple orchard boom in what was promoted as an “insect-free valley.”

But trouble was on the horizon. Some people who invested in property sight unseen filed lawsuits when they discovered there were no orchard trees planted on their parcels or that the trees had been infested with blight.

In fact, Dr. R. A. Cooley at the Montana State College Experiment Station, had discovered the valley was anything but insect-free, detecting apple scab, fire blight, codling moth and leaf roller. In 1913, blight devastated the apple crop. 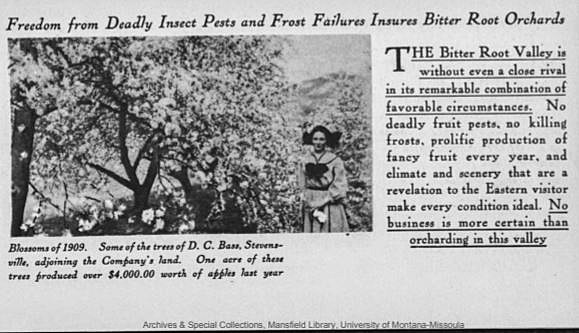 The irrigation company quickly found itself in financial trouble, and by 1916 was bankrupt.

While the town of Bitter Root never flowered, the Bitter Root Inn remained popular into the mid-1920s, with dinners and dances – until the night of July 28, 1924.

The Frank Lloyd Wright-designed building, said to worth $20,000 (including an estimated $4,000 in specially designed glass, alone), was destroyed by fire. The cause was said to be faulty wiring. 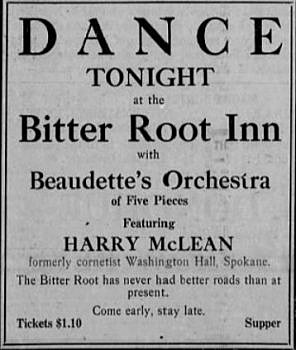 Curiously, it was not the only loss suffered by its owner at the time, Stevensville rancher R. A. Terry. His cheese factory burned in January 1924. Then, in a single month – August – a ranch house, a garage and car, and the Bitter Root Inn were all destroyed by fire.

Ah, to think of what could have been: a wonderful little town with its own golf course, surrounded by 10-acre, apple-treed ranchettes, and in the center of it all – fine dining at the Bitter Root Inn.

Best of all – my mailing address would likely be Bitter Root, Montana, with its own Zip Code. Sounds rather appealing.