First was the origin story of the University of Montana’s student newspaper’s name: its flag.

Kaimin, the students said, was a “Kalispel and Selish” word meaning “anything written or printed, or in its broader sense, the pen, pencil or paper with which the writing was done.”

But second, they proceeded to tell me I’d been mispronouncing the word all these years. The accent, they said, is on the second syllable – and the “i” in that second syllable is pronounced as though it were an “e.”

The editor-in-chief was a young man by the name of Charles Pixley, who was described as “one of the foremost students of the university.” Pixley went on to attend Rush Medical College in Chicago, returning to Missoula in 1901, passing the state boards, and taking a position as assistant surgeon at the Northern Pacific Hospital.

A year later, he opened a private practice in the First National Bank building downtown and quickly immersed himself in the community. He was a charter member of the Missoula County Medical Society, was on the board of health, served as the county health officer for a number of years, and was a longtime member of the Elks Lodge. 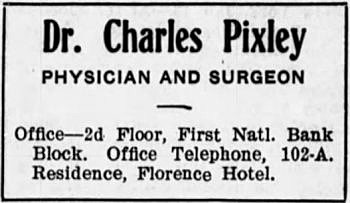 In 1907, Dr. Pixley contracted diphtheria, and the next year took an extended vacation. The Missoulian newspaper put it this way: “Years of professional labor has rendered it imperative that Dr. Pixley take a long vacation with entire freedom from a doctor’s worries.” He resumed his practice later, but took life at a slower pace.

Dr. Kennett (who, by the way, was captain of the university’s first football team) initially served as a “house surgeon” at Presbyterian Hospital in Chicago, then bought a medical practice in Virginia City in 1904.

Dr. Rennick, who attended a Louisville, Kentucky medical school on a Montana scholarship, settled in the Bitterroot Valley, buying a ranch property and medical practice in Victor.

Then there were the literary editors of the fledgling Kaimin: Louise Hathaway and Ellis Sedman.

Ms. Hathaway, who in high school had been called “an unusually fine elocutionist for her age,” graduated with a bachelor of arts degree from the university in 1899.

She was immediately hired by the state board of education as an assistant in the university’s preparatory department. She resigned that position in 1904, eventually marrying “Professor Harkins of the University of Chicago.”

Ellis Sedman, who graduated from the University of Montana in 1901, went on to Harvard University’s law college and was admitted to the Boston bar in 1906. He then worked as a corporate attorney for a well-established Boston law firm.

The final member of the 1898 Kaimin staff was Zoe Bellew, Class of ‘99. She pursued a career as a sixth-grade teacher at Missoula’s Irving School and later as a high school history teacher. In 1907, she moved to the Bitterroot Valley after marrying Sidney Ward, a 1901 university graduate and cattle rancher from Hamilton.

Now, it just might be that Zoe Bellew’s participation on that first Kaimin editorial staff had a direct connection to the choice of the newspaper’s name.

Zoe grew up on the Flathead Reservation. There are numerous news clippings of her returning to her family home there over the years. That included one case in which she had to take time off from teaching her high school history class to recover from a badly ulcerated tooth.

It would also appear likely that Zoe Elizabeth Bellew was the one to explain the proper pronunciation of the name, Kaimin.

What an incredible group of young newspaper pioneers those six were – and what incredible accomplishments they had in life: two teachers, a lawyer and three medical doctors. Not bad for that newly established state university. Not bad.