Today, the tan and green structure in the foreground of the photo to the right (the southeast corner of Front and Ryman streets) is a rather unassuming office building. For many longtime Missoulians, though, it will always be known as the site of the Star Garage.

Cave (1863-1954) spent almost his entire life in Missoula documenting the changes to the town occurring over the decades.

In the mid-1860s, after constructing a sawmill and a flour mill down by the river, Cave says city founders Frank Worden and Captain Higgins built a two-story frame building for their Worden & Company store on the exact spot which is today the 140 block of West Front Street.

The ground level housed the retail store. Cave says the second level was used as a Masonic hall.

In the decades to follow, the location would morph into a livery stable, a car dealership, a service station and auto garage, a restaurant, and by the 1970s, the popular Star Garage Disco, designed with a “speakeasy” décor.

Back in the early days – the 1880s – it was the site of the Eclipse Livery Stable, operated by John V. Hayes.

Then around 1892, an impressive two-story brick building was constructed at the site, continuing as a livery on the ground level with a mortuary on the upper level.

As horses gave way to the automobile, a man named Ira Watson (other reports say Ira Johnston) opened an automobile garage at the site (149 W. Front), in 1915. Advertising for the business encouraged car owners to “come and select a stall for your car. Phone 940.” 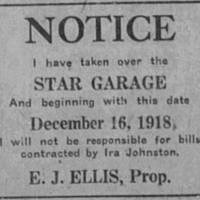 Near the end of 1918, the garage was in the hands of E. J. Ellis. A year later, the company was reorganized into a corporation named the Front Street Motor Company.

In 1920 or 1921, W. W. Wickes sold his interest in the “Motor Company” and bought the entire building solely for its “storage accommodations,” leasing out the repair shop. Early photos show W.W. Wickes’ name over the door of the building. 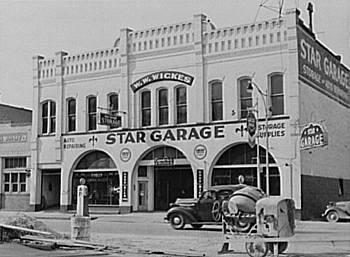 Later photos of the garage reveal the name shortened to “Wickes,” after his son Tom A. Wickes assumed ownership.

In 1970, the building was purchased by a Spokane firm with plans to open a restaurant. Part of the remodeling included removing the second story of the structure, while keeping the iconic arches on the street level.

Many of you probably remember the Jekyll and Hyde Pub franchise on the main level, with a discotheque in the basement dubbed The Star Garage (in a nod to the past).

Jekyll and Hyde then morphed into the Sundowner, then the Acapulco restaurant.

So many changes over the years – from Missoula’s first business house in the 1860s to a modern office space today – but probably remembered by most as the Star Garage.