“The most extensive fire that has visited Butte in more than a year,” reported the Anaconda Standard newspaper in January 1898, “destroyed about $25,000 worth of property.”

Lodgers in rooms above the store “narrowly escaped from suffocation,” and a packed house at McGuire’s opera house next door had to be evacuated.

The big loser was “George S. Hoaglin, proprietor of the Boston Store at 54 and 56 West Broadway, whose general merchandise is nearly a total loss.”

The Standard reported, “The cause of the fire is somewhat of a mystery,” and an arson investigation was begun,” with “a number of clerks taken to police headquarters where they were” questioned.

Hoaglin and his wife, meantime, had headed to the train station to catch the 9:25 train to New York, ostensibly on a merchandise buying trip. When they were notified of the fire, they returned to the scene.

Hoaglin told authorities he had personally checked the heating system before leaving the building, noting they had been having trouble with a loose stovepipe in the past. He said everything checked out fine, so they departed for the train.

That didn’t quite line up with the fire investigation. For the flames to have made such headway before the fire department was called, the blaze had to have been burning a long time before it was reported by a passerby at 9:15 p. m.

Soon there were other questions raised, including: Who was this George S. Hoaglin fellow, anyway? And most of the questions were coming from Missoula.

Two days after the fire, the Missoulian newspaper uncovered the fact that G. S. Hoaglin of Butte was the very same person who’d done business in the Missoula-Stevensville area for years, but under the name “Archie B. Hoaglin.” 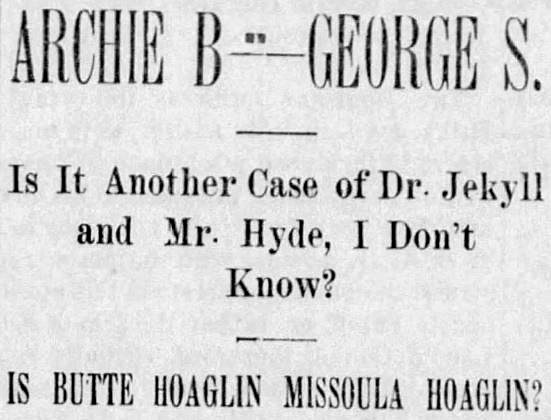 Why the name change? The Missoula newspaper headlined: “Is this another case of Dr. Jekyll and Mr. Hyde … Is Butte Hoaglin Missoula Hoaglin?” And, that was just the first question.

Locals “whistled” when they heard how much insurance coverage the mystery man had taken out for his Butte store.

They chuckled at an affidavit by Hoaglin that he’d pay anyone $1,000 if they could “point to any dishonest act of his.” Many groused that they could quite easily “secure that $1,000” – and put the lie to some of Hoaglin’s claims.

“What puzzles the people of Missoula,” the Missoulian went on, “is that Mr. Hoaglin should change his name when he went to Butte.” The man explained to the newspaper reporter “that his name is really George S. Hoaglin and that he did business in Missoula in his wife’s name which is A. B. Hoaglin.”

That caused the Missoulian newspaper to label Mr. Archie B. Hoaglin as, “either a notorious liar, (one who) has a faulty memory or (one who) was changed in his cradle when a babe and but recently became aware of the fact that he was mixed up in infancy.

The fact is, said the paper, when he arrived in Missoula around 1890, “He gained residence in Montana and registered to vote in Missoula under the name Archie B. Hoaglin.” He signed business letters with that name and gave his son that name.

Papers were also uncovered from the man’s brother in Iowa, written to a Missoula attorney, “alleging that ‘Archie’ had swindled him and wanting his stock attached.”

The Missoulian then pointed out another example of the man’s lack of veracity: Hoaglin claimed to have been “assistant manager of the Missoula Mercantile company which he never was. He was employed for a while as an ad writer under Mr. Settles, manager of the dry goods department. That is all.”

In sum, Archie B. Hoaglin’s career, according to the Missoulian newspaper, “wasn’t notable,” adding “he struggled along as a clerk until he went into business for himself, then he struggled some more.”

Hoaglin’s franchise of the “Boston Store” in Missoula’s newly constructed Union Block in the latter 1890s didn’t last long, nor did a similar venture in Stevensville.

It was then he left for Butte, changed his name, and attempted another “Boston Store” franchise in Butte in the summer of 1897. Six months later – the fire.

No charges were ever brought against the mysterious Mr. Hoaglin in connection with the fire, and press coverage of the man dwindled over time, except to note occasional return visits to Missoula to see acquaintances.

Meantime the Boston Store franchises continued to grow across the country (from Louisiana to Alaska) well into the 20th century – apparently doing slightly better that the Hoaglin attempt in Missoula and Butte.