Art, libel and beautiful snow – all are topics of interest as I page through an 1887 copy of the Philipsburg Mail newspaper.

I see that Mr. E.E. Kinney is becoming quite an artist. According to the article, he started out quite crudely, but with time began turning out beautiful work: “Washington’s portrait, the Farmer Boy, and some drawings of still life.”

Mr. Kinney is apparently hoping that taking classes will cement his mastery of art done with pencil, charcoal and pen, opening a door for him as a teacher in the public schools.

Yes, the small mining community of Philipsburg had its own art school in 1887! Who would have thought?

Art school director C. K. Bowring mused on that question in a newspaper advertisement: “Who, in a mining camp, has a love for the fine arts? Who has (seen) this land of beautiful valleys and grand lofty mountains? Whoever admires beautiful things in nature loves art!”

Therefore, Bowring’s Art School at 505 Broadway, proclaimed the artist, is “among the many thriving institutions of Philipsburg.”

That, says he, is no accident. After all, “(I am) no amateur at the business, but, on the contrary, (am) a thorough instructor and gifted artist of over twenty years’ experience.”

Elsewhere in the paper, Bryan & McCoy, proprietors of the Philipsbug Mail, delightedly wrote: “At last the Mail has cast aside its swaddling clothes and become a full-fledged newspaper; the one thing that was lacking to place it in the front rank of journalism being about to be supplied in the shape of a suit for libel!”

The pair continued, “(O)ur report of this great trial will be minute in detail, including numerous developments of a highly sensational character, which, through inadvertency on the part of the prosecution, will not be cited in the original complaint.”

Hmm, I’ll have to follow up on that story.

Meantime, Bryan and McCoy were quite taken aback when reading “exchange-papers” from other scribblers in the region, to the effect that 17 inches of snow had fallen in Philipsbug on May 1, 1887.

“We do not know what empty-headed idiot is the father of this report nor do we much care as the parties most interested probably know it to be be untrue and that the fall of snow did not exceed half an inch which was dissipated by the sun before the end of the day.”

The publishers of the Mail reminded readers, “We are here to profit from the Philipsburg boom instead of manufacturing it, after the manner of certain Montana papers which we might name.” They were tempted, but chose not to “brand the author as ‘an infamous liar,’ ‘addlepated sore-head subsidized by some jealous rival,’ etc., etc.” 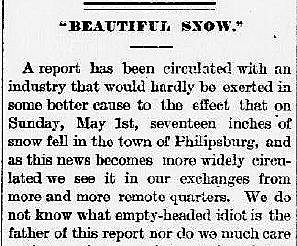 They concluded, “We wish to assure the naturally anxious public that when seventeen inches of anything falls in Philipsburg we will let them know!”

Now, after all that, one might be inclined to waltz over to Henry Imkamp’s place – it’s just down the street from Bowring’s Art School – and indulge in some of their fine “wines, liquors and cigars.”

Depending on what kind of day you’ve had, their advertisement assures that they will console you with “Anheuser Busch Bottled Beer for sale by the case or carload.”

It sounds as though, given the week the local newspaper publishers have had, that might prove a challenging choice for the local scribblers of P-Burg.