Now and then it’s fun to explore the stories connected to Missoula’s streets and avenues.

After the Civil War, a couple of former soldiers from Indiana hired on with Nelson Story (one of the founders of Bozeman) to drive Texas cattle up into the Gallatin valley. They also took a wagon train of supplies to set up a store.

It was 1866. The young men were hungry for adventure.

One of them was Major John B. Catlin, who eventually set up a homestead near Hamilton in the Bitter Root valley. Later he would lead a group of volunteers who pursued the Nez Perce to the Big Hole.

According to a brief biography on the Missoula city website, “John settled in the Bitterroot Valley where other families from Indiana had located. These families built an outside fence around their homesteads which was known far and wide as the ‘Big Corral.’ He sold the ranch in 1880.”

That same biography says, “John and a partner purchased the Bell Brothers Hotel. He later purchased a livery stable which was burned by a fire spread from the saloon. John filed many placer mining claims in Bitterroot streams and was an incorporator of the Mountain Chief Mining Company.”

Catlin was a delegate to the second Montana constitutional convention in 1884, served for a time as an Indian agent on the Blackfeet Reservation, and in 1890 “was appointed receiver in the new Missoula land office.”

Catlin spent his final years at his home in Missoula.

One writer, in 1917, upon Catlin’s death at age 80, said, “Major Catlin is gone. No longer does the lonely cry of the prairie wolf float across an unpopulated land. Civilization’s mark is everywhere, and where the old prairie schooner rocked slowly westward, huge electric motors whirl by each day. But history has been vividly written and the names and the deeds of such men as Maj. John Catlin have been indelibly inscribed.”

Catlin’s name is also “indelibly inscribed” on a street sign in Missoula. 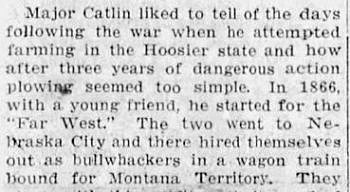 That happened in 1938, when city fathers decided to make the byways more logical by naming each east-west roadway a “street,” and all north-south arteries “avenues.” They also wanted to clean up any duplication in names.

Arthur avenue was changed to Catlin avenue, “in honor of Major John Catlin, famous pioneer, Indian fighter and developer in the community.” Helen avenue in the University district was re-named John avenue, Helena avenue (near the fairgrounds) re-named Maud avenue.

Over the years some folks have mistakenly attributed the Missoula street name to Pope Catlin (b. 1839), John’s (b. 1837) younger brother.

Just like John, Pope Catlin was a Civil War veteran, a Montana pioneer and a well-known area businessman.

Pope Catlin and his new bride, Miss Alcina F. Harris, came west to the Bitter Root valley by covered wagon in 1871. Three years later the couple moved to Missoula, where they would spend the rest of their lives.

Pope operated a freight business, and later helped run Missoula’s St. Charles hotel. In 1897 he became “one of the first forest rangers of the state.” He died at age 85. 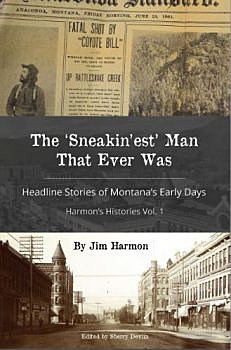