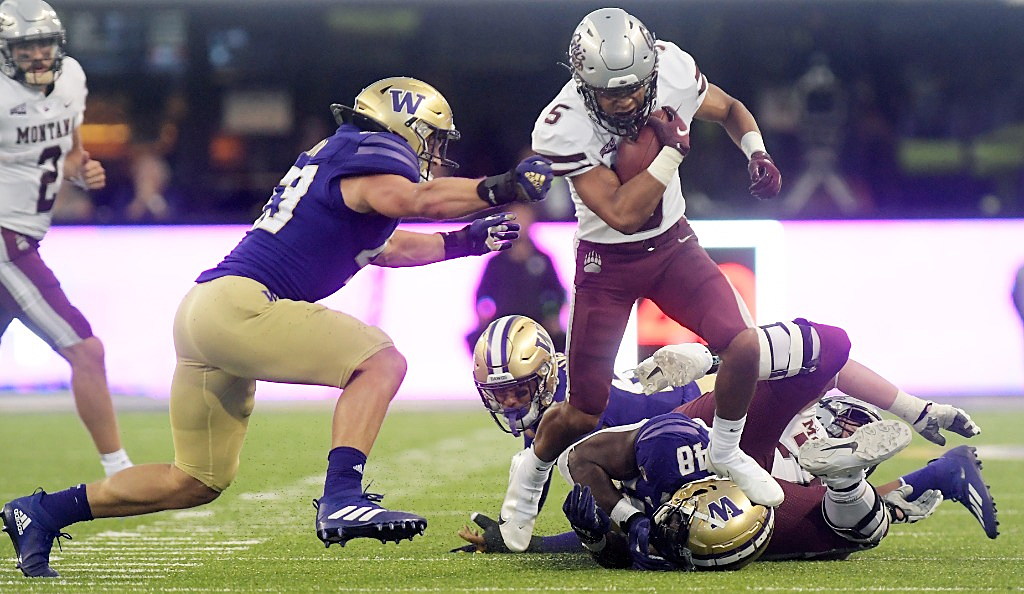 (Gogrix.com) The Montana Grizzlies pulled off perhaps the biggest win in program history and one of the biggest upsets in FCS history as UM marched into Seattle and came away with a 13-7 win over the #20 Washington Huskies to open the season Saturday.

The game, a defensive showcase for the Griz, will go down in history as just the sixth FCS win over a ranked FBS opponent in the last 40 years.

Montana held the high-powered Husky offense to just 65 rushing yards and came away with three interceptions at key moments to hold UW off the scoreboard for three quarters after they scored on the opening drive of the game.

Offensively, hometown QB Cam Humphrey orchestrated two second-half scoring drives highlighted by a diving four-yard rushing touchdown of his own, after struggling in the first half. The 10 fourth quarter points proved the difference maker as the Griz put the Huskies in a kennel for the first time in over a hundred years.

The win improves Humphrey to 6-0 as a starter at Montana. It also marks the Grizzlies’ first win over a Pac-12 opponent since 1996, when Montana defeated Oregon State in Corvallis 35-14.

For head coach Bobby Hauck, who earned his 99th career victory as head coach at UM, the belief his Grizzlies could pull off the improbable was always there.

“That was certainly a good win for our team. I like our team. I’ve felt good about our team through the whole offseason. They were ready to play. They felt like they could win the game,” said Hauck.

We just came in here and beat a really good Washington team. They’re very sound in everything they do. They’ve got a good scheme, they’ve got good coaching, they’ve got good players, they’ve got great resources here. They’re a good football team. We’re very proud of getting this win. I’m just blessed to be the head coach and coach these guys because they play for us. Our assistant coaches had a great plan and it’s a fine, fine win. I’ve been coaching for a long time and I think this is the biggest win in my coaching career.”

Montana leaned on the defense to keep the game tight from the very beginning after winning the coin toss and electing to defer to the second half.

The Huskies worked their pro-style offense clinically on the opening possession, putting together a balanced nine-play, 78-yard drive capped by a Dylan Morris dive off right guard for a touchdown to go up 7-0.

Montana got its offense moving on the ensuing drive with freshman tailback Xavier Harris breaking loose for a 38-yard burst up the middle, shedding tackles down to the UW 11. That run would set up a 26-yard field goal for Grizzly debutant Kevin Macias to cut the Husky lead to 7-3. 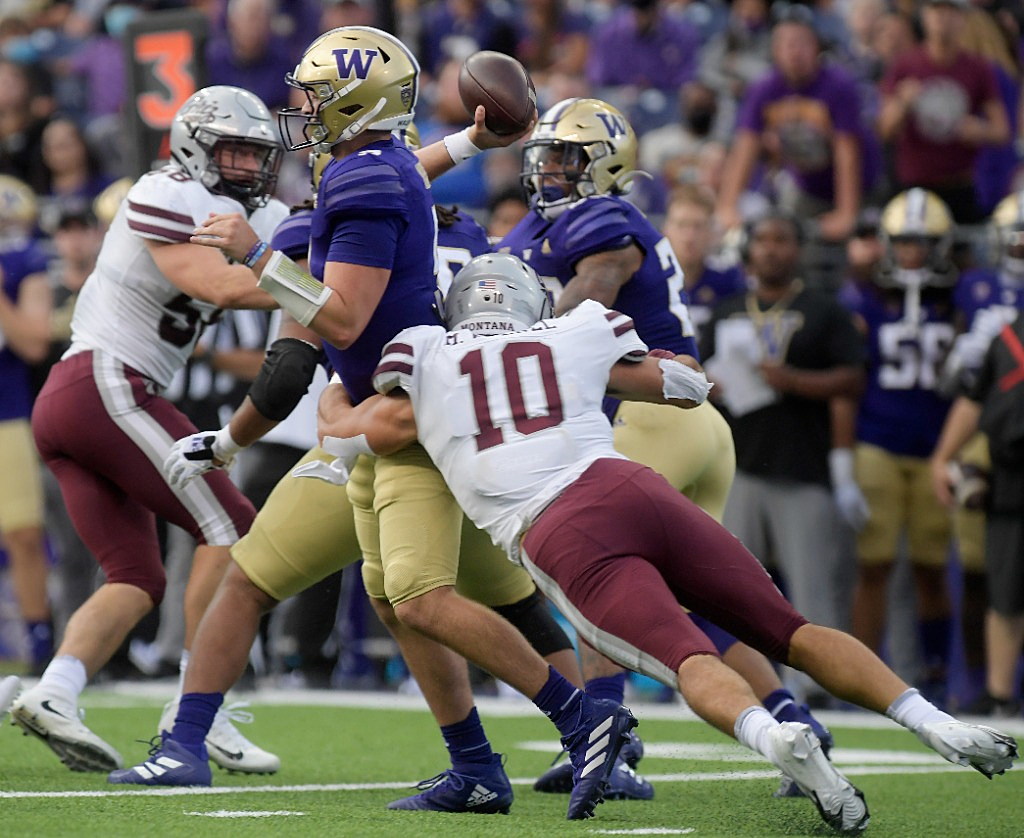 Penalties shot the Griz in the foot in the first quarter with a pair of personal fouls that helped the Huskies advance the ball downfield, but Montana’s defense held early despite the flags.

Later, Marcus Welnel, who led the defensive stand with 12 tackles, a sack, and what proved to be the game-winning interception, took down Morris for a loss of four. One incomplete pass later, the Grizzlies turned it over on downs at their own 32 for a key defensive stand that stymied the UW attack. Montana’s defense continued to put Washington under pressure in the second quarter, with Pat O’Connell putting in another sack to halt a Husky drive. It was a feather-in-the-cap moment for UM, with the Husky O-Line having only allowed a single sack in all of 2020,

Humphrey then got the Griz moving on offense, but the 4th down conversion attempt with a UM jumbo package on the field is stuffed and UM turns it over on downs around mid-field.

Montana’s defense continued to impress on the ensuing drive by forcing the Huskies to punt for a second-straight possession, but the offense couldn’t get moving as the Grizzlies punted for a third time in a row, buried deep in their own territory.

Gavin Robertson got the game’s first turnover just before halftime, hauling in a tip-pass for an interception to put an end to Washington’s fifth-straight drive as the Griz went to the locker room trailing 7-3, having held the Husky’s vaunted rushing attack to just 40 Yards. 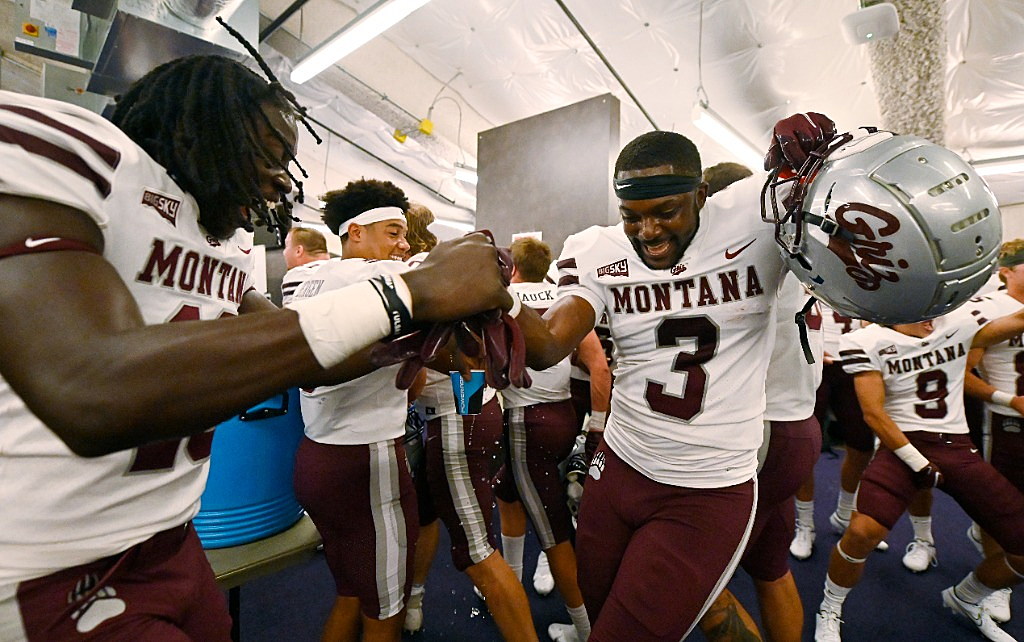 The second half started much the way the first ended, with both teams trading blows with defensive stops. Penalties continued to dog the Griz, however. Just when Montana seemed to get the ball rolling with Humphrey taking off for a 12-yard first down, flags negated all the momentum as Washington’s time of possession continued to build.

The back and forth continued until the fourth quarter when Humphrey and the Grizzly offense caught fire, putting together a 10-play, 69-yard drive that gave the Griz their first lead of the night.

Humphrey got settled in the pocket and connected with Mitch Roberts, Malik Flowers, and Cole Grossman, among others, as the Griz marched down into Husky territory. Humphrey capped the drive himself with a four-yard touchdown run that stunned the crowd and put UM up 10-7.

“It’s just resilience. Our O-line played amazing, our running backs ran the ball really, really well and like I said, I just had to do my job and cards fell,” said Humphrey.

“I don’t think our o-line can play any better than our o-line played tonight. They were outstanding, like Gavin and coach said, that’s a damn good football team over there. We held our own and they protected me all night. It was awesome.”

After another Interception by Robertson, the Griz marched down the field once again in a drive highlighted by a 17-yard burst up the middle by Isiah Childs that resulted in Macias slotting a 22-yard field goal that put UM up 13-7 with three minutes to play.

Welnel sealed the win for the Grizzlies with an interception with seconds to play as the Huskies were in two-minute offense mode. With the turnover, Humphrey brought the offense back on the field for one play in victory formation.

“We just did our thing. Our thing is being physical, play fast and tackle. That’s what we did all night,” said Hauck of his defense.