At the turn of the 20th century, there were three major modes of transportation: horses, bicycles and autos. Each came with its own set of problems.

There were fools on bicycles, runaway horses and unsafe auto drivers.

In the late 1890s, a group of foolish young men set off on a pre-dawn bicycle trip from Missoula to Hamilton, provisioned only with a small amount of food but a large quantity of alcohol. They made it back just before midnight, battered and bruised, with broken bicycles, swearing never to do such a thing again, but adding: “God bless the man that discovered beer!” 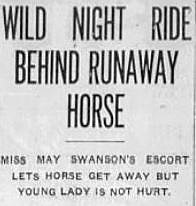 Then there was the case of Miss May Swanson. In the early morning hours of January 16, 1914, after attending a dance, E. Roach was returning his date, Miss Swanson, to her mother’s home on Worden Avenue in Missoula.

He stepped down from the buggy to assist her, when the horse bolted, taking the young lady on a fearsome ride at breakneck speed. The horse finally slowed a bit on “Waterworks Hill,” giving Miss Swanson a chance to jump out. She was unhurt.

That same year, Roy Stover, an auto driver for the Northern Pacific Express Company, was hauled into court for his reckless driving. He told the judge, “I can’t do my work without going fast. I don’t like to speed, but I have a certain amount of work to do, and if I drive slowly I can’t get it done.”

The judge didn’t buy it. He fined Stover 10 bucks, saying, “These drivers all give the same excuse, (but) we’re going to stop this reckless driving. Someone is going to be hurt if it keeps up.”

That brings us to today’s story: drivers’ licenses.

From 1914’s court appearance of Roy Stover, it took the state of Montana two decades before finally agreeing on laws regulating automobiles, their drivers, and a means of enforcing those laws.

Legislators grappled with the issue from the late 1920s to the mid-1930s. Finally in 1931, they passed a law requiring that automobiles must be registered with the state and license plates must be displayed on the vehicles.

As you might imagine, not everyone went along with the requirement. Oliver Nelson of Missoula was one of many nabbed by police that year and jailed for “driving an automobile without lights or license plates.” His car was impounded until he “secured a license.”

Four years later (May 14, 1935), drivers’ licenses became mandatory for “any person driving an automobile, truck or motorcycle (and required the driver) to have such a card in his possession while at the wheel of a machine on the highways.” The state, in the previous two years, “led the nation with a 74% increase in highway fatalities.”

The Montana Highway Patrol was created on the same timeline to carry out enforcement of the new regulations. But Governor Frank H. Cooney also made it clear that he expected the troopers to be not only efficient, but “courteous,” adding that they should “use the power to arrest as a last resort always.”

MHP estimates there were as many as 1,500 to 3,000 applicants for those first 24 trooper positions.

Meantime, bids were let for the printing of over 200,000 state drivers’ license blanks, and by mid-August 1935 about 150,000 licenses had been issued. A Missoulian newspaper reporter described the license-sales as “going as fast as hot dogs on a chilly carnival night in the fall.”

By comparison, licensing a dog in the 1930s was far more expensive than obtaining a drivers’ license: $2.50 for a male, $5 for a female. Perhaps that’s why only slightly more than 300 such licenses were purchased during the same time period.

The blue-colored 50-cent license allowed the holder to drive all types of cars.

A yellow-colored 25-cent license was a supplement to the main license. It allowed immediate family members to drive “the family car only.” By the way, Mrs. Ralph L. Starr obtained the first “woman drivers license” in Missoula. That, apparently, was another way of referring to the 25-cent license.

And with that, the “woman driver” jokes, sneers and snubs began.

While statistically, men crashed cars much more often per capita than women, that would never stop a man of the 1930s (and well beyond) from instantly scoffing at women drivers.

One national female columnist, Mrs. Norris, put it this way: “But no matter how we drive, men will always feel that to control high-powered machines is their distinct sphere, and will continue to regard us as irresponsible when at the wheel.”

Today, if you happen to be pulled over for a traffic violation, the trooper might likely be a woman like Amanda Villa, who this summer received the Patrol’s highest honor, the Medal of Valor, for rescuing the victims of a DNRC helicopter crash.

You no longer have the single choice of the traditional state drivers’ license office, which – deservedly or not – has become reviled by many a motorist as a time-consuming hell with employees who seem to have have long lost the ability to smile.

There are the new, private-enterprise businesses like MVD-Express, that claim to be “easier and more convenient.” I tried it – in and out in less than a half hour – with no appointment and only a tad more expensive with their small fee. Happy renewals, all!