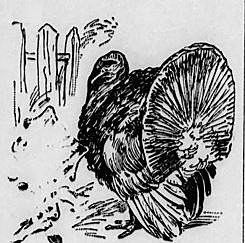 Missoulians wanted the best and freshest turkeys for their Thanksgiving Day fare in 1890. And not just any turkey would do.

They wanted turkeys raised in the Bitterroot Valley … “young, tender, juicy and fat.”

The Missoula Weekly Gazette wrote, “We sympathize with the people who had to eat turkeys shipped in from the states. Our turkeys come to us driven in on foot from the various (valley) ranches.”

Fresh, yes … but the work involved in preparing that turkey (just routine, back then) would probably not appeal to today’s generation.

“It wasn’t much of a trick to take him home, off with his head, and out with his feathers, then draw him and hang him in the frost all night. He looks tempting in the morning if his white flesh is blue-chilled from the frost.”

But there was so much more to do: The turkey was just the centerpiece of the holiday meal.

Missoulians “had pumpkin pies with a deep golden color almost as brown as the turkey with the basted skin, refined by fire and made appetizing. What pies!”

As this Weekly Gazette story continues, one gets the feeling this newspaper scribbler hasn’t eaten in weeks.

Here’s his description of the potatoes and celery: “Missoula potatoes, which had laughed while talking a hot bath until they had burst their skins at the elbows.”

“Celery! Great heavens, what celery! As crisp as a generous slice of our glorious autumn mornings, and as white as the crowns worn by our mountains.”

Similar praise was bestowed on the apples and the bread.

“Our tables groaned with plenty. Why shouldn’t we be thankful? We are and everybody else is. Hurrah for Missoula!”

In 1890, Missoula’s Thanksgiving celebration actually started the day before with the “firemen’s ball on Wednesday evening, (which) was the largest that had ever been held in Missoula up to that date,” according to the Gazette.

“The grand march saw ninety-six couples participating, and the festivities were kept up until nearly 4 o’clock on Thanksgiving morning. The dancers had supper at 12:30, some patronizing the ladies at the Methodist bazaar, while others went to the Saddle Rock, Model, and other restaurants.”

“The universal opinion was that the dance was the biggest and most successful affair ever known in the city!”

For those not participating in the fancy meals at private residences, the local hotels offered a place to feast.

“The Rogers Hotel was not outdone by any of its compeers, and set up a dinner fit for a Lucullus (a reference to a Roman general known “for the extreme luxury in which he lived, both in camp and at his estate outside Rome”).

It all sounds wonderful, but given the work involved in getting a live turkey ready for the oven (“off with his head, and out with his feathers”), most of us are probably happy we live in the day of the frozen bird from the local grocery store.

To one and all: Happy Thanksgiving 2021!