It is much maligned – even reviled and vilified. Oh, the lowly holiday fruitcake.

Some suggest it be used instead of sandbags during floods. Others joke that slices of it are perfect for balancing a wobbly table. Yet others recommend using it as a speed bump on your neighborhood street.

Why, there are even jokes about a “fourth wise man” appearing at the Christmastime manger who was turned away for bringing it as a gift for baby Jesus.

But today it is celebrated. Yes today, December 27th, is National Fruitcake Day!

The fruitcake dates back to ancient Egypt, where it was placed at grave sites. The dearly departed needed something to nibble in the afterlife.

Eventually, alcohol was added as a preservative. It worked so well that fruitcakes could last for years – just pour in a little more brandy to extend the expiration date.

In England, Queen Victoria made fruitcake a tradition, enjoying a slice of it with her afternoon tea.

In 1897, the New York Daily Tribune reported that in the days of William the Conqueror, the traditional recipe called for “a pound of powdered sugar, three-quarters of a pound of butter, a pound of flour dried and sifted, and ten eggs.”

Then add “three and a half pounds of stoned raisins, the same amount of currants, half a pound of sliced citron and four ounces of almonds, blanched and shredded. For seasoning, use one tablespoon of cloves, two of cinnamon and one grated nutmeg, a wine glass full of brandy and one of wine.”

In 1893, a huge holiday party was staged in Butte by publishers of the Standard and the Miner for their “newsboys” who delivered the papers. Featured on the menu, along with roast turkey, beef and ham, were jelly rolls and fruitcake.

Over time, though, the fruitcake became less appreciated.

These days, despite millions still being made and sold, the heavy, rock-solid holiday cake has become more of a joke than a tasty treat.

The Tonight Show’s Johnny Carson delighted in making jokes about fruitcakes. In one show, he had a fruitcake delivered to him on a forklift. He struggled to lift the heavy cake, and when he placed it on the desk, the entire desk collapsed!

Now, there is even a national Fruitcake Toss Day, although the exact date is elusive: Some say it’s January 3 while others promote January 7. The community of Manitou Springs, Colorado, which originated the event, will hold their annual “Fruitcake Toss” contest in January.

“Watch hated holiday treats fly at this quirky local event,” say the organizers. “This one-of-a-kind event, where enthusiasts traveled from all over to compete for trophies and bragging rights, has been a community highlight for more than 22 years.”“Join in for some old-fashioned tossing of those maybe not so beloved holiday desserts. There will also be a fruitcake costume competition, libations and a fruitcake bake-off!” 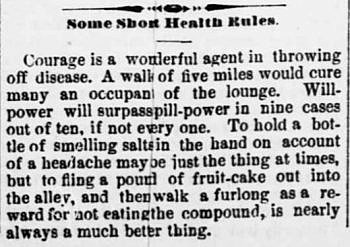 Prizes will be awarded for “distance, accuracy, speed and balance.” Best of all, you don’t have to bring your own fruitcake to the event: “Cakes are available for rent for $1 per cake!”

There’s a song called Fruitcake, performed by a variety of groups including Fred Schneider & the Superions, the Colorado Children’s Chorale and the Eraserheads. Another musical treat, Fruitcakes We Have Known, is performed by Catalepsy.

To one and all – please enjoy National Fruitcake Day safely and prudently. But whatever you do … do NOT EVEN think of sending one my way!