There were carpenters and blacksmiths opening businesses as well in the mining camp south of Helena called Hartford.

We know this solely because John Harris and Robert Bailey documented the events in a short-lived newspaper called the Hartford Weekly Pioneer.

Hartford and another town called Lump Gulch don’t exist anymore. Clancy is the only community to remain from those boom/bust days of gold and silver mining south of Helena.

But back in the day, there was every reason to think Hartford would thrive – even become a town of a thousand or more in population.

The Legal Tender mine was producing “upwards of one million dollars in silver.” The Liverpool mine, “the best developed mine in the district,” was reported to be netting its owners “over $15,000 per month.”

The newspaper owners said: “With this issue The Pioneer makes its bow to the people of Lump Gulch and Clancy districts. We do not know whether we are filling a long-felt want, but if such does exist we will endeavor to fill the gap. 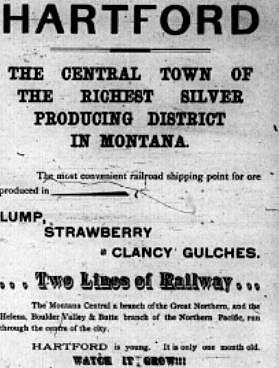 “We do believe that the district of which Hartford is the center is destined to be the richest and most productive silver mining camp in the United States, and we believe that the only way that its resources can be brought before the people is through the medium of a newspaper.”

One of the paper’s first front-page stories was about a “pioneer prospector in Lump Gulch,” a man by the name of Spurgeon. He managed, between 1864 and 1892, to get himself “about $25,000 in the hole.” But then he got his hands on the Prospect mine “and commenced developing the property.”

“Every foot of depth improved the Prospect, until at a depth of several hundred feet, the mine produced enough to not only pay for all its development, but has paid off the entire debt of the fortunate miner, placed a handsome balance to his credit in the bank, and made his interest in the property worth a fortune.”

Mostly, the Hartford Weekly Pioneer saw its role as the town’s biggest booster and wasted no time in declaring its virtues!

“Hartford is well supplied with train service, there being six passenger trains daily, four on the Montana Central and two on the Northern Pacific.” A new $1,500 depot was planned.

Foundations for a new two-story hotel with 20 rooms were being prepared. George Seeley was making additions to his general merchandise store and Stephen Koalke was establishing a blacksmith’s shop.

A reservoir was built with a pipeline supplying the new hotel and store buildings on Main Street with water. A public telephone station was located in the general store, but “a consignment of telephones ordered from the east some time ago” hadn’t yet arrived.

More would be needed, though, to make the townsite a thriving community. A restaurant would be nice – or even a lunch counter. Also “some one should open up a lumber yard at Hartford at once. There is already a great demand for such an institution, and in sixty days more there will be material enough used to keep two good yards busy supplying the demand.”

Now that the new local paper was “afloat on the sea of journalism,” the proprietors encouraged “all our old friends and also as many new ones” as possible to stop by their office and subscribe.

The Pioneer was also ready to “take any orders for job work that may be tendered us, and will execute it promptly and at reasonable rates.”

But things didn’t work out; the paper lasted a mere six months.

In an angry, final editorial on Saturday, July 27, 1885, the Hartford Weekly Pioneer’s owners, John Harris and Robert Bailey, told their readers, “It was expected by the publishers that this district would receive the hearty support of Helena, lying as it does at her very doors.”

“But, on the contrary, the people of that city have lost no opportunity to antagonize and run down a camp whose star today shines among the brightest in the state.”

“There is no grounds for this state of things except pure cussedness, and before the capital city recognizes her mistake Butte will be reaping a rich harvest and Helena be left standing on the wrong side of the ‘mud-hole.”

“We wish it distinctly understood that the Pioneer is not closed down from any fear the publishers entertain as to the permanency of the camp, but simply from lack of support.”

“Not wishing to inflict our tale of woe on a long-suffering public, we let the matter drop, with thanks to those who have supported us and —– for those who have made this step necessary.”