It’s been a while since we’ve perused the writings of one of our favorite Missoula society columnists, “Glitter,” whose scribblings graced the front pages of the Weekly Gazette in the late 1800s.

Glitter was most likely the editor of the Weekly Gazette.

“The Terrors of the Bitter Root” headlined one of her (or his) columns in July 1890.

“The promenades, parks and drives (of Missoula) are deserted and our weary belles and beaux, who were the chief ornaments of these places, have taken themselves from the heart and turmoil of the city to the cool quiet of Lo Lo hot springs.”

“They are now par-boiling themselves in their waters and dining with avidity off such delicacies as ‘camper’s bread’ and bacon, with the addition on Sunday of ‘molasses pie.’”

Another “occasional recreation” in the Bitter Root attracting Glitter’s attention was the manly art of fishing.

At this point, I will pause to mention that fishers of this era were called “nimrods.” I know – today’s slang casts a nimrod as a jerk or an idiot. Back in the 1800s, the definition of nimrod reflected the biblical definition: a mighty hunter.

Anyway, Glitter would often poke fun at the nimrods. 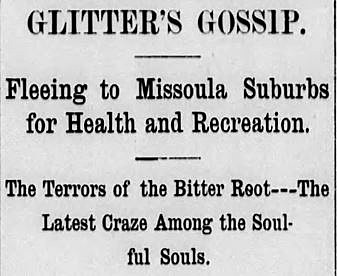 “Two well known Missoula gentlemen (set out in) a boat of a very erratic and spasmodic disposition to angle on a mammoth scale. They floated dreamily downstream for a few hours when one gentleman’s hook was swallowed by a ‘whale.’ ”

“Very much excited both sprang up, and their boat seeing a good chance for escape, gave a convulsive shudder and the immediate consequence was the violent immersion of the two, very much after the good old Baptist plan.”

Another of Glitter’s targets was the “pest of every decade,” the census taker.

“The census enumerator is abroad on our streets with his distressing interrogatories and colossal brass.”

“The ancient lads and lasses, who have hitherto baffled the ingenuity of the previous enumerator, gracefully prepare to do further battle with that redoubtable person. The brisk and buxom widows who, on the lookout for a future partner, are anxious that statistics shall indicate their extreme youth!”

Speaking of extreme youth, Glitter scoffed at those who followed the old saying, “Early to bed and early to rise,” and the claim that staying up late was “conducive to wrinkles.”

There were ways around this, she declared! 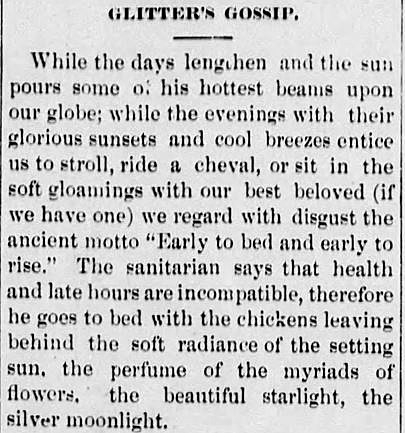 “Stay up as late as you like,” counseled Glitter. “But, be sure to rise at dawn or before. The morning air will bleach and beautify the completion in much the same manner that a piece of linen is whitened by the mid-day sun.

“Then, in the middle of the day, a siesta of say from two to three hours will atone for the night’s loss of sleep!”

Too bad Glitter isn’t around today. Just imagine what advice she’d have for us in 2022!