“Oh! little loveliest lady of mine, What shall I send for your valentine?” (Staunton, VA Vindicator, February 11, 1876)

Can you remember the first valentine you ever sent?

The Butte Semi-Weekly Miner, in February 1889, suspected each of us likely could. After all, “it was when you were an apple-faced school boy and walked a mile every morning to the red school house under the hill.”

It was also likely you were very bashful and “did not often dare to speak to a girl.”

“Blue-eyed Mary, who sat just across the aisle from you, seemed just perfection to you then and you saved up your pennies for some weeks before Valentine day to buy her a bit of lace paper enclosing a colored picture and bearing a gilt motto.”

The newspaper surmised that in later years you might have “come to know Mary better, perhaps she laughed at your valentine…(then, again) … perhaps she never knew who sent it.”

No one is quite sure of the exact origin of St. Valentine’s day. The Anaconda Standard in 1893 quoted lore from centuries earlier that it may have begun in Scotland, England or France in homage to the patron “saint of lovers.”

Young love-struck men were said to have given “gifts of flowers” and to have “written amorous sonnets to their ladies, and their acceptance or rejection told the lover how his suit was regarded by the object of his affections.”

Another theory, this one mentioned in the Philipsburg Mail of 1896, was that Valentine’s Day was a blend of pagan and Christian rituals. The Roman festival of the Lupercalia consisted of banquets, dances and drama but also “a peculiar ceremony in which the young men drew from a box of billets, each inscribed with maidens’ names, each bachelor devoting himself for 12 months to the lady falling to his lot.”

That same issue of the Philipsburg Mail also listed a popular valentine theory about “birds selecting their mates on Feb. 14.”

“The theory was popular for some time until a heartless naturalist knocked it into smithereens by proving that, as a matrimonial season, birds didn’t care any more for the 14th than for the 13th or 15th.”

Further, the Rugby Gazette and East Tennessee News (Rugby, Morgan Co., Tenn.) reminded us, harshly, in 1887, that “The patron saint of Valentine’s Day was beheaded.” It also suggested that “some writers of valentine poetry might appropriately be served the same way.” Geez!

The making of a valentine card was no easy task back in the day. One Brooklyn factory told the local Brooklyn Eagle newspaper it turned out 15-million of these comic cards every year – three times the number of sweet and sentimental cards.

The company remarkably employed a single “poet” who was responsible for producing “in six months 2,000 comic verses and 500 verses of sentimental poetry.”

“It is said that valentine poetry is difficult to write, and if this be true the composer of 2,500 verses averaging eight lines each, is entitled to no little consideration!”

While many of the old practices have lasted through modern history, there was one variation on the Valentine’s card in the late 1880s that thankfully hasn’t. 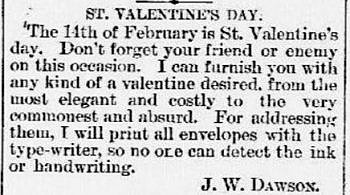 The Daily Yellowstone Journal (Miles City) ran a story about a common practice of “venting a petty spite” by sending a “comic valentine” to someone you didn’t like. The so-called “comic card” was anything but funny.

It was “descriptive of (the recipient’s) principal fault or weakness,” which would likely make the recipient mad and cause him/her to “search for the sender!”

The writing of poetry and the giving of flowers are still a big part of modern Valentine’s Day customs. So are dances, but – what happened to the cake walk?

The Dillon Tribune in 1884 told of the city’s “Valentine Festival and Cake Walk” at the local high school. “St. Valentine will open a post office in High School Hall, and everyone will receive a valentine.”

“Gentlemen and ladies wishing to send valentines to friends in town can do so through St. Valentine’s office. The ladies in charge of the office will charge gentlemen ten cents and ladies five cents for delivering the valentines. No recipient of a valentine will have to pay more than two bits. 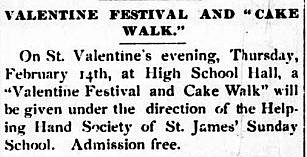 ”A special and amusing feature of the evening will be the ‘cake walk,’ which is conducted as follows: Some 25 or 30 cakes, nicely placed, will be provided. One cake will be placed on a table and an alarm clock, set to strike every three, five or 10 minutes. Four boys are stationed, one at each corner of the table – one boy holds a flag.

Here’s to bringing back the cake walk!