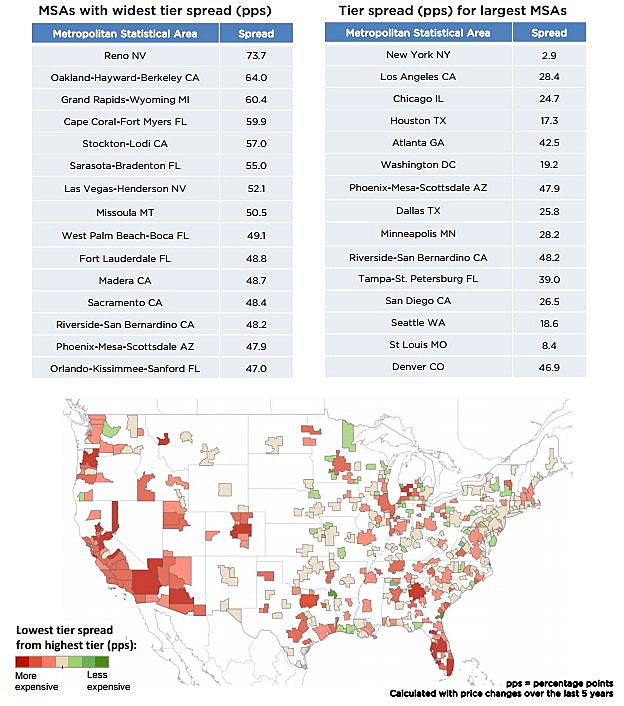 The housing market in Missoula claims one of the widest gaps between the cost of entry level homes and those listed at the upper tier, placing greater demand on affordable housing and further pushing up home prices.

That’s according to data released Tuesday by Nationwide in its Health of Housing Markets report, which analyzed market conditions and trends in 400 metropolitan statistical areas.

Missoula ranked 8th in the study among cities with the widest spread behind Reno, Oakland, Las Vegas and Fort Meyers, Florida. It’s a dubious distinction that comes as the city takes steps to address its rising housing costs.

“Since the recession ended, Missoula’s supply of homes hasn’t kept up with demand, particularly in the more affordable price ranges,” Sam Sill, public affairs director for the Missoula Organization of Realtors, said Tuesday. “This has caused median home prices to increase rapidly over the last few years.”

“This makes Missoula a less inclusive place as many families who work here can’t afford to buy a home here,” said Sill. “It also holds back economic development by making it more difficult for employers to meet their workforce needs.”

According to the Nationwide report, national home prices related to entry-level housing, where most first-time buyers start looking, have increased 56 percent over the last five years. Over the same period, the value of the highest tier has climbed 33 percent.

The difference has grown since 2012 as entry-level homes grow more expensive. The study suggest strong demand among first-time home buyers is helping drive the disparity.

“Home price gains across the country continue to be more rapid, on average, for the lowest price tier of homes – often an entry point for new homeowners,” the study suggests. “Outsized gains for this segment raise home values for homeowners but reduce affordability for potential buyers.”

Not since 2005 – and 1987 before that – has the gap between the lowest- and highest-priced housing tiers been so drastic. Following those years, the study said, growth in housing costs slowed and saw a tightening in the gap between price tiers.

That trend isn’t expected in Missoula any time soon as the demand for affordable housing outpaces supply. And while the rising cost of entry-level housing is good for homeowners, it’s not so good for those looking to break into the market and start building equity.

It’s something both the city and community partners, including the Missoula Organization of Realtors, are looking to resolve through a new study. Making Missoula Home is expected for release this year.

“The goal is to come up with some strategies to increase the supply of housing, particularly in the more affordable price ranges,” said Sill.”We have made much progress since we started the study in mid-March, and our goal is to have policy recommendations ready to give to the local governments by the end of the year.”