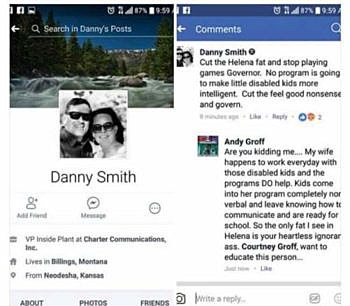 A Facebook post by an executive with Charter Communications criticizing Gov. Steve Bullock’s proposed budget cuts received widespread criticism from across Montana, with comments calling it “disgusting” and “outrageous.”

Earlier this week, Danny Smith, an executive with Charter Communications in Montana, called upon the governor to “cut the Helena fat and stop playing games” as the state looks for ways to trim its budget.

“No program is going to make little disabled kids more intelligent,” Smith posted while identifying himself as the vice president of Charter’s office in Billings. “Cut the feel good nonsense and govern.”

“The views expressed are not Charter’s,” Picciolo said in an emailed statement. “He doesn’t speak for the company. We do not comment on personnel matters.”

Facebook users across the state expressed dismay over Smith’s comments. Among them was Sabrina Wisher-DeWitt, the mother of a disabled woman who said her daughter “has touched more people in her own way and loved them each unconditionally.

“I am beyond speechless,” Wisher-DeWitt said. “This selfish piece of work wants to take shots at special-needs children that can’t even defend themselves!”

The father of a disabled son said, “Class act he is. Apparently he thinks my son is the ‘fat” that needs to be cut from our state budget.”

Other Facebook users threatened to cancel their Charter service and several said they had already done so.