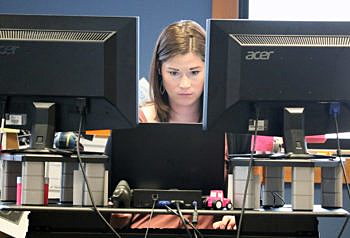 The Missoula Economic Partnership this year secured an outside firm to help attract new businesses to the community, an effort that could create several hundred new jobs and up to $400 million in new capital investment, the organization’s president and CEO said this week.

In its annual meeting with investors, MEP offered a snapshot of its activities over the past year, including entrepreneurial assistance and a push to help established businesses meet their growth needs.

That latter effort saw local firms secure more than $1.6 million in economic development grants from the state, which have generated roughly 160 new jobs across the city.

“A company is eligible for up to $7,500 per job created, and to receive that dollar amount, the job has to exceed the county median wage rate, which right now is about $18.50 an hour,” said James Grunke. “These jobs are all above that dollar amount.”

MEP took over the administration of grants awarded through the Big Sky Economic Development Trust Fund in 2016. Among the largest recipients of the grant was Consumer Direct, which received $268,000 to create 46 new jobs.

“They have a brand new application in for 50 more jobs they’ll be adding in our community next year,” Grunke said. “Helping existing businesses grow is a vital economic development strategy.”

Grunke said the partnership’s efforts to attract new businesses to Missoula are also showing success. As it stands, he said, MEP is currently working with eight businesses looking to locate in Missoula.

“If successful, we’ll have the creation of about 400 new jobs and $400 million in new capital investment in our community,” he said. “We like to have an active queue of business attraction efforts of four to six that we’re always doing. Right now we have eight. Some will happen and some will not happen, but we feel strongly that we have to have a lot of interaction.”

Grunke wasn’t at liberty to identify the companies looking at Missoula, though the city is on the short list for one of them.

“One of these companies came to us for a site visit through the governor’s Office of Economic Development,” Grunke said. “They brought the company to Montana, and Missoula is on their short list of places to go. We have a very robust business attraction effort.”

Despite the partnership’s success over the past year, its leaders see challenges to be addressed. A workforce shortage stands among them, as does the cost of housing.

On Tuesday, MEP unveiled is State of the Workforce Study, the first step in addressing the challenges faced by local companies looking to fill vacant jobs. Later this year, the Missoula Organization of Realtors, in partnership with MEP, is also expected to release a parallel study on the city’s housing issues.

Scott Burke, president and CEO of First Security Bank of Missoula and board chair of MEP, said air service also remains a challenge. A task force is working to address it by establishing a revenue guarantee that can be used to court new service.

“One of the things we’re also seeing in our role of economic development is our lack of developable industrial park space – office space,” said Burke. “It’s becoming a bigger and bigger challenge when we’re competing with other markets.”

One of those competing markets, based in Oregon, has 6.1 million square feet of walk-in space currently available, Burke said. While Missoula has very little to offer, efforts are underway to create new infrastructure at Missoula International Airport to create a new industrial park.

Innovation centers are also on the radar of local economic leaders.