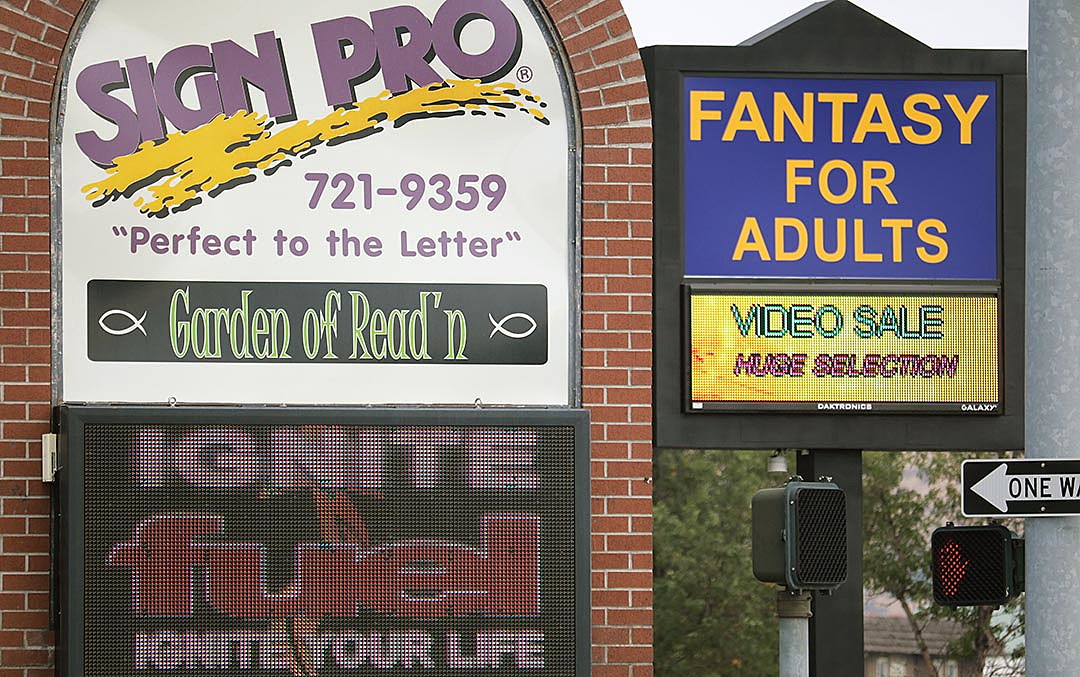 Irritated by those inflatable signs that bend and flutter in the wind? How about “human signs,” those sign walkers who advertise everything from going-out-of-business sales to tax preparation? Mobile billboards?

No one testified in opposition to the revised regulations, and a city planner said all business owners who contacted her with concerns had their objections addressed.

It’s a lengthy ordinance at 55 pages, one that City Council members praised for the attention to detail shown by planner Jen Gress, who presented the major changes prior to Monday’s public hearing and final vote.

Here’s a link to the full ordinance.

The intent of the new rules is to not only reduce distractions to drivers and enhance public safety, but to safeguard the city’s scenic vistas and to protect citizens’ First Amendment rights.

There’s a long list of prohibitions, including: searchlights; signs that mimic traffic signals; animated, flashing, blinking or scintillating signs; roof signs, mobile and dynamic display billboards; and vehicle signs when they’re in the public right-of-way, public property or on private property visible from the public right-of-way.

Also outlawed are portable changeable copy signs; inflatable signs; any sign that moves or gives the appearance of moving; and any signs that “flutters, undulates, swings, rotates, oscillates, or otherwise moves by natural or artificial means.” That includes balloons, pennants, streamers, wind signs and spinners – but not the national or state flags.

Banners are off limits, except on fences.

There’ll still be plenty of signs advertising, directing, warning, informing, celebrating and congratulating all manner of goods, services and events.

City planners undertook the mammoth project because of the U.S Supreme Court’s 2015 ruling in Reed vs. the town of Gilbert, Arizona.

In that case, the Good News Community Church placed a temporary sign to advertise its various meeting locations, even while Gilbert’s sign ordinance prohibited the display of outdoor signs without a permit. At the same time, however, Gilbert’s codes exempted nearly two dozen categories of signs, treating each one differently.

The church filed suit and the Supreme Court ultimately ruled that Gilbert’s sign ordinance was “content-based,” therefore violating the church’s First and 14th amendments. The decision forced cities across the country, including Missoula, to rework their sign laws to ensure they were “content neutral.”

So Missoula’s new ordinance does not address, or even mention, the wording of signs. Instead, it regulates signs based on their size, location, number, lighting, duration and timing.

There are rules for hanging signs, directories at multi-tenant buildings, window signs, the use of awnings for signage, sidewalks signs outside downtown businesses, signs at gas stations, signs at drive-thru windows, banners and billboards.

Ward 4 Councilman John DiBari lauded Gress for her “high-level attention to detail” in assembling the new rules, and for adjusting the ordinance “to be responsive” to the court and local businesses.

Said Councilwoman Michelle Cares, “Every person who contacted the city about this ordinance had their concern addressed.”

Mayor John Engen said he, too, was “grateful for the attention to detail.” He noted that the lack of public comment was an indication that the “public has been heard” and public concerns were addressed before Monday – especially when an ordinance is so lengthy, detailed and impactful.